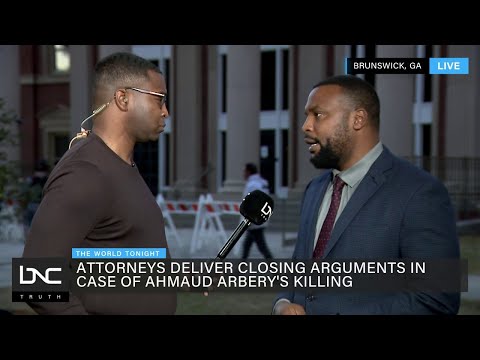 A defense attorney representing two of the men accused of killing Ahmaud Arbery is facing backlash for comments she made about Arbery’s toenails.

Laura Hogue is representing Gregory McMichael, according to CNN. During closing arguments on Monday, Hogue said, “Turning Ahmaud Arbery into a victim after the choices that he made does not reflect the reality of what brought Ahmaud Arbery to Satilla Shores in his khaki shorts with no socks to cover his long, dirty toenails.”

The comments caused Arbery’s mother, Wanda Cooper-Jones, to leave the courtroom while saying, “I gotta get out of here.” During the trial proceedings, Cooper-Jones has been emotional as she watched the video of her son’s death multiple times.

Arbery’s family and attorneys spoke about Hogue’s comments outside of the Glynn County Courthouse on Monday. Cooper-Jones said the comments were beyond rude. “Regardless of what kind of toenails he had, what size legs he had, that was still my son and my son actually was running for his life in that description,” she said.

Attorney Lee Merritt spoke with BNC and said the attacks on Arbery were personal and low. “At this point, there should be complaints made to the bar,” he said. “These attorneys are far outstepping the lines of professionalism.”

This is the latest comment made by the defense that has sparked outrage and shocked listeners. During witness testimony, Kevin Gough, the attorney for William Bryan Jr., objected to the presence of Rev. Al Sharpton and Rev. Jesse Jackson multiple times. He also made headlines when he said the trial did not need any more “Black pastors” sitting in the courtroom, accusing them of intimidating the jury.

Race plays a central role in the case as the McMichaels and Bryan are accused of chasing and killing Arbery, a Black man. They allege they were making a citizen’s arrest because they thought Arbery was guilty of a crime, but the prosecution has poked holes in their defense.

Travis McMichael took the stand Thursday and when cross-examined by the prosecution, he revealed he did not see Arbery with a weapon and the lone Black jogger did not threaten him.

The prosecution is expected to offer a rebuttal to the defense’s closing arguments Tuesday before the case is turned over to the jury.

RELATED: Only One Black Juror Selected to Sit On Trial For Arbery’s Accused Killers

If you or someone you know is struggling from trauma triggered by this story, resources are available here.