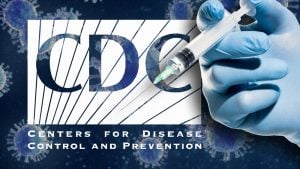 Del Bigtree: CDC Cannot Prove That COVID Vaccines Do Not Cause New Variants

This article was originally published by Ramon Tomey at Natural News.

The Centers for Disease Control and Prevention (CDC) cannot prove that Wuhan coronavirus (COVID-19) vaccines do not cause new variants, claimed “The HighWire” host Del Bigtree.

The Informed Consent Action Network (ICAN) CEO cited the public health agency’s website itself that talked about “myths” related to the COVID-19 vaccine. The CDC website debunked one such myth by stating that the shots “do not create or cause variants of the virus that causes COVID-19” and instead “help prevent new variants from emerging.”

“New variants of a virus happen because the virus that causes COVID-19 constantly changes through a natural ongoing process of mutation (change). As the virus spreads, it has more opportunities to change. High vaccination coverage in a population reduces the spread of the virus and helps prevent new variants from emerging,” the CDC website said.

ICAN’s challenge came in the form of a Freedom of Information Act (FOIA) request sent to the CDC by attorney Aaron Siri, legal counsel for the group. Siri’s March 8 request called for the agency to provide “all documents sufficient to support the immunity conferred by COVID-19 vaccines does not contribute to virus evolution and the emergence of variants.”

“We put in an FOIA request demanding to see the evidence that these vaccines do not cause viral variants. They have a fact, they’re the scientists, they’re the arbiters of truth. Lay it on us: How do you know this?” said “The HighWire” host.

However, the CDC sent a rather disappointing reply to Siri. “A search of our records failed to reveal any documents pertaining to your request. The CDC’s Emergency Operations Center and the National Center for Immunization and Respiratory Diseases conducted searches and found no records responsive to your request,” said the public health agency in its reply.

“[Now, the CDC says] ‘We don’t have a single document on this planet or in this place that can explain why we put this on our website. We’ve never even had a conversation [or] an email we can send you. We have no evidence that this vaccine doesn’t cause variants, yet we will put it on our website,” Bigtree said.

“If that’s what a fact is, which is simple wishful thinking by a bunch of nerds inside of our government – man, are we in trouble.”

Vaccines causing the emergence of new variants is no disinformation

According to Bigtree, the possibility that the COVID-19 vaccine is causing the emergence of new SARS-CoV-2 variants is no disinformation. He cited the predictions of Belgian virologist Dr. Geert Vanden Bossche, who claimed that a new mutant variant may be able to bypass immunity conferred by the COVID-19 shots and become the dominant strain.

“[Vanden Bossche] is very specific; that’s what he thinks. He’s predicting that this variant could be driven … by a leaky vaccine that is not neutralizing [the virus]. The variants that have happened so far [show that this virus] is just an incredibly strong and capable virus that can mutate and change almost at will, especially under this massive pressure that Vanden Bossche has been talking about.” (Related: Yes, covid vaccines are spreading variants.)

“There’s this terrifying possibility that we could see massive increases in serious illness and death amongst those who are vaccinated – and there are multiple reasons given here why that would be the case. We’re worried about these variants being driven [by the COVID-19 shot].”

Bigtree also quoted the Belgian expert, who previously appeared on his program to share his thoughts. “If I was going to develop some sort of scientific experiment that would pressure [the emergence of] a viral variant, this is what I would have done: Vaccinate everybody, including the children.”

The ICAN CEO also decried how information about the COVID-19 vaccines – just like the CDC’s claims – was impossible to be questioned. Any valid criticism of the shots could simply be dismissed as “misinformation.”

“You can’t sue a vaccine, you can’t get near it. No one was able to penetrate this Fort Knox that’s been built around the proprietary information about vaccinations and the truth. This is the world that we live in. The very same government that has a disinformation board running right now, that [Sen.] Rand Paul [R-KY] is rightly grilling on, [has] this idea [that] they are the arbiters of truth. The definition of fact is clearly under attack, and we are going to do something about it.”

Watch the full segment of “The HighWire” with Del Bigtree below.

This video is from the High Hopes channel on Brighteon.com.

The post Del Bigtree: CDC Cannot Prove That COVID Vaccines Do Not Cause New Variants first appeared on SHTF Plan - When It Hits The Fan, Don't Say We Didn't Warn You.
Source: shtfplan.com

Del Bigtree: CDC Cannot Prove That COVID Vaccines Do Not Cause New Variants