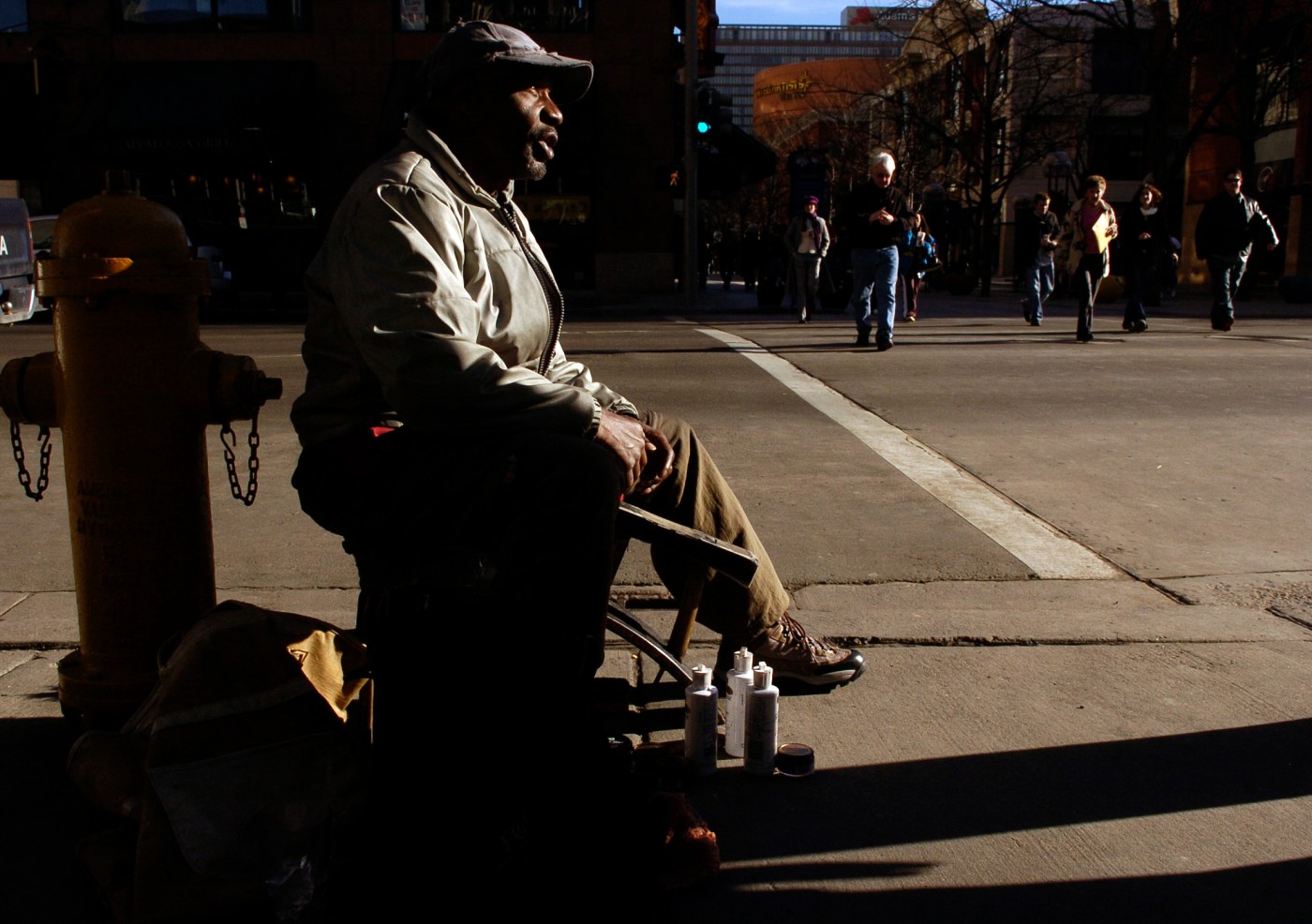 Claude Thompson, a jovial and popular shoeshine man who worked Denver’s 16th Street Mall for more than 20 years and who was known for his drawn-out signature call “shoooe shiiine,” as well as his quick wit and foot-wear criticisms, has died in Denver. He was 69.

Thompson typically worked the corner of 16th and Welton streets downtown where businessmen, politicians, cops and even tourists, were among his loyal spit-shine clientele. Thompson died on Feb. 28 of natural causes, according to the Denver Office of the Medical Examiner.

A fixture on the mall, Thompson was known to enthusiastically greet longtime customers, many by name, while taking digs at male passersby who happened to be wearing battered shoes, sneakers or worse yet, sandals.

“Sandals are ridiculous,” Thompson told The Denver Post in 2008. “What is this, Roman times? You see anyone wearing a toga?”

Thompson, who graduated from Manual High School in 1968, was the self-proclaimed “king of the shoeshines.” He’d sometimes wear a red crown atop his head.

In September of 2020, a GoFundMe page was started to help Thompson’s “small business,” which was hit hard by the pandemic as foot traffic in the city plummeted. The GFM page, started by REV Energy Services and Oil Connect, along with other oil and gas businesses and individuals, raised $9,444 of a $10,000 goal.

Salutes to Thompson, as well as condolences offered to his family and friends, have been posted on social media.

“My favorite line was, ‘Who you expect to pick up with those shoes??’ ” said Dale Larsen, a senior business development manager, on REV Energy Services LinkedIn page. “Rest in Peace” was a sincere and popular comment.

Thompson offered a “lifetime” shoe shine, for about $30, and he’d memorize the customer’s face and note the name in a notebook. For a single shine, Thompson typically charged five bucks. Many of his lifetime customers were known to leave $5 tips, or more.

As groups of businessmen would walk by Thompson was known to yell, “What’s the best membership?”

“Lifetime!” they’d call back. Lines of customers often formed at his sidewalk business location, set up on the shady side of the street during the summer and on the sunny side in the winter.

In 2009, Thompson was told by the city that he’d have to purchase a $550 permit to operate his business on the mall. Instead, he started a signature petition against the permit and he moved his shoeshine box and equipment halfway up Welton Street to avoid being non-compliant. Thompson was determined to carry on, on the Mall.

“I’ve been here longer than many of these businesses on the Mall,” he told the Post. “It’s not fair, them trying to deny a man a living. What gives them the right?”