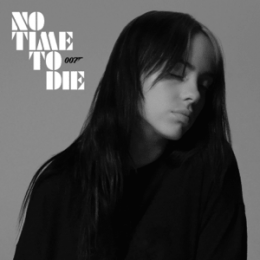 Billie Eilish’s “No Time to Die”

Never afraid to wring every drop of money out of a pop sensation, this is who the film industry is having sing the theme to the new James Bond film, No Time to Die. The media is billing this interestingly; the New York Times covered the song with glowing praise and a mention of Eilish being the youngest person to ever record a Bond theme. The implication is that Eilish is molting out of her indifferent, teenaged shell, and becoming a regular pop icon to be enjoyed by Zoomers and Boomers alike.

This is true from a commercial standpoint. But it’s hardly something to commend. The Billie Eilish story is rare in the sense that she is one of the first precocious young musicians to livetweet her rise to stardom. We can tell that she’s overwhelmed, and we can tell that she’d often rather be doing different things. But the very nature of the pop music industry demands that she continue doing more, more, and more; hence the Bond theme. Drivel about celebrities aside, this young woman continues to make the case for just how absurd the entertainment industry is.

I touched on her debut album earlier, and how it’s mostly inane filler. This Bond theme is a similar exercise in snooze. Johnny Marr features as a guitarist on it — apparently — delivering a barely-discernible guitar riff behind the characteristically bland scoring of “Hans Zimmer,” or more appropriately, “Hans Zimmer’s team of uninspired ghostwriters.” We get a quiet song that a normie would describe as being “orchestral,” one impressive display of range from Eilish, and then Marr is so gracious as to pluck the familiar Bond riff at the end of the spectacle. The track has a smoky, near-unfinished quality to it. The affected introspection and brooding in Eilish’s voice seems more like a farce than any kind of vocal foreshadowing of the doom awaiting 007, as the Times seems to think of it.

It’s possible to make surface-level comparisons between Eilish’s moody aesthetic and the crisp grime of the Bond universe all day long, but it should be apparent to anybody with ears and eyes that Eilish was chosen for this role as part of a thinly-veiled marketing ploy. Young people recognize their idol, their parents want to see another James Bond film anyhow, everyone goes to the theater, and everybody wins. This has been how the Bond theme has operated since it became a tradition. Usually, we at least get some kind of epic pop hit out of the effort; there’s nothing of the sort from Eilish this go-around.

Consider the performance of Adele on “Skyfall,” the electropop revue “Die Another Day” from Madonna, or, if we’re reaching into the past, the quintessentially 1980s “A View to a Kill” from Duran Duran. Bond themes reflect not only the moods of the film they’re composed for but also reflect musical trends that mark the times. None of these tracks are particularly thrilling, but they’re also not completely unforgettable. “No Time to Die” falls short of even these low expectations. It’s a somber half-ballad supported by an aging film scorer and a guitarist from an 80s British band. (Let the record show I love the Smiths, but Marr is simply inappropriate here.) If “No Time to Die” is indicative of the quality of the film, then we had better brace ourselves for one of the least enthralling Bond works yet. The series seems to have taken a bit of a dive in quality, something noted by Lynch in his review of Spectre, but at least 007 isn’t black yet.

While “No Time to Die” is not a good Bond song, or a good song more generally, this isn’t necessarily a critique of Billie and Finneas’ songwriting prowess. The two certainly have chops; I suspect that were they not under the pressure to record a pop album, the siblings would have had a long career producing moody club jams paired with Billie’s ASMR-inducing whispering. But the brother-and-sister duo are still young Californians who are used to writing sun-soaked indie tunes or pop beats, as is the case with Finneas, or introspective takes on minimalism, as is the case for Billie. Neither of them are phenomenal composers. Very few chosen to pen a Bond theme could be considered phenomenal composers.

More accurately, and perhaps more poignantly, the lackluster quality of “No Time to Die” is a damning indictment of the Bond theme tradition and the state of pop music itself. The selection of Eilish for No Time to Die’s theme is a reflection on how quickly the entertainment industry is collapsing under the weight of its pretenses and business models. Stuck in the precarious situation of having to market a film designed for a target demographic that is quickly vanishing in North America and Europe, their only hope is to pull out all of the stops in terms of star power and hope it gets folks into the cinema.

The Bond themes are a prime example of just how soulless the cosmopolitan capitalist hegemony can be. The motifs of our culture are determined by who was most commercially successful in the year prior.

Billie Eilish’s “No Time to Die”