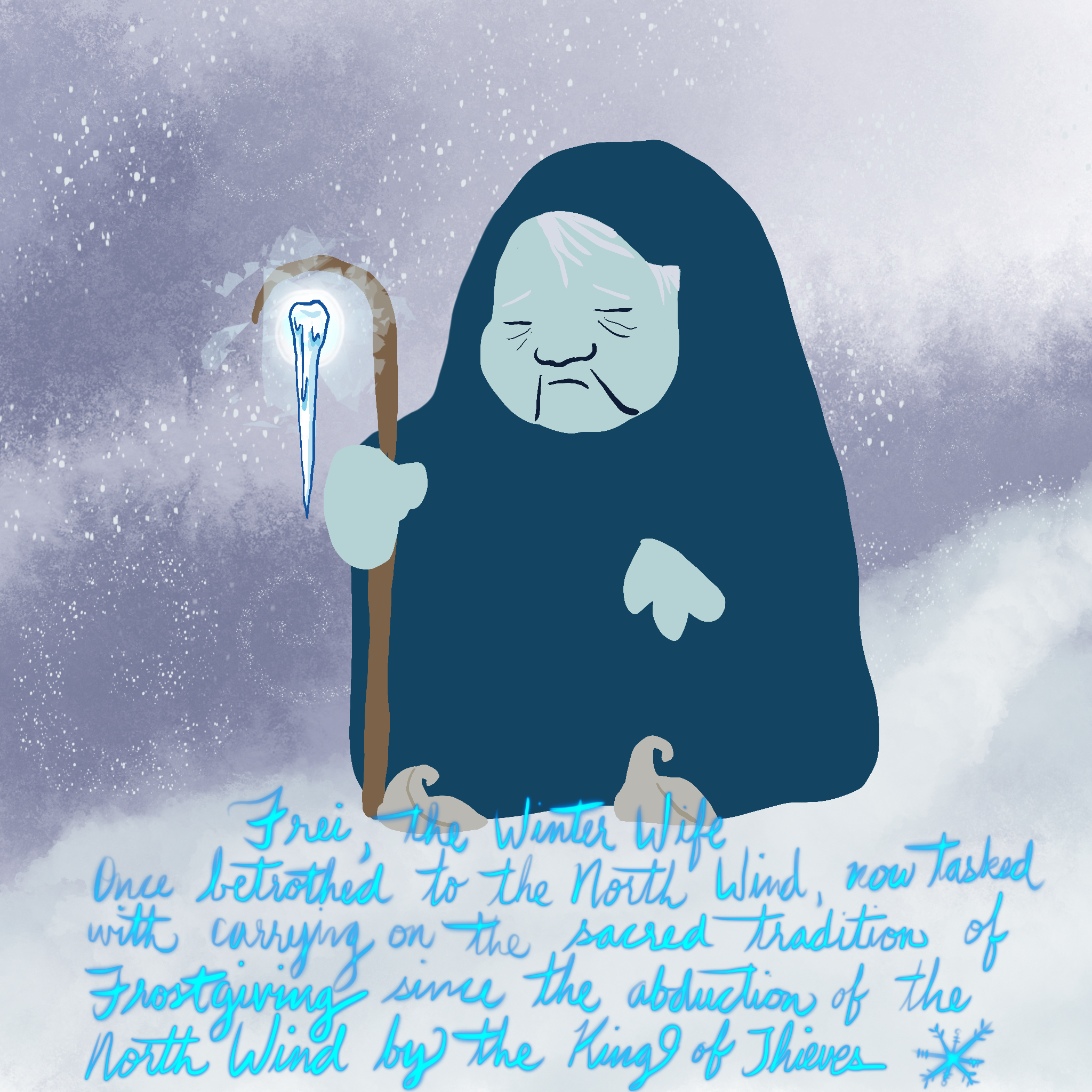 Warning: If you browse this on terrible mobile internet, it’s gonna be slow, because some of these images are annoyingly huge. That said:

It’s time for more Dicember posts! My first post, a d12 roll table of magical arrows, can be found here. This time around I’ll collect and expand on the recent batch of image offerings which I originally posted over on Twitter/Instagram. However, that’s not all! Day 5 is all new, and it’s at the bottom of this post. If you’ve already followed along elsewhere you can skip ahead to the appropriate heading below.

Frei: her slippered footfalls herald the sunless days of winter. In her wake settles the cool mist of night, and traces of her sorrow can be found in the sparkling hoarfrost that clings to windowpanes and twigs and branches, bare in their seasonal slumber. She is the wife of the North Wind, who is held captive by the King of Thieves in the ornate flying estate he stole from a djinn. Too frail to rescue him herself, she carries out her wintry duties with a heavy heart, crystal tears glittering off her cheeks.

If brave souls were to rescue the North Wind from the clutches of the King of Thieves, who considers his famed abduction of the Wind to be his crowning heist, Frei would be overjoyed. She would handsomely reward such intrepidity, gifting them her Chillbranch. The Chillbranch is a gnarled rod of rootwood with a pristine icicle held aloft by magic. Its frosty glow can freeze pathways across water, wilt plants, and even summon blizzards.

A d6 roll table – or, if you like, a drop table! The prompt was Child, which I felt a twinge of anxiety over for a half a second before inspiration hit. I wanted to incorporate a few takes on children rather than being strictly literal. The entirety of this was constructed in Photoshop while watching 8-Bit Christmas, which is a cute film in its own right. A few of these are based on cryptids, one of which hails from the same part of the world as I do. Some of these might be friend, some might be foe, some might herald the end of times for your campaign!

Inspired by the suggestion of some historians that berserkers entered their furies by drinking tea of psychedelic mushrooms or possibly overindulgence of powerful liquor, I wanted something of a Mediterranean or North African sort of slant on it.

I imagine it sort of as a cursed bronze vessel which hisses like a supernaturally-malicious kettle when filled with wine. Any wine, from the rarest vintage of the wealthiest collection to the humble pressings of a destitute farmer, becomes imbued with hatred and rage by the violent presence trapped in the flagon. Spectral, threatening steam billows from it when its stopper cap is removed, filling the air with sharp, indistinct whispers that urge those who partake to violence.

So far, Dicember is not just a way to confuse and frustrate my phone’s keyboard while it tries in vain to suggest Dicembre over and over – it’s also been a lot of fun! I have really enjoyed the prompts so far and the freedom to do things besides just ink art or whatnot has been very freeing and a lot more amenable to my horrendously overstuffed schedule. Kudos to Dyson for this format!

If you’re feeling up to it, head on over to Dyson’s blog for the official prompt list and get on board with us; there’s a number of us on Twitter posting links to our blog posts and there’s more besides simply doing this on IG and Twitter just the same.