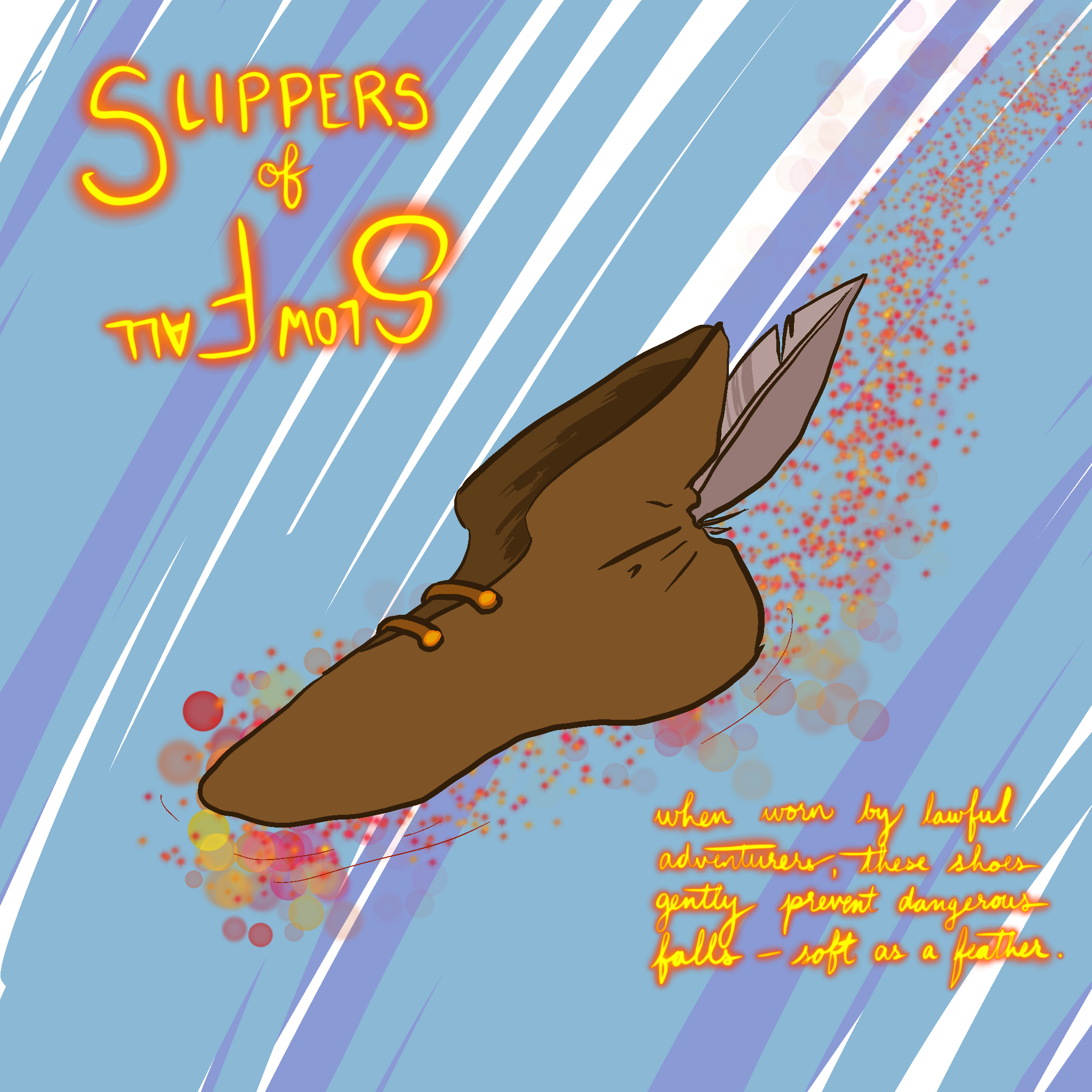 It’s very nearly Christmas! Dicember has really breezed by. I haven’t had to fight uphill on too many of the prompts so far, though some have obviously been more laborious to realize than others.

I’m going to be real here: I just liked fussing about with the silly brush that makes the dots and the neon glow effect. Wear the slippers, and any fall that would be damaging is reduced to a very slow descent; these can’t protect you from the spikes in the pit but they can make sure the fall takes long enough to come to grips with that reality. Effect may happen only once per day and is automatic. Certainly nothing groundbreaking in this one!

Here’s a location for you! The Tower of the Evening Wing has some treasure, some monsters, some rudimentary factions, and even a young dragon.

The Tower of the Evening Wing is a local nickname for a ruined stone tower, formerly a religious site where scholarly priests shared the wisdom of the mountains and the rivers with the nearby villages and farms. In the years since the collapse of the monastic order, the charms and seals preventing the buried from rising as cursed ghouls have faded and the tower has gained a fearsome reputation as a haunted site; locals have become too afraid to go near it and treasure hunters seem to have a bad habit of going missing and joining the monstrous ranks of undead. What’s worse, the farms and villages in the neighboring countryside claim to see the shadowy silhouette of a dragon who attacks their herds of sheep and donkeys in the sunset hours of the evening take up residence here in the tower!

The first floor is accessible only from the front, past a facade of marble with finely-constructed pillars, which lay at the top of a very gentle slope where overgrown stairs overlook a steady river. This level is a burial chamber, serving as a reverent area where pilgrims and wisdom-seeking locals would have once passed by the sages of yesteryear and made dutiful offerings of prayer and symbolic gifts of food to these dead seers. Stone sarcophagi with fading paint, and burial alcoves and compartments, line the walls of a mostly-open floorplan. Here, many of the once-venerated dead stir once more as plodding zombies (4d4). This is because one of the priests interred here was under an evil curse when he perished and the charms sealing this place from the curse’s evil influence failed after its abandonment. This priest now stalks the floor as a ghoul. The open sarcophagi contain the following treasures: 1000gp spread across many small pouches, 12 electrum chalices with Greek key engravings worth 250gp each, 17 necklaces of semi-precious stones worth 40gp each.

The next floor, formerly priestly dormitories, is accessible only by a secret, booby-trapped rear entrance in the rocks behind (swinging blades save vs breath or 1d10 damage, trick stairs that send the unwary back towards the blades, caltrops 1d4 damage), but now plays home to a band of thieves (3d6, as 1st level fighters) who use it as a base far from the prying eyes of locals. They raid nearby roads and farms and have become fairly cavalier about hiding their tracks as locals do not venture to the tower. During daytime they have a 50% chance of all thieves being present, and at night they have a 75% chance of all thieves being present, as local merchants primarily move during sunny hours. Regardless of the time of day, 1d4 wounded thieves (as 1st level fighters with reduced HP; always last in initiative order) are present in varying states of exhaustion and convalescence. Unfortunately for the bandits, the levels above their own are even worse and their number has dwindled as a result of attacks from the third level. They’ve heavily barricaded the staircase up to the third floor. The thieves are not unreasonable: they are fairly low on food, and they are terrified of the floors above them. Their purloined treasures include: 2400gp in two chests, 10 bolts of red silk worth 200gp each, a pound of extremely fine indigo pigment worth 500gp, a golden figurine of a foreign god with the head of an elephant and a star-like halo around its head; a stockpile of cheap spears, daggers, and axes once owned by caravan guards.

Here a platoon of kobolds (8d6) have taken over a floor that once housed rooms for prayer, debate, yoga, meditation, and other scholarly and pious pursuits. They have piled bales of hay and wool in corners to cushion dragon eggs in their care. Of their number, 25% are are occupied tending to the eggs, staying close to keep them warm, while 25% are resting nearby awaiting their shift to incubate the eggs. The other half stand guard, similarly divided into a day and a night shift. Before the thieves moved in below them, they completely converted the stairs going up to the fourth floor with planks and dirt to make rolling the eggs down safer. They zealously worship their dragon master and guard the eggs with their lives; they believe the thieves below are adventurers who seek to steal or destroy the eggs and have launched several raiding parties to eradicate them. They could potentially see the value in others clearing out the thieves and opening the path for more hay and dirt, as they are running out, but those who did so might have a hard time convincing them they mean no harm to the eggs in turn. They have no treasure, though the ruined contents of the meditation rooms contain six landscape paintings of superior quality worth 1500gp each which the kobolds are utterly disinterested in.

Phixi Linnebell is a victim of bad timing, having braved the dangerous rear entrance of the tower in the days before the drake, her kobolds, or the thieves took up residence here. Her plan was to study the entirety of the abandoned Grand Librarium, searching for powerful occult secrets; as a result, she ferried in several months worth of food over the course of several trips even as the locals supplying her in nearby villages declared her crazy for approaching the haunted tower. Unfortunately, a young dragon named Duskwing roosted in the level above her and the drake’s kobold servants came soon after. She is a decent magician and a great liar, and convinced Duskwing the drake of her value and brokered an uneasy truce that allowed her to continue studying the works of the sages in exchange for her promise to defend the roost with her spells; she is now uncertain of what her future holds as she is running low on food – but, worst of all, a magically-trapped book she attempted to read blinded her (at least temporarily) and she fears the kobolds telling the dragon this news. She has gotten good at finding her way around by sound, memory, and spells, but she is uncertain as to what the dragon may do to her if she does not or cannot uphold her end of the bargain. She has locked the doors of the Grand Librarium to prevent any news leaking to the dragon, but her food supplies may change that soon. Above all else, she is utterly determined to keep the books here from falling to any harm.

5F: Roost of Duskwing the Drake

Duskwing is a fairly young dragon (at least by draconic standards) who has taken over the ruined top floor of the tower, where the roof stones were crumbled by a devastating lightning bolt many believe to have been a sign from the gods and the cause of the collapse of the order of monks that once dwelt here. Duskwing decided the place would make for an excellent roosting place and has been raiding the countryside for delicious sheep and the occasional wealthy merchant ever since. Duskwing wishes to be left alone to hatch a brood and eventually to claim the whole of the region as her territory. For this, she needs her kobold vassals left in peace. She is insecure about her power, having been ousted from her original territory by a stronger and older dragon. Duskwing is arrogant, but not stupid; she does not fully trust Phixi Linnebell, especially with regards to the kobolds, and expects to have to kill her eventually.

Happy Christmas Eve, everybody! If you manage to pick through this rambling adventure site and make something of it at your table, please let me know; I’d be curious to hear how you laid out the floors, if anything useful could come of the factions given the fact that the transit of the tower may be unidirectional depending on how you map it, and so on. I’m curious how it plays at your table. Anyway. Happy Christmas Eve and shout at me on Twitter @dungeonspossums.