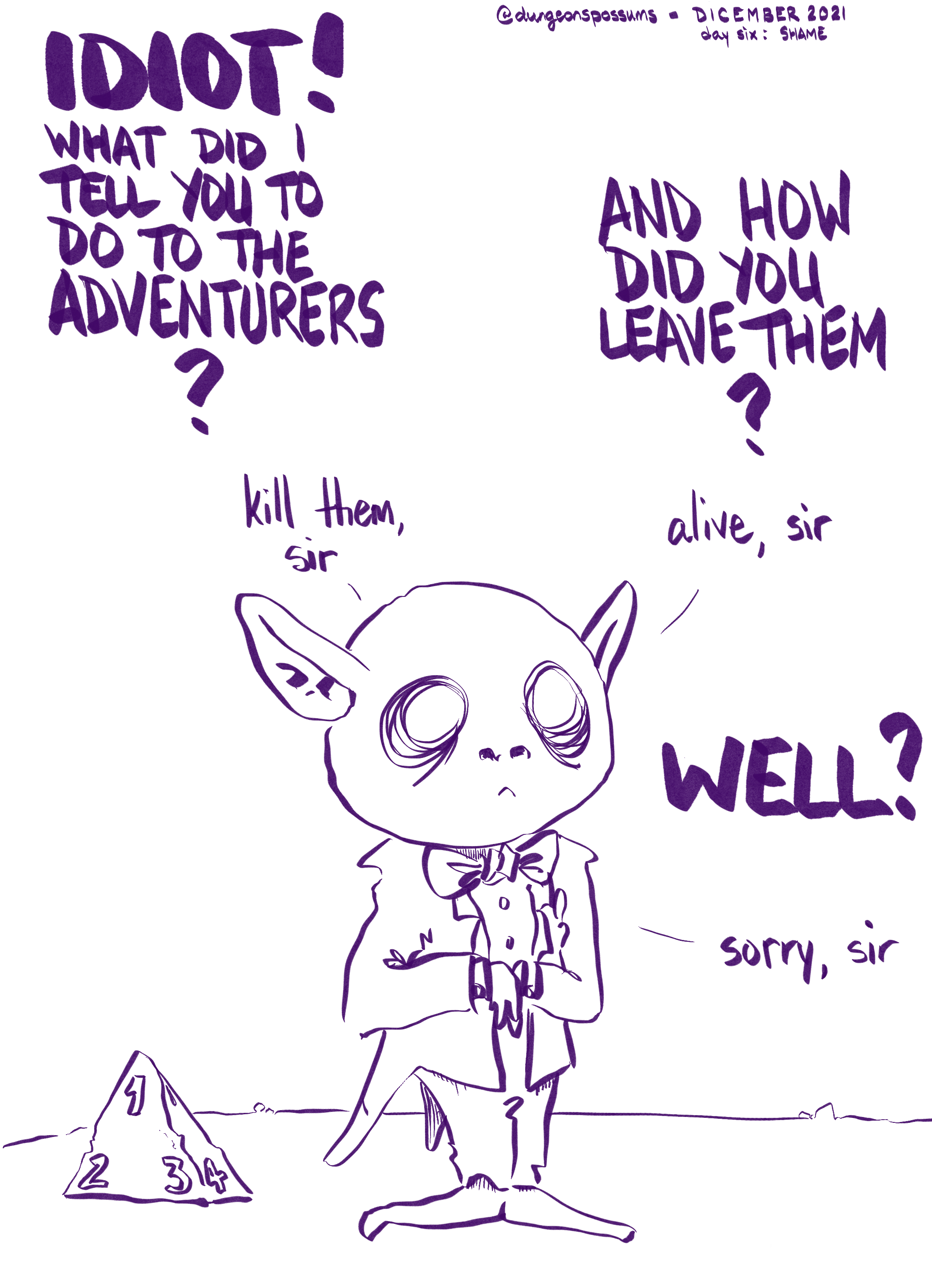 Back again with another batch. This one is a little bit different from the last go-round, though: whereas with 2-5 I mostly just collected my Dicember posts from my social media pages, this time around, I sort of also get to expand upon those posts. But, there’s time for discussing that later. There’s a lot to get to, so let’s get to it.

Not much to this one. It’s a little servant goblin being soundly shamed by the evil overlord. I promise, I’ll make up for this shortly.

Behold the dread martinet Bazguroth, scourge of man, whose whispered plots topple empires, whose lies caused Ashurnasirpal the Second to flay ten thousand serfs for imagined rebellion. Bazguroth, wrapped in a hellish, sulfurous haze of green and yellow smoke as if ablaze, dragging with it the teeth of demons and heads of men in a clatter of violence that threatens to drown the night screams of wolves and worse. Bazguroth, from whom imps and goats and all manner of base and impure creatures suckle soured milk stolen from the bosoms of starving mothers. Behold Bazguroth, the lash of souls, the thief of lives, the 956th in line to the throne of Hell, who would be crowned.

Bazguroth is a bestial servant of whatever abyssal monstrosity controls capital-H Hell in your setting, though it is far from subservient. It plots against its masters, as all demons do, and it strives to usurp greater power in the horrific plane it calls home. To do so, it will make bargains, backstab, mislead, curse, beguile, and otherwise position mortal pawns to pave a path to the thrones of hell.

Bazguroth can offer borderline-illusory, always-Monkey’s-Paw boons, fleeting though they may be. It will do so for reasons that may not be immediately clear but which always serve its ultimate designs. These boons have drawbacks and trade-offs, often worse than the benefit, but desperation makes strange bedfellows of men and demons. Temporary immunity to disease, for example, which is replaced eventually with greater susceptibility to same. Or perhaps immunity to fire but extreme weakness to cold. Or great strength, followed by a permanent loss of STR. Durations are determined by negotiation and Bazguroth’s ambitions; perhaps an adventurer can demand immunity to flame for one week and get it – if the immunity would improve the odds the adventurer will successfully slay a rival demon.

Okay, here’s where things start to get really complex. I drew a present, right? A d12 wrapped up and decorated for Christmas morning. Easy.

I thought about it, and it really seemed like it’d be a cool meta-goof to actually gift people a present!

Read on, I guess.

Night time is a terrific time in tabletop games and out of it. I’m a night owl of necessity, owing to terrible insomnia most of my life; nonetheless, I still think it’s incredibly beautiful and many of my best memories took place at night. In D&D, it’s usually scary, threatening, magical. All the hallmarks of a great scene – just add water!

Each day at dawn, this skull’s facets erase the engraved numerals, as if the bone forgot their shapes entirely. In an instant they have shuffled position, and a new number faintly glows a pale neon shade on the forehead of this skeletal artifact.

Legend says it was once the skull of a promising sorcerer, the protege of a cruel wizard-king whose malevolent temper rewarded failure with grave consequences dreamt of in hellish visions sent from afar across the astral sea.

This artifact now serves as a magical wand of sorts. It has one charge, refreshed each day, of a random spell decided by chance at dawn when the facets shuffle. Mechanically, it abides by any and all rules and limitations of wands in your preferred system.

Use your favorite 20 spells as the roll table for its daily charge.

If you’re feeling especially froggy, you can have multiple lists of twenty spells each, color-coded, so the color of the glowing number on the skull’s forehead takes on specific meaning. This would allow you to nest lists; like having a red list, a blue list, a green list, and a yellow list would allow you to roll 1d4 to determine a color/list and then 1d20 to select the spell. In this fashion you could select from a pool of eighty spells.

This one really got away from me, y’all. Like, I’m gonna level with you here: I straight up lost two nights screwing around in Procreate, Photoshop, and Affinity Publisher. I figured it’d shake the rust off a bit. I was wrong. I did everything incorrectly and learned nothing. The mockup is a lie because this isn’t even actually in a useful aspect ratio; I did the entire damn thing in squares. Everything about this is a mistake.

It’s a gift. A present, if you will. Told you we’d get around to the free stuff!

Finally! A simple and completely free adventure full of:

The Forest is a brief scenario set in a city teeming with half-dragonborn/half-tiefling monks a forest, obviously. A haunted forest, with ghosts and monsters and people and mysteries and simple puzzles. It’s not especially punishing, it’s not a death-trap. There’s basically no real traps at all, actually. It’s more melancholy than anything.

It’s a free 8-page PDF for B/X or whatever OSR system you prefer. Honestly, if you can keep a post-it with like four stat blocks handy for whatever game you like, this will work in it, because it’s extremely light. You can run this with essentially zero prep but reading it once will take you six minutes and make it super easy to do.

So anyway, here you go:

Spread the word; share this article around and let your friends in on it. I like seeing the stat counter go up on the WordPress backend. I wish I were kidding.

Sincerely, though, I really hope somebody gets some fun out of it! If you use The Forest, tell me about it; I would absolutely love to know. Feedback, suggestions, corrections, screamed insults, play reports – I’d be overjoyed if you hit me up in the comments or got at me over on Twitter @dungeonspossums and told me everything on your mind.

Thanks for following along so far this Dicember; I hope you’ll come back for more soon!