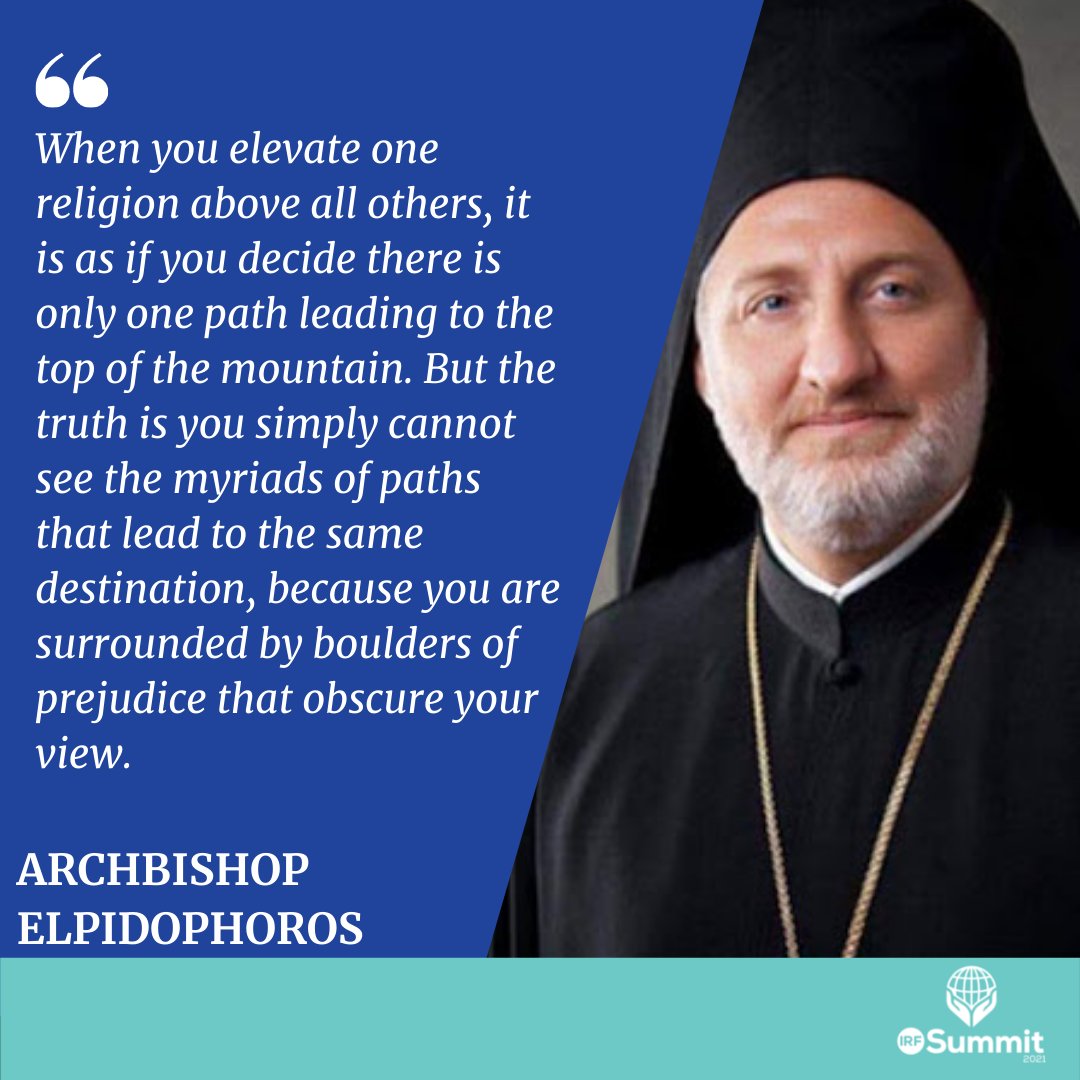 Did Archbishop Elpidophoros Espouse Heresy at the Religious Freedom Summit?

Archbishop Elpidophoros spoke on July 15th at the 2021 International Religious Freedom Summit in Washington on the topic, “The Rising Tide of Religious Nationalism.” The speech, and the press about it, have already caused quite a stir. Full text of the speech is here. Below is the Tweet about it from the IRF official account:

Archbishop @Elpidophoros addresses the #IRFSummit about the dangers of “religious nationalism” and “nationalistic religion”, emphasizing the importance of cooperative efforts to instill democracy and freedom of conscience around the globe.

Archbishop Elpidophoros is part of the Patriarchate of Constantinople, which is based in Turkey. Turkey, a nation with a long history of Christian persecution and genocide, has seen a rising tide of Islamic “religious nationalism” in this century.  Given that context, we can easily understand the Archbishop’s participation in this summit and his choice of topic to address.

The summit included a pastor who spent two years in a Turkish jail for his faith. Armenian Orthodox Archbishop Aykazian spoke about the dangers his nation faces from Muslim neighbors: “The safety and integrity of more than a thousand years of Armenian Christian culture are hanging by the slimmest of threads. We need to make the plight of Christian communities visible and concrete in the eyes of the world.” There was even a side event on the enforcement of blasphemy laws in mostly Muslim nations. For Orthodox Christians, this is an area of utmost concern as many of our brethren suffer under Islamic rule.

There is no inherent reason why the participation of Archbishop Elpidophoros in this summit should be controversial. Given the subject of the summit, the attendees, and the circumstances of the Patriarchate of Constantinople in Turkey – we would have been surprised had the Archbishop not been a prominent attendee. Unfortunately, the content of his speech took a very controversial turn. The image below was Tweeted from the official account of the summit.

The quote looks very bad, and has already caused a firestorm on social media. It is very easy to read the Archbishop’s statement as a denial of the uniqueness of the Orthodox Christian Faith and an embrace of the heresy of “many paths to God.” More than a few Orthodox Christians have posted the picture along with Bible verses such as John 14:6 – Jesus answered, “I am the way and the truth and the life. No one comes to the Father except through Me.”

This quote does not exist in a vacuum. Rather, it appears to be only the latest example of the Greek Archdiocese’s lack of fidelity to the Orthodox Faith. The recent ecumenical efforts of the Patriarchate of Constantinople have been interpreted as a willingness to compromise with the world. The history of syncretistic Freemasonry (both in Constantinople and the Greek Church) makes people suspicious of anything that can be read as equating all religions.

It also doesn’t help calm fears that the Patriarch of Constantinople has a close relationship to Pope Francis, and often appears with him. Pope Francis has caused controversy by, among other things, signing a joint statement with the head of Egypt’s al-Azhar Mosque that proclaims “diversity of religions” is “willed by God.” For the Pope’s trip to Morocco, the Vatican released an image that combined the cross with the crescent. Critics have branded the Pope’s efforts at Christian-Muslim dialog as an attempt to forge a new religion known as “Chrislam.”

Let us also not forget the whole “Pachamama” fiasco in the Vatican.

It is further troubling that on topics ranging from Covid to migration to Climate Change, opinions from those in and around the Ecumenical Patriarchate sound like endorsements of the New World Order / Great Reset. The close association with progressive academics, particularly those at Fordham, is also alarming. These academics want to fundamentally transform the Orthodox Faith, while simultaneously pretending they don’t.

So should this latest statement be understood as a rejection of Orthodoxy? Maybe. But something else entirely could be going on here. This could be an example of institutional survival becoming the mission, rather than spreading the Orthodox Christian Faith. The Patriarchate of Constantinople has almost no domestic flock left in Turkey. The Government of Turkey could easily dispose of the Patriarchate if it chooses to.

Archbishop Elpidophoros is likely the next Patriarch. He is absolutely committed to the Patriarchate’s survival in Turkey, as is Bartholomew, the current Patriarch. Everything they do, every word they utter, every alliance they enter – all of it is with the goal of preserving the Patriarchate. Which is why we believe that the Archbishop’s words at the summit should be interpreted in a Turkish context and not an American one. Given the situation in Turkey, and the summit’s goal of protecting religious freedom, the words of the Archbishop are most likely intended as an indictment of political Islam and not a rejection of Orthodoxy.

Especially since the paragraph right above the infamous comment is all about the theocracy in Iran.

On the other hand, we could look at some aspects of modern Iran, and find a distinct brand of “Religious Nationalism,” a full-blown attempt at theocracy by a seeming majority. But to see a spiritual basis for the State is to create a stratification of society along religious lines, a spiritual apartheid, if you will. The result is a monolithic society unyielding to diversity.

Is that part of the speech really about Iran, or is Iran used as a stand-in for the increasingly Islamicized government of Turkey? Either way, it seems that this very poorly worded paragraph was aimed mostly at Islam. A fact that might have been clear to those with a Near Eastern context.

Unfortunately, the Archbishop governs an Orthodox Church in the United States and made his remarks at a summit in Washington. In an American context, his words are seen as straight-up heresy. A fact that he probably did not even notice, given his fixation on Turkey. No one advising him appears to have noticed either. Or perhaps some did, but the statement being open to interpretation as equating all religions nicely fit their anti-Orthodox agenda. So they didn’t stop the train wreck when they could have.

In any case, Orthodoxy did not need this new controversy. The single-minded focus on the survival of the Patriarchate was already wreaking enough havoc. To curry favor with the American National Security establishment, and to gain a larger flock, the EP inserted itself into the ongoing conflict in Ukraine. This has led to immeasurable suffering among the Orthodox Faithful in that benighted country, while sowing divisions among Orthodox around the world. The situation is further complicated by the global popularity of Metropolitan Onuphry of Kiev and All Ukraine. The Metropolitan is among the most admired Orthodox hierarchs in the world, and also among the most persecuted. His personal following ensures that the Ukrainian situation will not fade from the headlines any time soon.

In his speech, the Archbishop made some awful comments about the situation in Ukraine. Not to mention that he totally ignored the persecution of the canonical Church by the government in Kiev. At a summit dedicated to religious freedom. Go figure.

To gain allies and influence, the Patriarchate has been at the forefront of deeply controversial ecumenical engagements. To curry favor with global elites, the Patriarchate endorses progressive policy positions on practically every issue imaginable, and seems to signal LGBTQ+ friendliness at every opportunity. This leftist political and social engagement alienates many Orthodox Christians, whose pleas for moderation seem to fall on deaf ears.

All of this harms Orthodox witness in the United States. Greek Archdiocese priests, many of whom are very effective evangelists, complain that the Archbishop’s words and actions make their jobs harder. The situation isn’t doing anyone else any favors, either. Not only is the Greek Archdiocese the biggest jurisdiction in the United States, it is also the most visible. For us Orthodox Faithful, it is hard to know where the survival strategy ends and genuine heresy begins. The word “byzantine” comes to mind when sorting through all this.

In the end, there is probably no real difference in the impact of perceived heresy versus actual heresy.

While the Archbishop’s comments at the summit may not have been intentional heresy, they are at minimum a massive blunder that should have been avoided. Just one of many recent ones, unfortunately. Orthodox Christians in the United States deserve better than this. We deserve hierarchs whose focus is on the Orthodox Christian communities in this country. We may have that in some jurisdictions, but it is clear that the focus of the leadership of the Greek Archdiocese is not even on this continent.

Nicholas – member of the Western Rite Vicariate, a part of the Antiochian Orthodox Christian Archdiocese in America

Did Archbishop Elpidophoros Espouse Heresy at the Religious Freedom Summit?