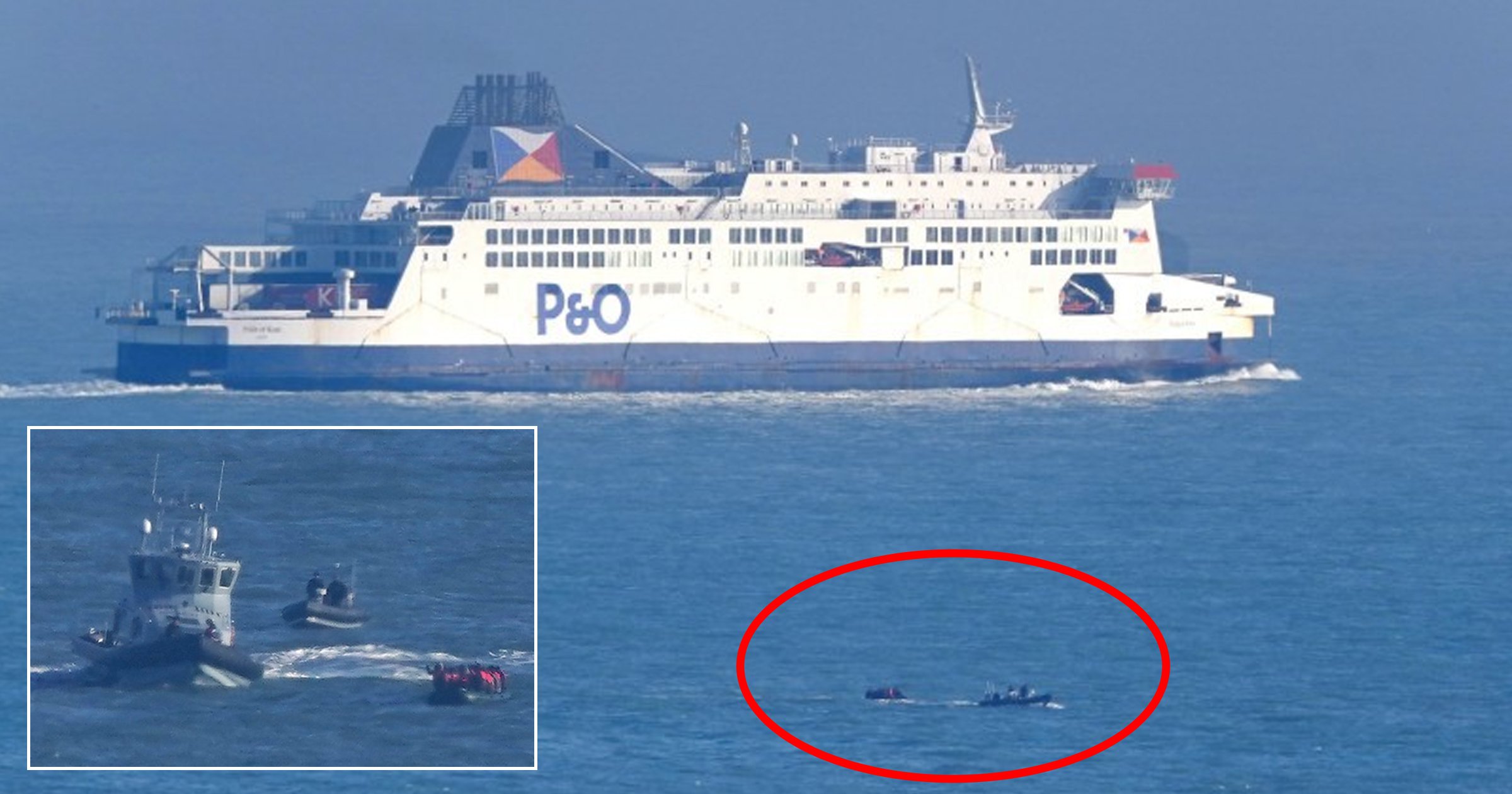 A small boat with dozens of people on board including children came dangerously close to a P&O ferry while crossing the English Channel today.

Roughly 30 passengers were picked up and brought to shore on Border Force vessels this morning as two dinghies made it to Dover.

People are still willing to take the extremely risky journey from mainland Europe in overcrowded vessels across freezing cold water.

More than three times as many people have made the perilous crossing to Britain so far this month than the whole of January last year.

Authorities have managed to intercept more than 800 people trying to get into the country so far this year.

Priti Patel has been warned by officials than 65,000 people could make the crossing this year – more than double last year’s 28,300 record.

Yesterday the Home Secretary confirmed she has asked the Ministry of Defence (MoD) to get the Royal Navy in charge of policing boats trying to cross the Channel.

The move signed off by Boris Johnson would see the Navy taking over the operation from Border Force by the end of the month.

Military surveillance drones could be used to monitor the area for dinghies, but military personnel are not expected to carry out a policy of pushing boats back towards France.

Fearing such a move could result in more Channel deaths, a Navy source told the Guardian: ‘I’m not sure pushback would work; it’s not part of our ethics.’

The move is one of a series of populist policies under ‘Operation Red Meat’ – a part of ‘Operation Save Big Dog’.

Boris Johnson continues to face calls to resign over claims of parties and regular drinking sessions were held in Downing Street during lockdown.

His allies are fighting to keep him in office and hope rolling out some ‘red meat’ populist policies will keep angry backbenchers on side.

But military sources and some Tory MPs appear to be at odds with the Government, suggesting that ‘pushback’ tactics would be illegal as well as more dangerous.

Chair of the Commons Defence Committee Tobias Ellwood said: ‘This tactic may, on the face of it, look popular, with 28,000 migrants now crossing every year, send in the navy to sort it out. But it is not the strategy that will solve the movement of migrants.

‘There is a real danger of mission creep here, with further naval assets being sucked into this challenge.’

Meanwhile Conservative former minister Sir Edward Leigh branded plans to use the Navy as a ‘taxi service’ to escort migrants to the UK an ‘embarrassment’.

Labour’s shadow defence secretary John Healey claimed the Government is ‘desperate to distract attention from accusations about the Prime Minister lying and partying in Downing Street’ and ‘desperate to prop up a Home Secretary utterly failing’.

SNP MP Dave Doogan branded the announcement ‘military camouflage being used to disguise a political crisis at the heart of Government’.

Addressing MPs today, Defence Minister James Heappey said: ‘The Government has been exploring every avenue to prevent further crossings and has now appointed defence to take operational primacy for cross-Channel counter-migration operations, which will see a much larger and more visible role for the Royal Navy with regards to operational planning, asset co-ordination and operational delivery.

‘Throughout the last 12 months, defence has provided a range of support including the provision of surveillance aircraft, additional accommodation, planning expertise and assisted in the delivery of trials for novel tactics to assist the Border Force and Home Office.’

He added: ‘Detail of how defence will deliver and maintain primacy of cross-Channel counter migration operations going forward is currently being worked through.

‘The Government’s objective is that nobody should arrive illegally in the UK on their own terms, thus all vessels transporting illegal migrants across the Channel must be intercepted before or as they land.’

However, Sir Edward told MPs: ‘In the absence of ministers having the political will to use pushback, what is the point in appointing a Royal Naval admiral to help Border Force to be a more efficient taxi service so that the migrants will know that now “we have got the Royal Navy going to pick us up and we will be taken safety to the UK, and we will be put in a hotel and we will never ever be sent home”?

‘This is just an embarrassment. Will the minister now co-ordinate with his colleagues to do what we have been suggesting for months now and that we get rid of the pull factors, namely we reform any piece of legislation that is necessary, including the Human Rights Act, and people who do this illegal crossing are arrested, put in a prison, and then deported?’

A military source told The Times: ‘This isn’t about bumping small boats and turning them round – that will never work. You can’t do that in the Channel, it’s too narrow.’

He said: ‘I don’t think it makes any difference really to the problem of more coming across, because if I was a people trafficker, I would say to them all, “Get in your little boat and go out there, the Royal Navy is now in control of all of the shipping that is looking out for you. You will be picked up and then you will be pretty well on your way”.’

Ministers also said to be drawing up plans which would see asylum seekers flown to Ghana and Rwanda in a bid to deter Channel crossings.

The proposals would see the UK pay another country to take on the responsibility – but no other nation has yet agreed to do so.

A Whitehall source told The Telegraph that the warning of 65,000 people crossing the Channel this year is ‘not an estimate or a forecast’, but a ‘planning assumption’.

They added: ‘In part, it demonstrates exactly why we are taking the measures that we are and looking at things like offshoring (the processing of Channel migrants) and outsourcing (operations in the Channel to the military).’

In November last year it was reported that Albania was being considered as a potential destination to send migrants for offshore processing.

But the Balkan state furious denied being in talks with the UK, with an ambassador saying such as scheme would be ‘against international law’ and ‘totally contrary’ to his country’s position.

Downing Street would not be drawn on these plans, with the PM’s official spokesman saying it was ‘not helpful’ to discuss negotiations with other nations, MailOnline reports.

An MoD spokesman said: ‘Unacceptable numbers of people continue to make the dangerous Channel crossings and last November’s tragic deaths serve as the strongest reminder of the need to stop them.

‘The Government is exploring every avenue to prevent further crossings and details of how that can be achieved will be made known in due course.’

The Home Office added: ‘The UK armed forces already work closely with Border Force in these operations, providing expertise and assets as part of our processes in the Channel. It is right that we pursue all options to prevent illegal crossings and protect life at sea.’