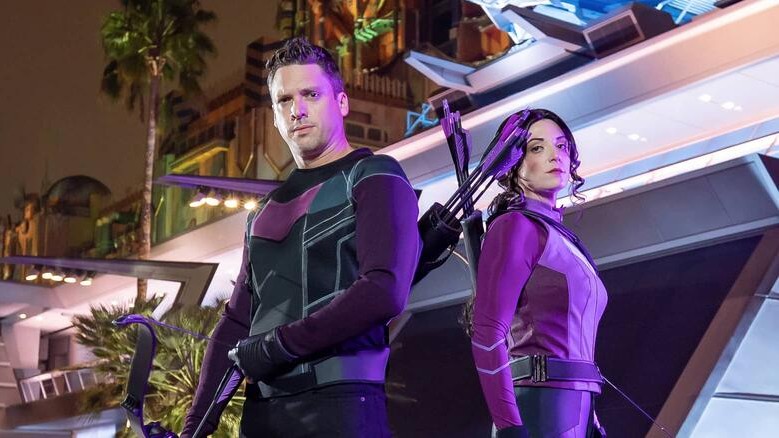 The new “Avengers Assemble” holiday stunt show typically plays half a dozen times a day in Avengers Campus at Disney California Adventure between 11 a.m. and 5 p.m.

Sign up for our Park Life newsletter and find out what’s new and interesting every week at Southern California’s theme parks. Subscribe here.

Bishop takes over the Hawkeye mantle from Barton in the Marvel comics. Viewers will have to wait and see if the same story arc unfolds for Barton (played by Jeremy Renner) and Bishop (played by Hailee Steinfeld) on the new Disney+ series.

During the new “Avengers Assemble” holiday stunt show, Barton peppers the fight sequences with a string of lame jokes about getting his Jingle Bell rung and making the naughty list.

“How about your Christmas gift to me is no more bad puns,” Bishop says during the show.

Barton dons a Santa Claus hat on the balcony of the Avengers Headquarters in the Marvel themed land during the choreographed fight sequences against the Tracksuit Mafia — a group of Russian gangsters who run a New York City crime ring.

Bishop comes to the rescue just as the Tracksuit Mafia is preparing to throw Barton off the Avengers Headquarters balcony just below the Quinjet docked on the roof.

An arrow fired at a control panel by Bishop initiates a holiday music playlist that includes “Jingle Bells,” “We Wish You a Merry Christmas,” “Hallelujah,” “Russian Dance” from the “Nutcracker” ballet and “Auld Lang Syne” — which serve as the soundtrack for the fight sequences.

The action-packed fight scenes find the heroes and villains engaged in hand-to-hand combat using oversize candy canes with the bad guys ultimately subdued with strands of garland and lassoed with super-sized Christmas wreaths. A plastic snowman lawn decoration and a big present wrapped in a bow even play a role in the playful fight scenes filled with as many laughs and guffaws as punches and kicks.

The 5-minute show ends with a Christmas card group photo with Shang-Chi, Captain America, Captain Marvel and Thor after the Hawkeye superheroes are done “decorating” Avengers Headquarters for the holidays.

“We might have ruined the campus Christmas party,” Bishop says at the end of the show.

“This is usually how our holiday parties end up,” Captain America replies.