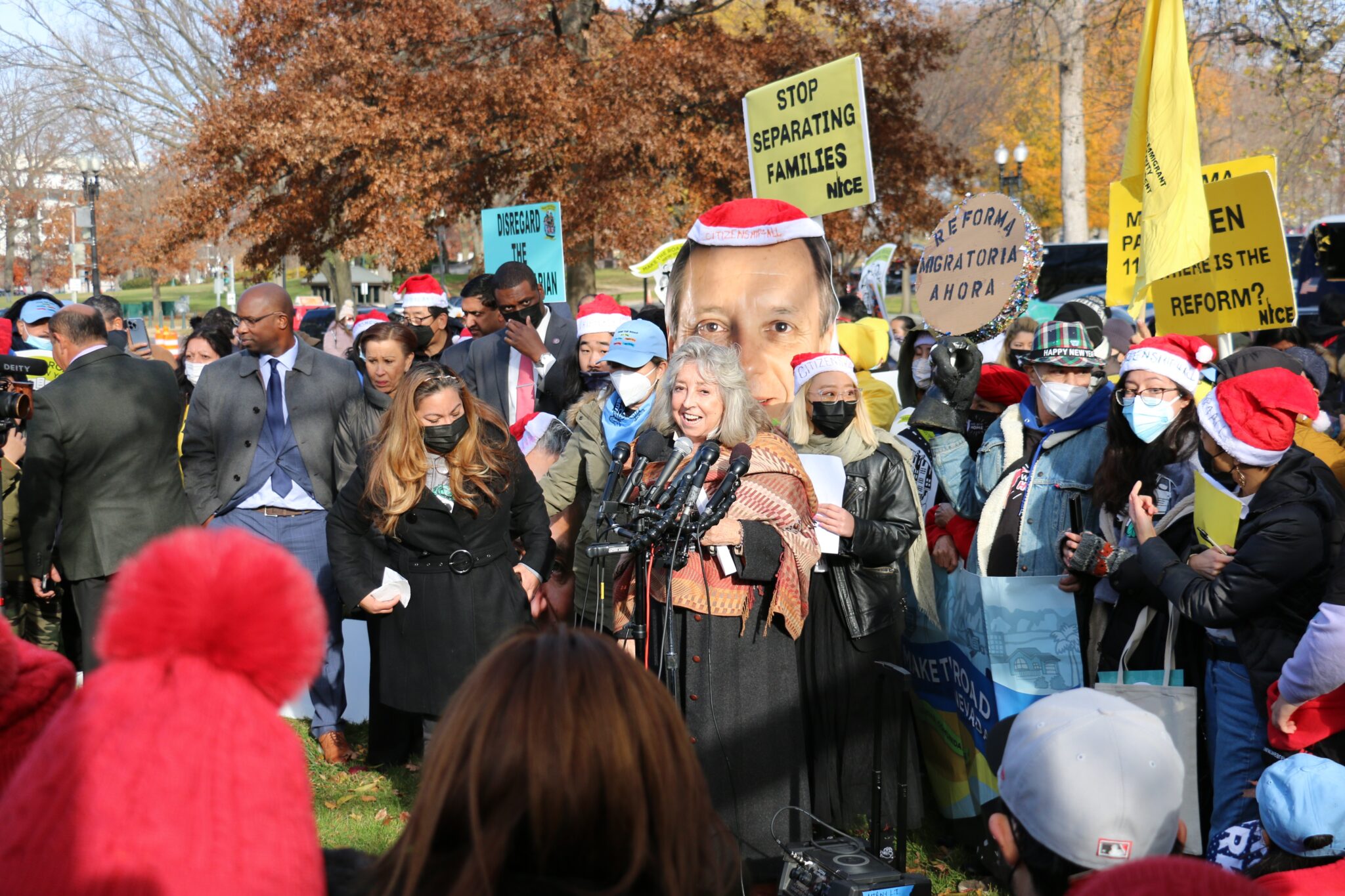 Divided Congress holding back pathway to citizenship for 130,000 in Nevada, study says 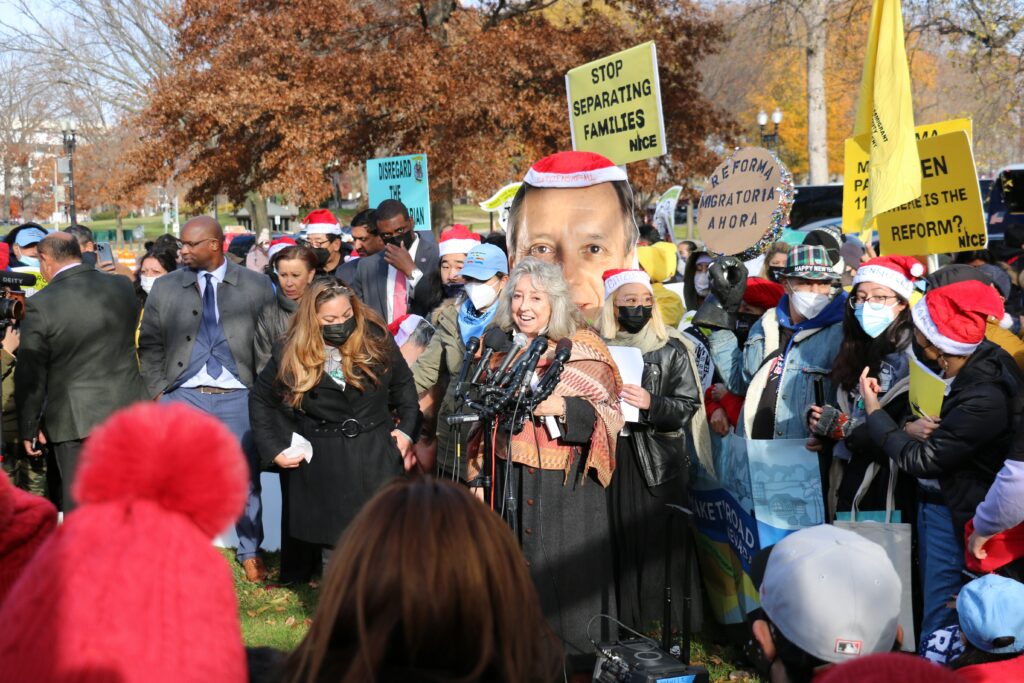 Under pending bills in Congress four out of five undocumented immigrants in Southern Nevada would be eligible for permanent U.S. residency, but a divided Senate is holding them back.

A study released Thursday by the Center for Migration Studies of New York shows in-depth estimates and characteristics of the immigrant populations that would get a pathway to citizenship in the U.S. if any of several immigration reform bills moving through Congress became law.

Researchers estimated that Southern Nevada is home to nearly 152,000 undocumented citizens, according to the study, which is based on detailed data collected in the 2019 American Community Survey by the Census Bureau.

About 130,000 undocumented immigrants in Southern Nevada would be eligible for permanent residence under three pending bills: the American Dream and Promise Act of 2021, the Citizenship for Essential Workers Act, and the US Citizenship Act of 2021.

Southern Nevada was in the top 13 metro areas with the most undocumented immigrants that would be eligible for citizenship under those three bills, according to the study.

The majority of undocumented immigrants in Nevada, 67%, would be eligible for citizenship under the Citizenship for Essential Workers Act, meaning about 101,100 Nevadans in Southern Nevada could become permanent legal residents if the bill passed as currently written.

Another 24,900 undocumented immigrants in Southern Nevada would be eligible for citizenship under the American Dream and Promise Act of 2021. That’s about 16% of the total estimated undocumented population in the state.

An additional 4,000 undocumented immigrants in Nevada would be eligible for permanent residence under the US Citizenship Act of 2021, making up about 3% of the undocumented population in the state.

The report also offers estimates of the undocumented population by characteristics – such as length of time in the country, English language proficiency, education, household income, health insurance, and homeownership.

Researchers call the study the “first attempt to provide a detailed statistical profile” of immigrants who would benefit from major U.S. legalization programs.

The undocumented population in the U.S. remains large at about 10 million in 2019, but has fallen by about 1.4 million since 2010, driven largely by a 28% decrease in Mexican immigrants and large scale return migration to Mexico, according to the study.

“Many more undocumented immigrants are returning to Mexico than are arriving every year,” said Robert Warren, a senior visiting fellow at the Center for Migration Studies of New York.

Most of the estimated 6 million undocumented immigrants living in the U.S. have strong family and socio-economic ties to their community: 37% live in homes with mortgages, 3.4 million arrived at age 17 or younger and 3.3 million live in households with US citizens, including 2.9 million US citizen children.

Additionally, most undocumented immigrants who arrived in the U.S. as children have excelled in the United States.  Nearly all childhood arrivals have graduated from high school and about 42% have attended college. About 86% of the 2.2 million childhood arrivals speak English well, very well, or only English.

Most undocumented immigrants in the labor force, a stunning 96%, are employed, and about 33% have attended some amount of college.

Still, large numbers of undocumented residents in the U.S. are low-income, working-class persons: 20% live at or below the poverty threshold, 50% lack health insurance, 40% have less than a high school diploma, and 14% do not speak English.

“When you don’t have legal status, a lot of people don’t work in the jobs they’re qualified for. Becoming a citizen helps them reach their full potential,” Warren said.

Citizenship is the only sure way for undocumented immigrants to advance economically, argue immigration advocates.

“You give status to one person but that status and that new ability to advance supports their children and supports the communities they live in. It’s a ripple effect of benefit and that’s why I truly believe that immigration has to be a part of any Build Back Better agenda,” said Angelica Salas, executive director of the Coalition for Humane Immigrant Rights of Los Angeles.

In Nevada’s service industry-heavy workforce, undocumented immigrants have long played an outsize role in holding up the economy, and that has been especially true during the pandemic.

Nationally, nearly three in four undocumented workers, an estimated 5 million in total, have served the country as essential workers on the front lines in the fight against COVID, according to a recent study by pro-immigration reform group FWD.US.

In Nevada, immigrant advocates and U.S. House Democrats have consistently called on Senate Democrats to enact a pathway to citizenship, leading to tensions with elected officials.

Earlier this week Nevada Rep. Dina Titus was one of a dozen House Democrats who joined immigrant rights organizations gathered in Washington D.C. to call on the Senate to include a pathway to citizenship in the Build Back Better Act.

The latest version of the Biden administration’s social spending bill as passed in the House, however, doesn’t include a pathway to citizenship for immigrants, instead offering a temporary parole option that falls short of what many advocates want.

If passed as currently written, the bill would grant a minimum of a five-year parole, with an option of an additional five years to qualifying immigrants who submit an application and pay a fee.

Due to gridlock in the Senate the temporary parole option would need to pass using the budget reconciliation process, a Senate procedure allowing legislation to pass with a simple majority instead of the 60 votes required to overcome a Republican filibuster.

“The Republican decision, especially in the Senate, to continue to support xenophobia has forced the movement to look for a different path forward and the only path for protection now is the budget reconciliation process,” Salas said.

“We disagree. We have asked the Senate to disregard her advice on this issue,” Salas said. “Where we are today is we are awaiting the decision of the Senate Parliamentarian as to this new program. We are going to hear notice of this any day now.”

Salas noted that providing a pathway to citizenship for Dreamers, Temporary Protected Status-eligible individuals, farm workers and undocumented essential workers would boost the U.S. gross domestic product by a cumulative $1.5 trillion over 10 years and create more than 400,000 new jobs, according to a study by Center for American Progress and the University of California Davis’ Global Migration Center–a major budget impact.

“One data point I love is just how long our families have been here,” Salas said. “ They’re your neighbors, they play with your kids, they’ve grown up with your kids. All of these folks are so rooted in our communities. This is home.”

The post Divided Congress holding back pathway to citizenship for 130,000 in Nevada, study says appeared first on Nevada Current.

Divided Congress holding back pathway to citizenship for 130,000 in Nevada, study says