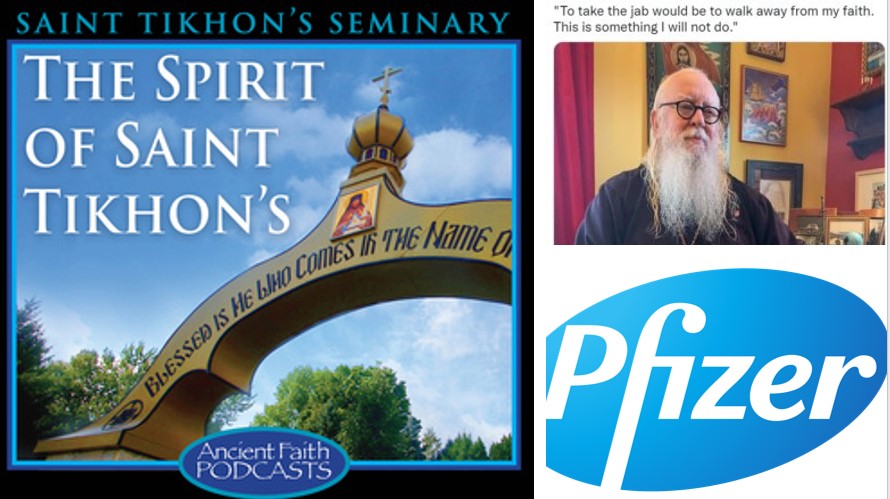 Does Ancient Faith Radio Have a Vaccine Conflict of Interest?

The letter below was sent by one of our contributors (name withheld by request) to Ancient Faith Radio. AFR has run, so far, two interviews between Fr. John Parker and Dr. Ryan Sampson Nash heavily promoting the COVID vaccines. It seemed a strange thing to do even once, since the “discussion” really amounted to Dr. Nash availing listeners of his opinions without any counter-balance from Fr. John or another guest. To do the same thing twice or more seems especially odd as there is no shortage of Orthodox physicians and medical researchers in the United States to provide additional commentary.

An Orthodox physician and an Orthodox Nurse in the pharmaceutical industry have both responded to the first podcast. We highly recommend reading both responses after listening to Part 1. In addition to strangely continuing to push one Orthodox MD’s opinions on the vaccines, Ancient Faith also severed its relationship with Abbot Tryphon mere days after he posted on Facebook (9/15) that taking “the jab” would mean walking away from his faith. Fr. Andrew Stephen Damick, the Chief Content Officer for Ancient Faith Ministries, notified Abbot Tryphon via email shortly after the FB post that his blog was no longer welcome.

One of the most popular Orthodox clerics in America rejects the mRNA vaccines, and then his blog is shut down within days for being “too political” for AFR. The relationship between the Abbot and Ancient Faith appears to have been strained for some time, were the vaccine comments merely the last straw? Even before we received the information in the letter below, the timing of the move by AFR seemed strangely coincidental. Now we know that Ancient Faith has a potentially serious, and previously undisclosed, vaccine conflict of interest.

Hard questions must be asked in light of that fact.

RE: The Spirit of Saint Tikhon’s “Covid and the Vaccines” podcasts

Christ is in our midst!

I see that St. Tikhon’s has scheduled Round Three with Parker and Nash on Oct. 14. Actually, from the flier, it appears Dr. Nash will lecture, without Fr. John’s podcast repartee. I’m sure AFR will dutifully broadcast the result, regardless.

But I’m wondering, who on Earth needs to hear from the same speakers for a third time on this topic? Are these the only Orthodox views to be aired? Have I missed the alternative? Because, I don’t think a real discussion has taken place among the Orthodox about the COVID investigational shots.

Is AFR not airing other views, because Parker and Nash possess unimpeachable credibility? To use Fr. John’s “fun fact” turn of phrase, here is a fun fact Parker and Nash missed: The FDA violated federal law, pulled a classic bait-and-switch, and actually approved Pfizer’s Comirnaty shots, which are not available in America. See Children’s Health Defense’s lawsuit.

Is AFR not airing other views, because one of your trustees, Mr. Mark Yniguez, is a former 19-year employee of Pfizer? His LinkedIn page says so.

In AFR World, is this an undisclosed conflict of interest?

Is AFR not airing other views, because many bishops and clergy favor the shots; and, therefore, a supposed consensus has been reached? I have news for you: No consensus is in sight, and neither is a “return to normal,” no matter how hard you’re wishing for it, or how many injections or drugs the war-profiteering pharmaceutical giants deploy.

The note on the flier announcing St. Tikhon’s upcoming lecture betrays an impatient, hectoring tone. “This matter, unfortunately, is not dying a quick death,” it reads. Let’s just say, I’m rooting for the seminarians and others who are pushing back against Parker’s and Nash’s re-education camp lectures.

Is St. Tikhon’s and AFR’s goal to kill dissent, or to have a robust discussion on the important topics of bodily autonomy and experimental injections?

For the Robust Discussion Option, I suggest you beseech the affable Dr. Peter McCullough of Texas to grace your podcasts, posthaste. Dr. Nash mentioned Dr. McCullough in passing and only in relation to the drug Ivermectin, in his Round Two Parker-Nash podcast.

But McCullough has many fun facts to share. For starters, he says that a former president of the American Medical Association recently told him: “We have the largest biological product catastrophe in human history going on right now. … And no one knows how to stop it.” See time-stamp 01:40:38 on this video.

Perhaps McCullough isn’t referring to the abominable, longstanding pseudo-medical practice of using fetal cells. Why don’t you find out what he means, instead of dismissing those who will not toe your line?

The post Does Ancient Faith Radio Have a Vaccine Conflict of Interest? appeared first on Orthodox Reflections.

Does Ancient Faith Radio Have a Vaccine Conflict of Interest?