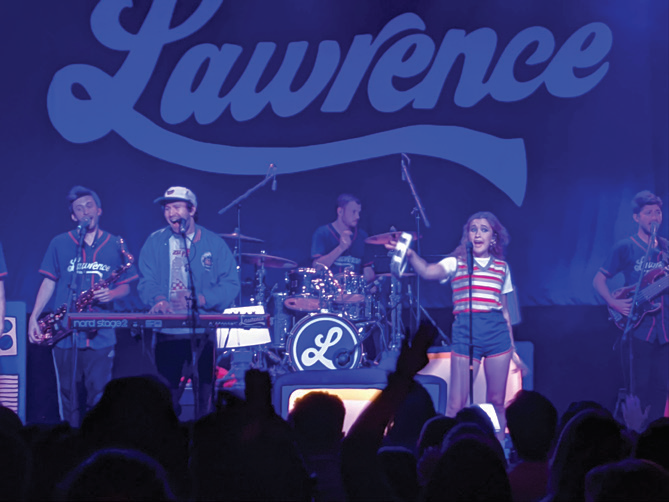 Doing Their Thing: A Unique Inclusive Approach For Lawrence, A Band On The Rise

“I’m telling you, it won’t be very interesting, I don’t do anything – they’re just good on their own.” This is the response I receive from audio engineer Leo Pisaq when I reach out to him to talk about his work mixing front of house for the band Lawrence, an 8-piece band led by brother-sister duo Clyde and Gracie Lawrence (no relation to yours truly).

The group has been turning heads with their infectious funk- and gospel-infused “soul-pop” stylings, tight arrangements, and top-tier musicianship, steered by an authentic and approachable vibe that manages not to take itself too seriously.

After becoming familiar with the band’s music and watching footage of their live performances, I reacted in the time-honored tradition of many sound engineers before me: “I have to find out what they’re doing.”

So, on a cold, wet late evening in late October, I am heading to the Wescott Theater in Syracuse, NY to meet up with Leo, scope out the audio arrangements, and watch the band do their thing. When I show up at the venue, everyone is bundled up in multiple layers, trying to keep warm as they prepare for the show in the cold venue.

Leo and Jordan Cohen, the band’s saxophonist and tour manager, are at FOH tinkering with an experimental setup that will allow fans to stream stems from the mixing console directly to their phones, don headphones, and mix their own version of the performance in real time. “Oh, great!” Cohen exclaims, seconds after being introduced to me. “I’m glad you’re here, you can help us test this!”

This approach is exemplified in the live sound mixing strategy. Before hiring Leo to mix FOH, the band carried a 32-channel QSC TouchMix to handle the mixes. In rare instances where the house audio crew prove to be less than cooperative, the band has been known to hand the controlling iPad to an audience member – something that Leo considers somewhat of a “safe bet” given how many of the band’s fans are musicians themselves, but still – a trusting move, to say the least.

“They do it all themselves,” Leo continues. “I walked in on an already-set-up [Allen & Heath] dLive – they said, ‘Here’s what we’re doing.’ They had it all figured out.”

Guitarist Jonny Koh talks me through the setup. “To call this the mixing desk is such a weird thing,” he says, gesturing to the tiny footprint that the dLive CTi1500 occupying on a folding table at FOH. “The ‘desk’ is really up there [on stage], right?” referring to the CDM48 [MixRack] that lives in the band’s on-stage rack along with RF receivers and transmitters.

“We’re splitting every input twice – well actually, some three times now with this new headphone thing we’re trying,” he continues. “So that way everyone in the band can have their own channel strip if they want it. If you wanted de-essers on a certain vocal, but everyone else didn’t care about it, we have the processing to do that.” The band can adjust the dedicated monitor channels in their own IEM mixes via tablets on stage.

“Our plan was to get the desk going, record our rehearsals with the Dante card, take a day in the studio running everything back through Dante virtual soundcheck and get the mix dialed in on our studio monitors, so that we could roll in with everything balanced the way we wanted to and basically just be tuning the PA every day.”

Koh adds that due to pandemic-related supply chain issues, the Dante card was a recent acquisition, so they’re still working on getting the mix fine tuned, although he credits the dLive console for giving them the sound they were seeking, even in progress. “It seems like, even before we had the mix dialed in, there was so much clarity in this board.”

A clever use of softkeys that fire scenes to change the surface’s fader layouts means that Leo can “flip over” the entire surface to address those monitor inputs if necessary – the band uses periods at the beginning of the input names to indicate the monitor side of the split for each input.

I ask him about the vocal mic choices – “They’re on [Shure] KSM9 now. Again, the band knows exactly what they’re doing. They did their own research – these are the mics, they sound good into these mics – there’s definitely thought behind it. It’s a KSM9 wired for Clyde and a wireless capsule for Gracie.” The stage is clean and quiet, with only drums and horns contributing to the SPL on stage – leading to a clean, tight mix out front. (“Mixing for fidelity,” Leo calls it.)

We head to the stage so he can show me the side-stage RF racks and the band’s pedal boards. “Show him the button!” a passing band member insists. “The button” is exactly what it sounds like. The 3D printed red button that plays back samples and tracks used throughout the show in various capacities ranging from simple “stingers” to full “sweetener” playback elements during songs, and even walk-out music, along with a pleasing display of colored LEDs.

I ask if it’s just a giant MIDI trigger. “No! It actually plays the audio,” he answers, pointing to a pair of XLR cables leaving the device. “The band designed it and had it custom manufactured.”

In the hours between check and doors, I’m treated to quick looks at other fascinating projects the band members are working on, such as Backline.me, a web-based collaborative tool for organizing and advancing live productions. Artists, management, and venues can upload stage plots, riders, venue tech packets, guest lists and so forth, with everything automatically getting distributed to the appropriate people.

And then there’s Splitter.fm, an in-browser stem-playback tool, laid out similarly to a DAW, that allows listeners to play back songs, mute and solo various elements of the mix, and even leave comments and questions at specific points.
I find myself wondering how the group has time for all these projects in addition to – oh yeah – being on a national tour. Besides co-leaders Clyde and Gracie Lawrence, the band’s roster includes Marc Langer on trumpet (“and headband”), Sumner Becker on alto saxophone, Cohen on tenor saxophone, guitarist Koh, drummer Sam Askin, and bassist Michael Karsh, not to mention their Ford E350, “Vandy Newman.”

Even in the relatively small touring market of Syracuse, the group managed to pack a crowd of more than 500 people into the theater, with many enthusiastic fans ranging in age from mid teens to late sixties, some of whom are dressed as band members or characters from Lawrence’s music videos.

For all of his humility, Leo’s mixing is impeccable and he delivers a punchy, well balanced, and consistent mix for the duration of the band’s 90 minute set. With so many musicians and audio engineers among their fans, a great-sounding show is of paramount importance and he’s the right person for the job.

Still, he maintains that he first and foremost gets to experience the show as a fan every night. “I get to watch the show from the best seat in the house,” he tells me, and this is evident as he bounces happily behind the console as he mixes. “The entertainment is not in the PA. The entertainment is on stage. If the PA goes down, Clyde will say ‘Who has a megaphone?’ and somebody is going to bring a megaphone from the car, and it’s going to be an unforgettable moment for everybody.”

Editor’s Note: Be sure to check out Leo Pisaq’s recent appearance on the Signal To Noise podcast here on ProSoundWeb.

The post Doing Their Thing: A Unique Inclusive Approach For Lawrence, A Band On The Rise appeared first on ProSoundWeb.

Doing Their Thing: A Unique Inclusive Approach For Lawrence, A Band On The Rise