It is apparently common for ADHDers to leave boxes and bags, full of miscellaneous items, all over the place.

I gasped when I saw this … as this is how my husband lives!

[2] For years, he has made excuses for these ‘Doom Boxes’, frequently insisting he will sort them. But of course, this doesn’t happen, and more doom boxes appear.

With every house move, my husband promises … it won’t happen this time. This time we have more space …

[3] He’s an intelligent man who, contrary to popular belief, prefers a tidy home.

Yet, we seem to be constantly battling the things he hoards and accumulates.

I knew there had to be more to it …

Apparently it is linked to executive dysfunction.

It has really helped me to understand that this is something commonly experienced by some Neurodivergent people.

Presumably, the “doom boxes” descriptor originated with exhaustion and overwhelm experienced by people with ADHD in maintaining their desired level of organization at home, work, or school. The existence of “doom boxes” (or bags) hinted at larger efforts to organize these environments, regularly stymied by the existence containers full of things that would seemingly never be properly stored — resulting in feelings of inadequacy and “doom” among people always striving to rid themselves of endless clutter.

Commenters largely concurred with the contents of the “doom boxes” meme, expressing that they felt “seen” or that they didn’t understand why they were unable to avoid creating boxes of miscellaneous items:

I feel personally attacked by this relatable content. Who has been looking around my house at all the random bags or boxes of random things that I will eventually get round to sorting out and clearing up after the other stuff I have to do on my list which is probably in a bag of stuff…

One commenter replied, asserting that “doom boxes” were associated with conditions other than ADHD (which was reflected in a 2016 paper, “Executive Dysfunctions: The Role in Attention Deficit Hyperactivity and Post-traumatic Stress Neuropsychiatric Disorders”):

It’s not just ADHD that causes this behaviour. It can also come from trauma, abandonment issues, OCD and such. I have this behaviour and it sucks so much. I’ve tried so hard to curb it for so long, but it seems impossible not to. Perhaps working with a professional and learning to keep just one “doom box” would be beneficial?

The Facebook post’s creator cited TikTok — a short-form video-sharing platform which hosted, among other content, brief videos in which a user describes a concept or opinion. The specific TikTok content was not linked.

Social media platforms are inherently less organized in terms of search parameters, so locating the exact starting point of the TikTok doom boxes discourse was difficult. TikTok videos were occasionally shared to YouTube, and we located one March 10 2021 TikTok video about doom boxes — but the user’s TikTok handle was cut off, and the video was clearly a response to an earlier video.

@ardantzmy whole room is a doombox… clean = an organized mess

Suffice to say, the “ADHD doom boxes” nomenclature appeared to originate on TikTok, but the precise origin point was unknown. Regarding the descriptor itself, we did a search for “doom boxes” going back two years, and all 37 results for “doom boxes” had nothing to do with ADHD or executive dysfunction.

One result was a March 11 2021 post to Reddit’s r/ufyh, a subreddit devoted to whipping a home or habitat into better shape. In the post, the original poster asked others what they called “random boxes of stuff,” and requested strategies for eliminating them:

What do you call the boxes of random stuff and how do you tackle them? from ufyh

A search for “‘doom boxes’ ADHD” without a date restriction similarly returned 17 results as of November 19 2021, indicating that the phrase was likely novel and primarily existed in video or image content created in 2021: 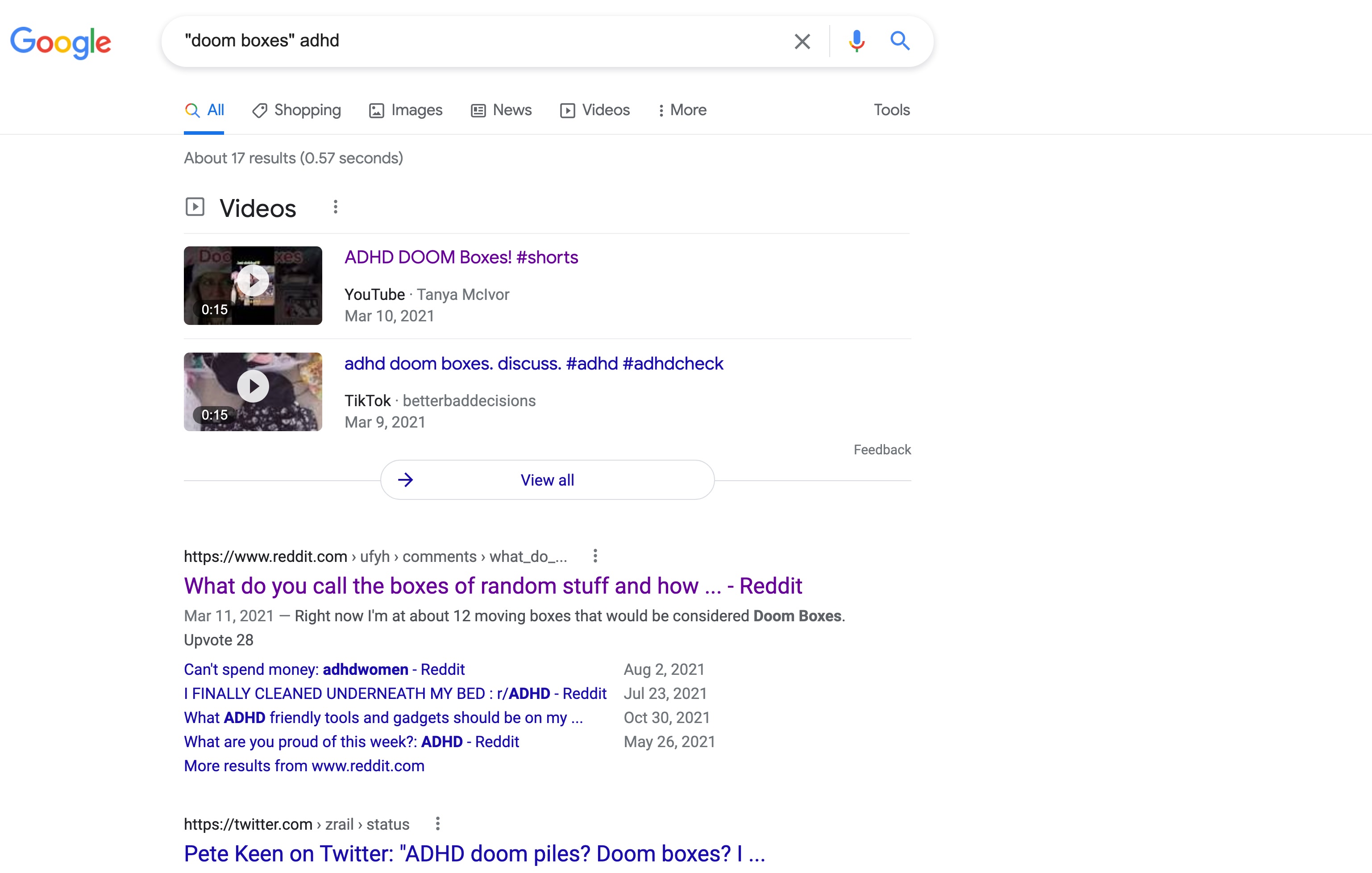 Replacing “ADHD” with “psychology” and not date-restricting the search returned no results on November 19 2021:

Among the results returned was a June 2021 interview on the website intomore.com, where the interviewee described struggling with “ADHD doom boxes”:

[Question] INTO: Awesome. So, you see self-care as a form of activism — what would you say are your top self-care tips or things that you can do to take care of yourself?

[Answer] … making your space more accessible for you, regardless of what other people would do. I have ADHD; there’s this concept called “ADHD doom boxes.” People with ADHD have a habit of just putting a box somewhere and putting all the stuff that they don’t know where to put in the box. And that works for me. It doesn’t work for a lot of people, but it works for me. And so I do that. Using things that work for you — even if they don’t work for a lot of people — figuring out what works for you and then using it is a great way to include self care aspects in a lot of the daily life stuff.

The concept of “doom boxes” clearly resonated with readers everywher who recognized the description of a behavior (possessing boxes and bags of disorganized items) as something they experienced personally. Arguably, that expression of a trait was recognized and very well-documented under the descriptor “executive dysfunction.”

A 2015 paper on executive dysfunction first defines what the functions are:

The term executive functions refers to a constellation of cognitive abilities that enable and drive adaptive, goal-oriented behavior. These include the ability to generate thought and think flexibly, to update and manipulate information mentally, to inhibit what is irrelevant to current goals, to self-monitor, and to plan and adjust behavior as appropriate to the present context.1 Intact executive functions are critical to the ability to adapt to an ever-changing world, and deficits in executive functioning lead to disproportionate impairment in function and activities of daily living.2

A subsection pinpointed problems with “organization” among other related issues related to executive dysfunction:

The components of executive function act in concert to enable planning and organization, which are higher-order cognitive constructs that allow an individual to identify, prioritize, and properly sequence the individual steps needed to achieve a goal in an efficient manner and adapt as needed to changes along the way.22 The functional consequences of executive dysfunction in daily life include ineffective planning and disorganization.

Children and adults with executive functioning problems struggle to organize materials, regulate emotions, set schedules and stick with tasks. They misplace papers, reports, and other school materials. They might have similar problems keeping track of their personal items or keeping their bedroom organized.

An August 2021 ADDitudeMag.com article about ADHD and cleaning contextualized some of the possible impulses behind doom boxes. Broadly, the article consisted of tips for people with attention-deficit/hyperactivity disorder to gain better control of their homes and possessions:

Many people with ADHD like to keep their stuff in full view because they find that seeing a thing helps them remember to repair it, return it, remove it, or replace it. Unfortunately, clutter is unattractive and distracting. I wish there were a painless way to get rid of clutter. Alas, it takes a bit of work. But it will go more smoothly if you do things systematically.

To keep stuff out of sight but not out of mind, use labeled, see-through containers, bins, and baskets. Once you fill a container, that’s your cue to go through it and toss what’s not needed.

Start in one room, and then move to the room to your immediate right. Repeat, until you have circled back to where you started. Carry a plastic bag as you move from room to room. Anything you want to discard goes into the bag. Toss out old magazines and junk mail, but do not waste time going through loose papers. Just put them in a neat pile and move on. Come back to go through them when you have more time.

Finally, at least one #doombox TikTok video addressed one particular method of eliminating doom boxes. It entailed isolating the containers, “batch sorting” them, and even included instructions on how to break the steps up if necessary so you don’t become too overwhelmed to complete the task:

A November 2021 Facebook post by Our Neurodivergent Life introduced the concept of ADHD “doom boxes,” which seemed to emerge on TikTok around March 2021. The virality of the doom boxes post indicated that many people experiencing executive dysfunction recognized the description as a personal struggle they faced in comprehensively organizing their possessions; conversely, the known concept of a “junk drawer” indicated that a broader pool of people had difficulty organizing their things.

Although the “doom boxes” label attracted extensive discourse and shares of the post, the concept was likely recognized in research and medicine as “executive dysfunction,” a well-documented disruption to the cognitive processes that exist to regulate, control, and manage other cognitive processes. That very abstract sounding descriptor occasionally manifested in daily life as “piles,” “bags and boxes of miscellaneous items,” and the apparently newly dubbed “doom boxes.”

The post ‘Doom Boxes’ appeared first on Truth or Fiction?.