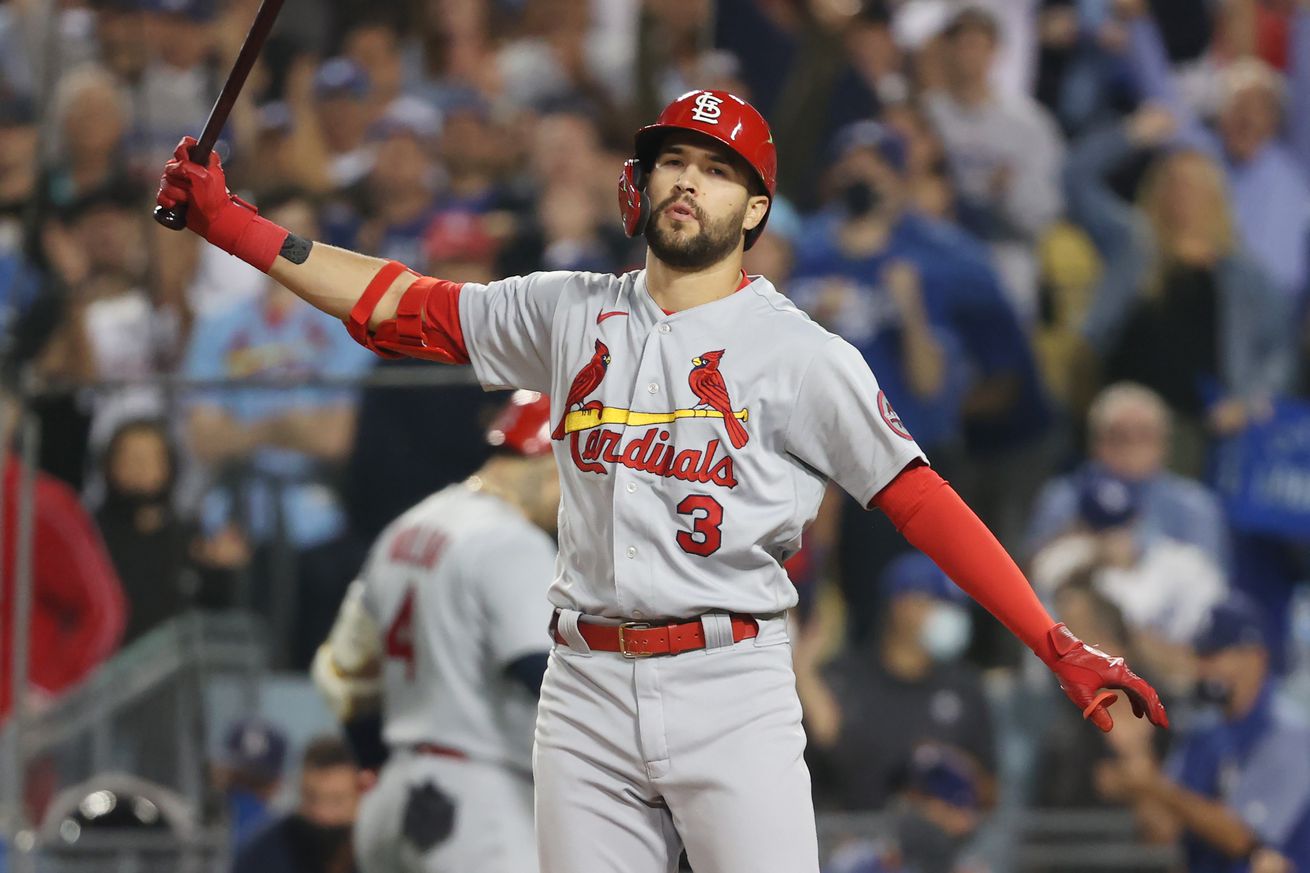 In three “half seasons” of stats, Carlson has shown consistency and growth in key stats. There’s every reason to be encouraged about his future.

On Monday the league announced the winners of the 2021 NL Rookie of the Year award. The Cardinals’ Dylan Carlson began the season as a leading contender for the honor. He finished it the same way, coming in 3rd in the voting behind the very deserving Jonathan India of the Reds and Miami’s Trevor Rogers.

All of that is above average, even when factoring in his primary defensive position – right field – which is known for its offensive production.

So, is that it? Dylan Carlson’s a good player. End of article?

No. Because if you’ve read my work on Carlson over the last 3 years – and this has to be at least the 5th time I’ve devoted an article to him – you’ll know that nothing matters more in evaluating a prospect like him than context.

I wanted to be that guy today, so I even went and looked up the word.

Context /kawntekst/ noun – “the circumstances that form the setting for an event, statement, or idea, and in terms of which it can be fully understood and assessed.”
(Source: Google)

Honestly, it’s really not appropriate to evaluate Carlson’s season stats the same way we might the stats for a 30-year-old, 6-year veteran. Yes, they might play the same position in the same league, facing the same pitchers, with the same defenses in the field. They might even produce roughly the same stats.

But those seasons are not equal. Not even remotely.

A player who produces a “good” season at the age of 22 might just stay “good” for the rest of their career. History tells us, though, that player – if injuries don’t get in the way – is likely to produce “great” or even “elite” seasons when they become 6-year veterans.

That’s why, when we have run comps for Carlson at age 22 in past articles, we don’t get massive lists of “good” players who produced just better than league average production for their careers. Instead, we get borderline Hall of Famers and multi-time All-Stars. Players who were somewhere between bad to ok at age 22 and grew up to high-quality producers when they were age 25 or 26.

Like (my favorite comp) Reggie Smith, Lance Berkman, or Chili Davis. And that’s if we limit ourselves to switch-hitters.

You can see some of those comps and the rest of my process in these two articles: the original comp piece from back in May and the revised version from August that tracks the change in production from Carlson comps through age.

At age 22, players simply have so much room to grow. A 30-year-old – or, heck, a 25-year-old – is already pretty much a finished product. They might be able to refine some skills. But a 22-year-old still has skills to develop.

Kolten Wong, the Cardinals’ last “mature hitter” who reached the majors at a young age, is a great example. At age 22, Wong produced an abysmal .168 wOBA in 62 PAs. The next season, Wong was still pretty bad but showed he should be able to stick in the majors, providing a well-below-average .299 wOBA with solid defense in his first full season. Age 24, though? .310 wOBA. 96 wRC+. His best defensive season so far. And 2.5 fWAR. He was a “good” player relative to position.

That age 24 season wasn’t Wong’s peak. It was just the first time that he was able to display his skills in something close to their maturity. From there forward, in his mid-to-late 20s, he was able to refine the skills he had developed, becoming a routinely above-average hitter, a Gold Glove defender, and a player we all wish was still in St. Louis.

That same player who was far below “good” at age 22 and didn’t even settle into his norms until age 24 now has 18.4 career fWAR. He has the fifth most fWAR from a second baseman since 2014.

Dylan Carlson was a better player by just about every offensive measurement at age 22 than Kolten Wong was at age 24.

What we saw from a player like Wong from age 22-24 is the kind of thing we need to see from Carlson over the next few seasons: growth over time.

He’s starting his career at the level of “good”. As he continues to refine and develop his skills at the major league level, how much gooder can he get?

Carlson has a little less than a season and a half in the major leagues. That allows us to divide his stats into three (roughly) half-seasons: his short debut at age 21 in COVID-shortened 2020, then the first and second halves of 2021.

Admittedly, these are small sample sizes. And samples that, while small, vary in size. But in a short career, these varied and small chunks of time are all we have. What we would hope to see is some kind of evidence of progress or growth during these stretches.

If they weren’t there, it really wouldn’t be a big deal. Slumps, injuries, unsustainable surges… all of those things can affect samples this size. Carlson’s, though, are nice and clean, showing a measure of consistency in important metrics and development in areas that we would expect development in.

What do we see here?

The first thing you’ll probably notice is the last two columns: wOBA and wRC+. These are quality catch-all stats that try to measure overall offensive production, adjusted for ballpark and compared to league average. Carlson’s progress here is obvious. He added 38 points of wRC+ from 2020 through the first half of 2021, finishing around league average at the All-Star break. From there, he gained another 23 points, finishing the second half of his rookie season well above average – 127.

Compare that to the average right fielder. Right field is traditionally an offensive position. It shows up a little in the stats but not as much as you might expect. League average for the position in 2021 is 104 wRC+. At the mid-point of the season, Carlson had matched that total, largely based on a 10.3% walk rate.

How do we contextualize Carlson’s second half? Just as a point of comparison, among qualified right fielders in 2021, Carlson’s 127 second half wRC+ ranks 8th in the game. He’s stuck between two 29-year-olds in Jorge Soler and Hunter Renfroe.

(By the way, the only other 22-year-old on the right field wRC+ leaderboard is Juan Soto with a 163 for the season. Use the same logic we’re applying to Carlson for Soto. He’s INSANE. Definitely tracking as one of the best players in baseball history.)

The second thing I noticed is some baselines that Carlson seems to have established.

Take his BB rate. There’s more variance there than I would like to see, but his three samples range from 6.7% as a 21-year-old to 10.3% the next half season. His full-season 9.2% is probably a good baseline going forward. That is, surprisingly, around league average for right fielders and he’s shown the ability to walk at a higher clip in the minors. A 9% baseline now is already just fine and it could become a very good walk rate in a few years.

His K rates show similar progress. He turned his near-30% rate in 2020 into a league average 24.6% rate this year. He held that the entire season. In the minors, Carlson was consistently below that rate at an extremely young age. He could likely cut into that as he goes, but if he doesn’t, he’s already fine.

The biggest change in Carlson’s stats came in the category that is often the hardest for young players to translate to the majors: power. Carlson’s slugging% has risen from “slap-hitting infielder” levels (.364) to “power-hitting corner outfielder” (.505). A .505 slug% from Carlson at Busch Stadium is a huge number. Busch is a terrible place to hit for power; it’s the second worst stadium in the league to hit a homer in. Carlson lost 3 HRs (xHR) because of Busch.

If that kind of power becomes a regular thing for Carlson, it pulls up an interesting stat.

There is only one Cardinal outfielder since 2010 who has at least 500 PAs and a cumulative slug% over .500. Can you guess who it is? I mentioned him above as a top comp for Carlson.

Tyler O’Neill is close – .497. We’ll just have to see if Carlson can translate that second half number into regular performance. But the fact that he did it for half a season – 249 PA – is already very encouraging. Shoot, who wouldn’t be encouraged if he lost 30 points of slugging from his 2022 second half and settled in to “just Matt Holliday” levels? (Holliday had a .486 slug% from 2010 on.)

We’re seeing what we want to see from Carlson. He has established some critical baselines that are at worst league average. His overall production levels are clearly trending above average. When considering his age and the kinds of comps he has, there’s still no reason to be anything but extremely optimistic.

Carlson is already a good player. Within the next few years, there’s every reason to believe that he’ll develop and refine the skills to be a consistently “very good” right fielder.