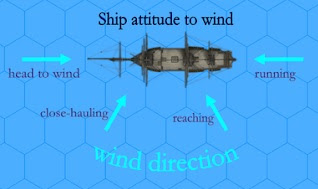 Ship's Attitude to the Wind

I'll put up this post specifically for Sterling Blake, the sailor, with hopes that he will give his stamp of approval.

The orientation of a ship to the wind is called the ship’s “attitude.” There are four attitudes with which the player needs to be familiar: 1) reaching; 2) running; 3) close-hauling; and 4) heading into the wind. The direction of these winds is indicated by the image shown.

The wind's effect on movement can greatly change the speed of a ship depending on its attitude. A ship heading into the wind will always come to a full stop. That is why ships will tack to the left or right of the direction of the wind, close-hauling their way forward.

The most effective speed is achieved by moving with the wind to the left or right rear (reaching), rather than running directly with the wind. A longer description of each of these is given below:

Reaching indicates the ship is travelling nearly perpendicular to the wind, adjusted to fit the hex grid of the battle map. Because of this limitation, we need not be concerned with close, broad or beam reaches for the purpose of the rules (which would require creating six more compass points). The reach is the fastest pont of sail.

Running indicates the ship is moving in the same direction as the wind, with the mainsail is eased out as far as it will go. Steering can be difficult when running, making the ship less stable, so that it may go off course more easily than on other points of sail. The ship can jibe accidentally (turn its stern through the wind), causing the boom on yachts to swing across the ship quickly. Most sailors prefer to avoid running with the wind, which is inferior to the speed achieved through reaching.

Close-hauling describes when a ship is beating or working to windward, when a ship’s sails are trimmed (set) tightly so that it is sailing as close to the direction of the wind as it can go without losing forward momentum. When close-hauling, a ship is moving at its slowest speed while yet making progress.

Heading to the wind describes a course that is too close to the direction from which the wind is blowing, causing the ship to stop moving forward. For the system’s purposes, a ship that has turned its head into the wind will come to a stop once the ship’s movement of that round has been spent. Ships will rarely come head to the wind except when caught in irons (the ship has stalled).

Ships may, if they wish, trim their sails to reduce their speed to any speed less than their maximum, no matter what the ship’s attitude may be.


I do plan to create a list of simple terms that can be addressed by us lubbers when we're talking about these things.

Ship's Attitude to the Wind