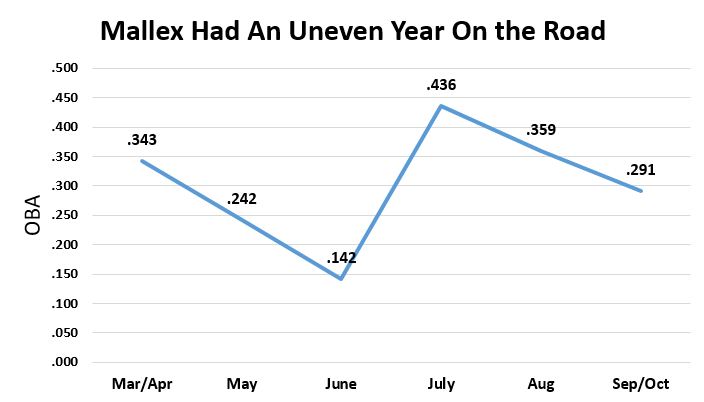 When Mallex Smith joined the Seattle Mariners early last November, Prospect Insider suggested his arrival signaled the beginning of the club’s roster reboot. Since then, there’s been significant roster churn, but Smith remains the most important offseason addition to this year’s lineup. He could potentially be the club’s lead-off man for a long time.

After making our proclamation, someone asked if Smith’s extreme 2018 home/road splits concerned me. My answer was no. In my mind’s eye, the 25-year-old’s career is just beginning. Therefore, one season’s production (or splits) shouldn’t receive too much credence.

Smith’s Mariners career begins in earnest with just 1,041 MLB plate appearances spread over three years. That may sound like a lot, but 2018 was his first full big-league season. Essentially, the sample size is too small to generate significant concern or unchecked optimism.

Still, I kept seeing blogosphere and social media mentions regarding Smith’s terrible numbers last year. Although I know better, the narrative spurred a momentary crisis of confidence in me. Did I miss something?

Just to be sure, I decided to dig deeper than in November. That means I’m actually going to do research this time.

Before looking at Smith’s road numbers, let’s reflect on his 2018 production with his former club – the Tampa Bay Rays. Doing so explains why Mariners general manager Jerry Dipoto had interest in acquiring the left-handed hitter.

Smith hit just two home runs, but was a valued weapon in the Rays’ arsenal. He led the AL in triples and finished with the third most stolen bases in MLB. Moreover, his infield hit percentage (IFH%) was second only to Trevor Story of the Rockies (14.2%).

Clearly, Smith didn’t beat teams with his power bat. Instead, quickness was his calling card. According to STATCAST, only five major leaguers with 200 competitive runs last year bettered the Floridian’s 29.8 ft/sec Sprint Speed.

OBP treats every on-base event equally; a single has the same value as double, triple, or home run. However, we intuitively recognize this isn’t the case; more bases improve the chances of run production.

That’s where wOBA comes in. It assigns a value commensurate with the number of bases reached during a plate appearance. As a result, wOBA better quantifies the contributions Smith creates with his extra base abilities.

Now that we’ve gotten the nerd talk out of the way, let’s turn our attention towards today’s topic – Smith’s performance on the road last year.

Along The Broken Road

It’s easy to understand why Smith’s home/road splits provokes scrutiny and concern among fans, bloggers, and even radio talk show hosts. The contrast is stark. But is there reason for concern?

My inner voice keeps whispering “small sample size,” although part of me can’t help but stare at these numbers and wonder how Smith will perform away from Tampa Bay in 2019.

In 2018, Smith’s .385 home wOBA led all Rays with 180-plus plate appearances at Tropicana Field. Conversely, his road wOBA tied for worst on the team with Carlos Gómez. No one else on the club had as a dramatic swing in their home/road numbers as Smith. For those wondering, Gómez scuffled regardless of location.

So what was Smith’s problem? I scoured his numbers searching for any red flags. Did it have to do with opponents, location, certain pitches, or the handedness of opposing pitchers? Nothing worthy of discussion appeared.

Since we’re talking a small amount of data, couldn’t a bad stretch dramatically affect a player’s split? Or create a perception of a problem that doesn’t actually exist?

Heck yeah, it could. Look at Smith’s road performance by month.

Smith had a rough time on the road during the second two months of the season with June being particularly trying. However, his combined wOBA away from Tampa Bay in March/April, July, August, and September was .354, which more closely resembles his .385 home wOBA for the entire season.

Since I finally had a clue to what caused Smith’s extreme road numbers; I refocused my view of his away stats through a different lens – by half-seasons.

Smith’s production away from Tampa Bay starting on July 1 was far more encouraging. In fact, his .358 wOBA ranked 55th among 220 MLB hitters with 100-plus road plate appearances sandwiching him between Stephen Piscotty and former Mariner Denard Span.

Seeing how Smith compared to Span inspired me to do another set of mental jumping jacks. How did Seattle’s new center fielder compare to current and former Mariners during the final three months of last season?

This time, I’m using the combined wOBA for home and road games. Again, the numbers should please Mariners fans looking forward to watching the club and its new players this year.

Not only was Smith near the top of the list, the team’s new catcher – Omar Narváez – was the leader of the pack. Am I suggesting Smith or Narváez are better at the plate than Mitch Haniger or former Mariner Robinson Canó this year?

Absolutely not, but it’s encouraging.

Okay, I’m feeling better about my initial answer regarding Smith’s home/away splits; I’m still not concerned. His 2018 “issues” were a hiccup fueling the perception of a bigger problem.

Having said that, what are reasonable expectations for Smith this year? There’s definitely a chance he’ll regress. At least that’s what his Steamer projections found at FanGraphs suggest.

Yes, projections are just estimates based on factors such as an individual’s playing history and age. Then again, these predictions provide us with something to obsess over during Spring Training. That’s an important consideration during the Pacific Northwest winter.

Personally, I prefer comparing players to the recent production from the position they’re assuming. There are no algorithms involved with my approach and it isn’t predictive. But it’s fun. Talking baseball is fun.

On that note, check out how Smith’s 2018 compares to Seattle’s recent center field production.

For this particular table, I relied on the Baseball Reference Play Index Tool, which facilitates these kinds of comparisons. Hence, the inclusion of their version of wins above replacement (bWAR).

Clearly, Smith possesses the potential to be Seattle’s best offensive center fielder since 2009 – the first year Franklin Gutierrez was a Mariner.

Sure, there’s a chance Smith tails off from 2018. However, even if he drops to the levels Steamer believes could happen, he’ll be a better than any Mariner center fielder in a decade.

For those wanting more from Smith or the Mariners, bear in mind 2019 isn’t about contending. It’s about pivoting for future sustainable success. If he’s not the center field answer, the team can easily transition to the next best option.

For now though, Mallex Smith is Seattle’s best center field option and deserves the opportunity to prove he can do the job.

Even if his ugly 2018 road numbers might suggest otherwise.

Seattle Mariners Offseason Recap
Houston Astros Offseason Recap
Oakland Athletics Offseason Recap
About Mallex Smith’s Ugly Road Numbers was first posted on February 23, 2019 at 1:29 pm.
©2018 "Prospect Insider". Use of this feed is for personal non-commercial use only. If you are not reading this article in your feed reader, then the site is guilty of copyright infringement. Please contact me at churchill@prospectinsider.com