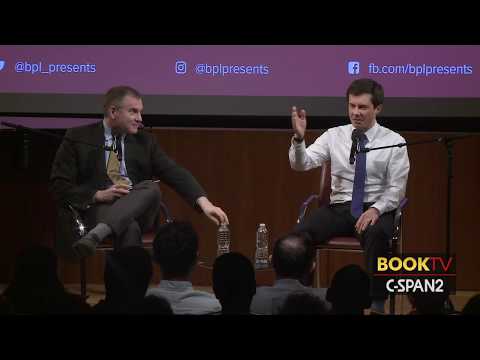 With so much eagerness to drum Trump out of office, so many candidates for the Democratic nomination, and no clear front runner, what say you to the progressive, 37-year-old, gay mayor of a mid-western city with barely 100,000 people—a man with an unpronounceable last name—as the Democratic nominee?

Peter Buttigieg (pronounced, roughly, Buddha-judge), is mayor of South Bend, Indiana, where the Studebaker plan closed in 1963, and it’s been doing a pretty good imitation of Sydney, Nova Scotia, ever since, losing 30,000 residents along the way.

Or it least it was until Buttigieg, a Harvard-educated Rhodes Scholar, became mayor at age 29, and began a series of projects to bring the city back to life. One of these, known as 1,000 homes in 1,000 days, involved refurbishing or demolishing abandoned properties in the city. (Are you listening, CBRM?) Called up by the Naval Reserve in the middle of his first term, he took a nine-month leave of absence to serve in Afghanistan while the Deputy Mayor stepped up temporarily.

His presidential run has attracted interviews on MSNBC’s Morning Joe, The Late Show with Stephen Colbert, and a long sit-down at the Brooklyn Public Library with New York Times Columnist Frank Bruni. Here he tells Bruni his theory about wastewater and the meaning of life:

You can view the rest of the Bruni interview here. (Sorry, I can’t figure out how to embed C-PAC videos.)

Obviously, Buddigieg is an extreme long-shot. He’s polling zero percent nationally, and may not even win admission to DNC sponsored debates. But South Bend is closer to Iowa than Sydney is to Halifax, and that’s where party caucuses will provide the first hurdle for presidential candidates.

For what it’s worth, of the Democratic candidates I’ve listened to at length, Buddigieg seems the most compelling so far.