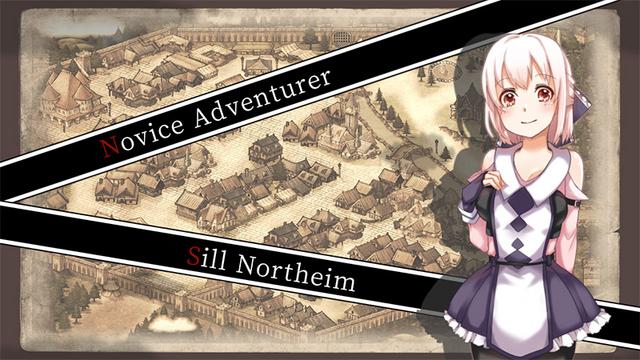 A novice adventuress fights to save the world in Kujirabo’s LAST EMBRYO -EITHER OF BRAVE TO STORY-, an RPG published by OTAKU Plan on MangaGamer.

LAST EMBRYO -EITHER OF BRAVE TO STORY- is a classic-styled RPG following a novice adventuress named Sill. The young girl took on the mantle of an adventurer to lead a carefree life with her close companions and made her way to the city of Alteia, where she plans to begin her quest. Unfortunately, fate isn’t so kind to her. After a sudden crisis, a threat to the entire world emerges, with Sill becoming the only one who can stop it.

Throughout LAST EMBRYO -EITHER OF BRAVE TO STORY- you control Sill as she takes on quests in her pursuit to save the world and help its inhabitants. The game makes use of an active time battle system with no random encounters, solely featuring hand-crafted combat challenges instead. Defeating enemies can reward the player with items, gold, and experience. Additionally, the game allows the player to customize Sill’s stats to adapt her to their preferred playstyle, with an option to easily reset them, allowing players to experiment with ease.

The Developing City Aletia. It was a peculiar island city that existed into the east of the waters belonging to the Imperial State of Granz.The young girl "Sill", who longed to become an adventurer, came here, and the story kicked off.

In this land, there are turquoise plains, vast seas, and hot volcanoes.

And a lot of mystery relics leftover from ancient times...

Sill became an adventurer as she wished and spend peaceful and happy days with her close companions.

"The beginning of the story is always cruel"

No one had expected what kind of crisis Sill would encounter.

But what can be confirmed is that every footprint left by the girl will soon become mythology...

• Add difficulty level selection after the 1st Round

LAST EMBRYO -EITHER OF BRAVE TO STORY- is now available on MangaGamer for the promotional price of $9.71, where it will later cost $12.95.

The game is also available on Steam, where it launched last year and can still be purchased for $12.99. Adult content for this version of the game has to be installed separately, using a free patch available on OTAKU Plan’s website.

If you’d like to support LewdGamer directly, consider donating to our SubcribeStar.