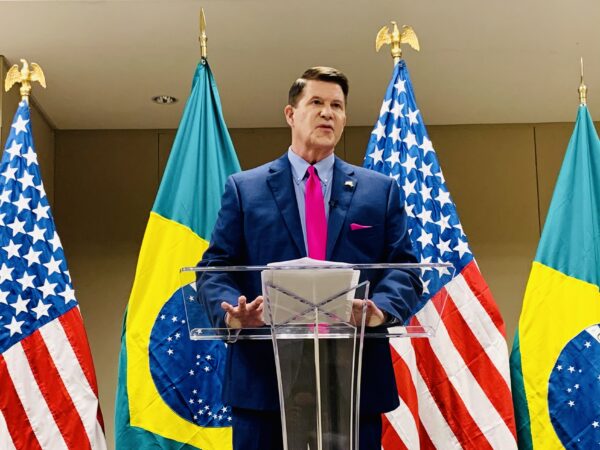 WASHINGTON—The Trump administration scored a victory against the regime in Beijing this year through its “Clean Network” campaign that booted Huawei Technologies Co. out of critical telecommunications infrastructure in many countries.

The effort, while not well-publicized, secured an array of commitments from governments to exclude untrusted vendors from their fifth-generation (5G) wireless networks. As of this month, more than 50 nations, representing over two-thirds of the world’s economy, and 180 telecom companies had joined the “Clean Network” initiative led by the U.S. government.

The alliance includes 26 of the 27 EU member states, as well as technologically advanced countries such as Japan, Israel, Australia, Singapore, Taiwan, Canada, New Zealand, and India.

This triumph for the U.S. government seemed unthinkable at the beginning of this year, as the Chinese telecom giant, a dominant player in the global 5G market, seemed unbeatable.

For years, the United States had sought to convince its allies to shun Chinese vendors such as Huawei and ZTE on national security grounds, and the Trump administration had warned about the risks of reliance on Chinese technologies, which were deeply embedded in the next generation of global telecommunications. But those efforts had failed to check Huawei.

In February, Huawei announced that it had 91 commercial 5G contracts outside of China, with 47 of the contracts in Europe and 20 in Asia. In January, for example, the UK declared that it would allow Huawei to supply 5G equipment, sparking tensions between London and Washington.

“The U.S. is repeatedly pursuing its allied countries to ban Huawei from developing 5G but most of them have denied doing so,” Huawei stated on its website in February.

To turn the tide, the State Department in April launched a campaign requiring a “clean path” for all standalone 5G network traffic entering and exiting U.S. diplomatic facilities, as outlined in the 2019 National Defense Authorization Act. The Clean Path was the first of several Clean Network strategic moves that the administration rolled out to keep U.S. critical data and networks safe from the Chinese Communist Party (CCP).

The following month, the Commerce Department tightened export controls on Huawei, calling it a security threat. The Pentagon later blacklisted the company because of its ties to the Chinese military.

As part of the plan, Taiwan Semiconductor Manufacturing Co. announced in May that it would build the world’s most advanced 5-nanometer chip fabrication facility in Arizona, an important milestone in securing the semiconductor supply chain and a safe 5G network for the United States and its partners.

The Clean Network seeks to address what the U.S. State Department describes as “the long-term threat to data privacy, security, human rights and principled collaboration posed to the free world from authoritarian malign actors.”

The State Department conducted international outreach to explain U.S. actions on Huawei and urged other countries to take similar measures to secure their 5G networks and to protect their citizens’ personal information. Keith Krach, undersecretary of state for economic growth, energy, and the environment, was the person behind the effort.

A former businessman and Silicon Valley veteran, Krach coined the term Clean Network and led the initiative to take away Huawei’s momentum by unifying allies. And within a few months, the network garnered overwhelming international support.

“The Clean Network’s momentum turned the tide on Huawei and the CCP’s 5G master plan,” Krach told The Epoch Times.

“It proved that China Inc. is beatable. And in the process, we exposed their biggest weakness—its lack of trust.”

The biggest weakness of Chinese companies such as Huawei “is that nobody trusts them,” according to Krach. And this trust issue has become a strategic tool for the U.S. government.

Since China passed the National Intelligence Act in June 2017, all Chinese citizens and companies have been legally obliged to turn over any information or data to the communist regime upon request. Huawei is the backbone of the CCP’s surveillance state, according to Krach, and for years, the regime has strong-armed governments around the world to purchase its 5G infrastructure and services.

That’s the 800-pound elephant in the room, Krach says.

“Countries and companies are terrified of the CCP’s doctrine of intimidation, retaliation, and retribution. And that, basically, is a bully. When you confront a bully, they back down. And they really back down if you have your friends by your side,” he said.

The growing coalition is a “security blanket” for countries and telecom operators to guard against Beijing’s retaliation.

Following the U.S. government’s campaign, Huawei’s deals outside of China fell to “probably a dozen” from 91, according to Krach.

In a major win for the Trump administration, the UK announced in July its plans to ban Huawei from future 5G networks, reversing its January decision. The mobile providers in the country will be barred from buying new Huawei equipment after Dec. 31.

It took a while, but the tide also turned in Germany, Krach said, as Berlin prepares legislation that would impose tough new restrictions on telecom equipment providers and make it next to impossible to include Huawei in the buildout of the country’s 5G networks.

Beijing has been furious over the U.S. government’s Clean Network campaign.

In September, the China Daily newspaper, which is owned by the CCP, criticized Pompeo for declaring victory against the Chinese regime.

“The bid to strangle Huawei shows the ruthless method the U.S. administration is using to hold onto the U.S. hegemony in technology,” the paper stated.

In August, Pompeo announced the expansion of the Clean Network program to include clean carriers (ensuring no untrusted carriers, such as those from China, are connected to the network), clean apps and app stores, clean cloud services (protecting Americans’ data), and clean cable (ensuring underwater cables connecting the United States to the global internet are protected). As part of the effort, President Donald Trump signed in August two executive orders to address the threats posed by Chinese-owned popular mobile apps TikTok and WeChat.

Clean Network has also added a number of industry leaders as clean companies, including Oracle, HP, NEC, Fujitsu, and Cisco.

Bringing in clean companies to the coalition was a strategic aspect of expanding the value proposition, according to Krach. These clean companies need to be able to trust the 5G networks in a country in order to invest or expand their operations. If they can’t, they will look elsewhere.

“Announcing that you’re a clean country is going to send a great signal to the U.S. private sector that this is a good place to invest.”

Krach defines the 5G effort as a “beachhead” in a wider economic battle against the CCP. He believes the alliance of democracies is the “golden key,” as it lays the groundwork for many other areas such as clean currency, clean data, and clean Internet of Things.

The next areas outside of technology have already begun, according to Krach, with clean infrastructure and clean financing, which is called the Blue Dot Network to counter China’s Belt and Road Initiative. Other initiatives focus on clean minerals, clean supply chains, and clean labor practices.

For the past few months, Krach and his team traveled to Asia, Europe, the Middle East, and Latin America to secure commitments from governments, telecom operators, and multinational companies to join the coalition.

The integration of the EU 5G Clean Toolbox as part of the Clean Network during his visit to Europe in late September marks a turning point for the U.S. government.

In January 2020, the European Commission, together with EU member states, released the EU Toolbox to ensure secure 5G networks are deployed across Europe.

On Sept. 30, EU Commissioner Thierry Breton and Krach issued a joint statement highlighting their commitment to shared principles on 5G security. They also announced the synergies between the Clean Network and the EU Toolbox. So any country that implements the EU Toolbox will be considered as part of the Clean Network.

“The 5G Toolbox serves as a reference for telco operators’ board of directors, who are required to make the decision on 5G suppliers,” Breton said in the joint statement.

“If they choose a high-risk 5G supplier and something happens, the board members may be liable.”

The same day, NATO also threw its support behind the U.S. government’s campaign, stressing the importance of having a secure 5G Clean NATO Network, which is non-fractured.

Deputy Secretary General Mircea Geoana announced that the majority of NATO countries have committed to joining the Clean Network. Geoana said that the alliance couldn’t afford to have some countries using trusted vendors, while others use untrusted vendors. He also emphasized the importance of having secure civilian 5G infrastructure during peacetime and wartime.

In October, the Three Seas Initiative, a forum of 12 EU states in Central and Eastern Europe, also announced support for the Clean Network at the annual conference in Estonia.

Krach also traveled to Latin America in November to expand the alliance, securing commitments from Brazil, Ecuador and the Dominican Republic to join the network.

NATO members Turkey, Iceland, and Hungary (also in the EU) are still not part of the Clean Network.