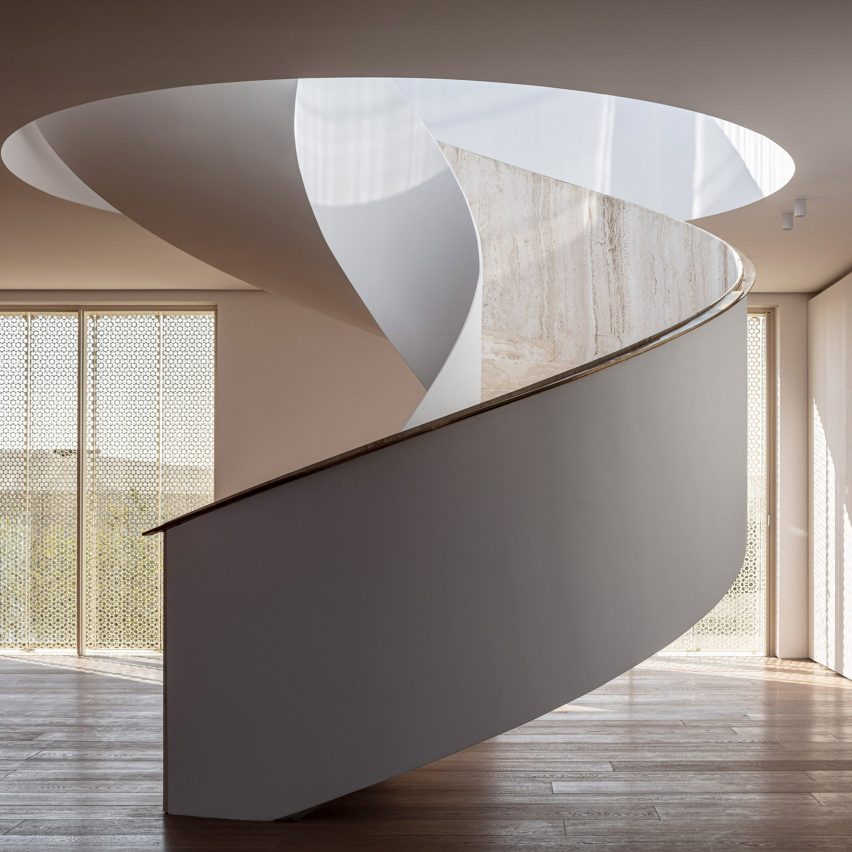 Tel Aviv architecture firms Pitsou Kedem and Baranowitz & Goldberg have used a sandy palette and sculptural details in this residence at the top of John Pawson's The Jaffa hotel.

The Jaffa Penthouse is an apartment on the top storey of The Jaffa hotel in Israel, and one of 30 private residences there also designed by Pawson. 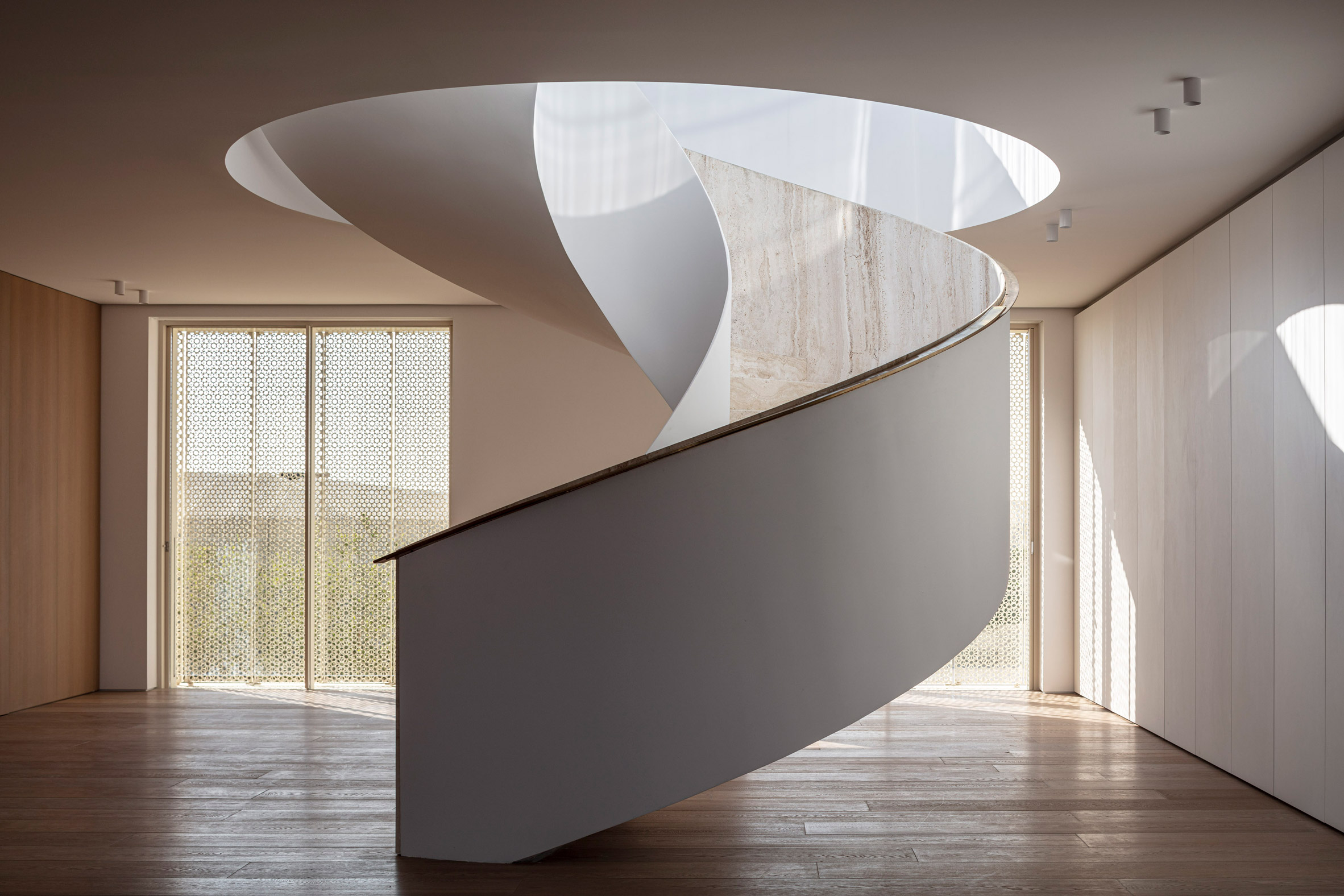 Pitsou Kedem Architects and Baranowitz & Goldberg worked together to design the luxurious property by working off the exterior shell created by Pawson, which has many windows fronted by cream coloured perforated metal screens.

The home spans 1,500 square metres and features panoramic views of the historic Arab port city Jaffa, as well as the Mediterranean sea and Tel Aviv in the distance. 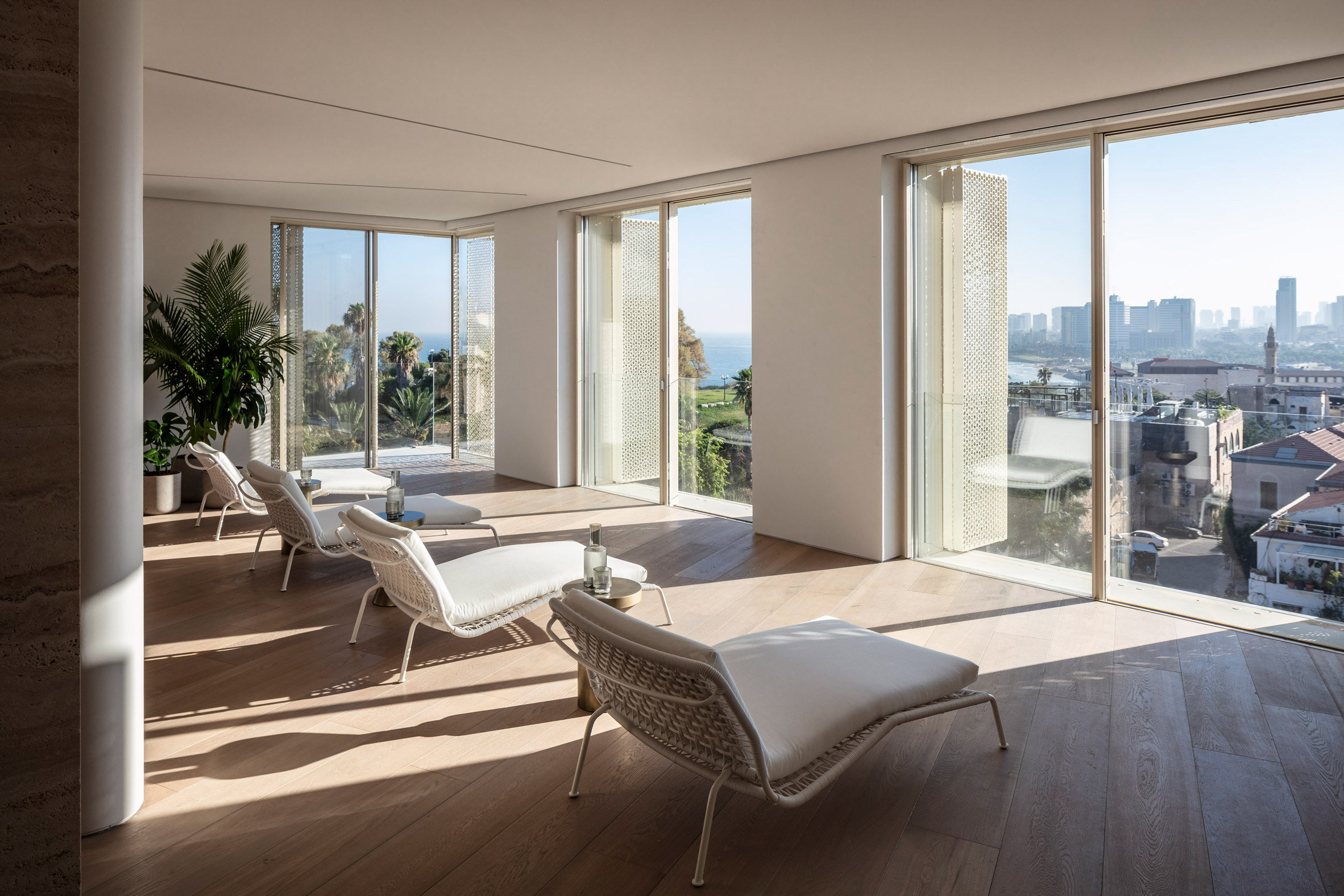 A focal point of the interior design is a spiral staircase that accesses a rooftop patio, which is the same size as the interiors below.

The stair is located near the entrance in the middle of home's floor plan, which comprises three rectangular volumes that are arranged in a curved shape. 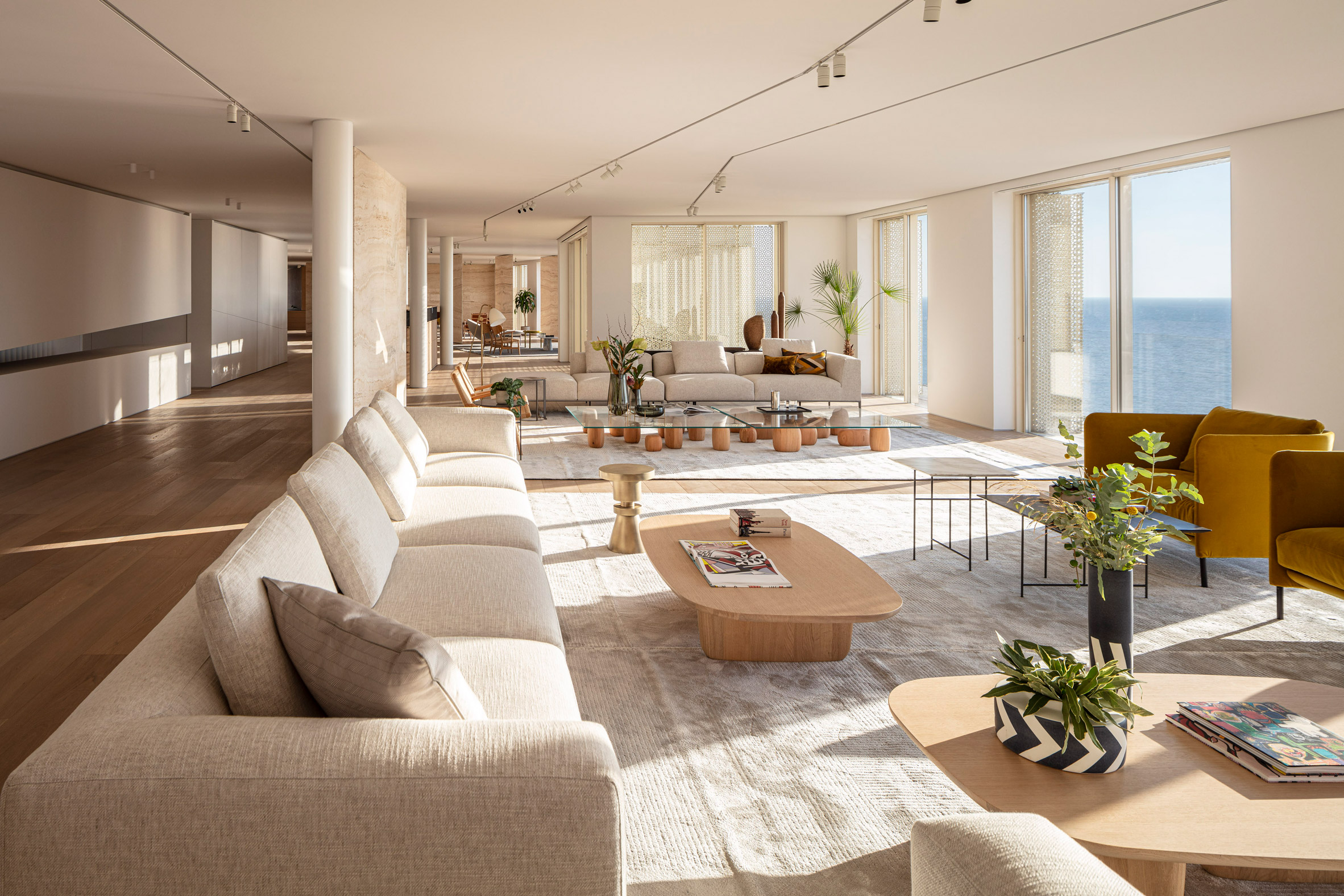 "This penthouse, with its vast breadth of space, led us to think of shapes, division and proportion to complement the juxtaposition of old and new with a true sense of home," said Baraonwitz & Goldberg founders Sigal Baraonwitz and Irene Goldberg.

"Stone sculptural partitions create separations between the different spaces, which on one hand divide and the other, connect, allowing a framed glance of what lies beyond." 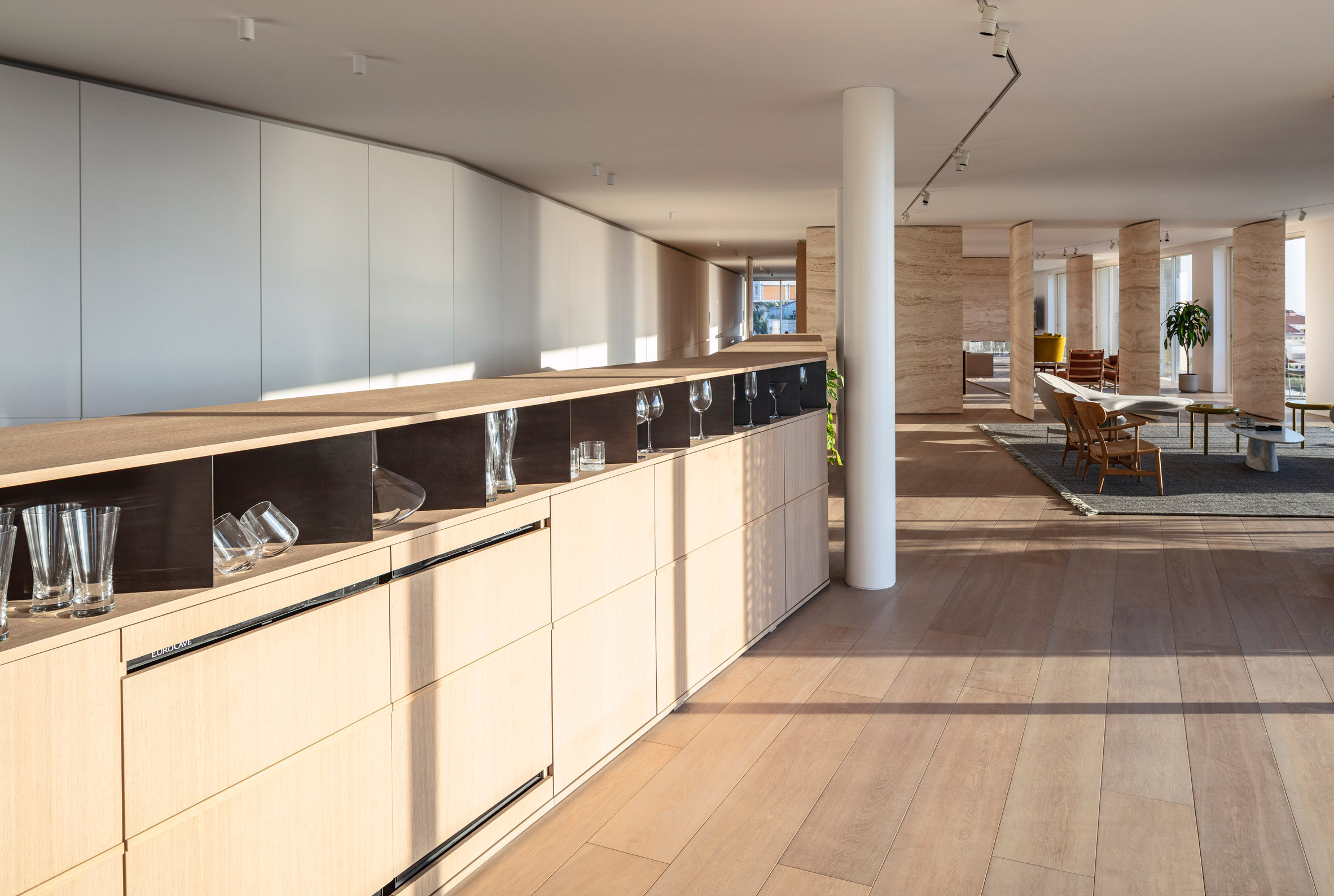 A master suite, which takes up almost an entire one of the home's three portions, is outfitted with a sculptural bathroom vanity that is elevated above the ground at one end.

The interiors have a pared-down aesthetic in cream tones, evocative of the Arab-style buildings that define Jaffa. The sandy Mediterranean beachfront closeby also provided a reference point. 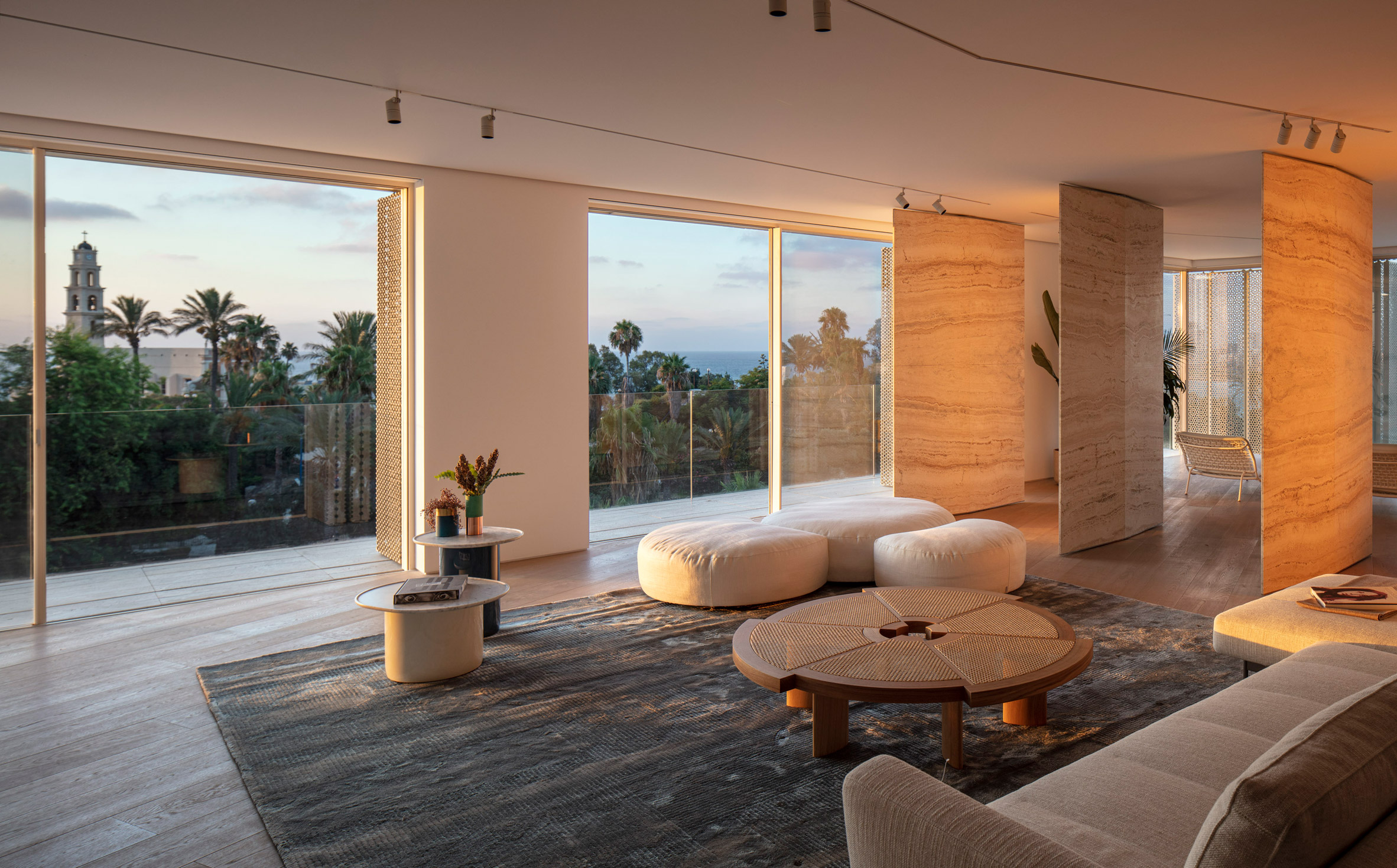 "We blended together the ancient and the contemporary influences in an abstract way, emulating the contrasts between the two in a harmonic and unified design," Pitsou Kedem said.

Local materials like limestone and wood are used prominently, alongside pale fabrics and light walls. Pops of blue, yellow and purple also feature.

Almost all of the furniture is by B&B Italia, De Padova and Carl Hansen. A series of cream couches by B&B Italia define one part of the home, and is paired with rugs and oak coffee tables also by the Italian brand.

Another sitting area has curvy sofas by La Cividia, Carl Hansen oak armchairs and a Baxter white marble table. Chaise lounges are by Divani, while a glass table and armchair are by De Padova. 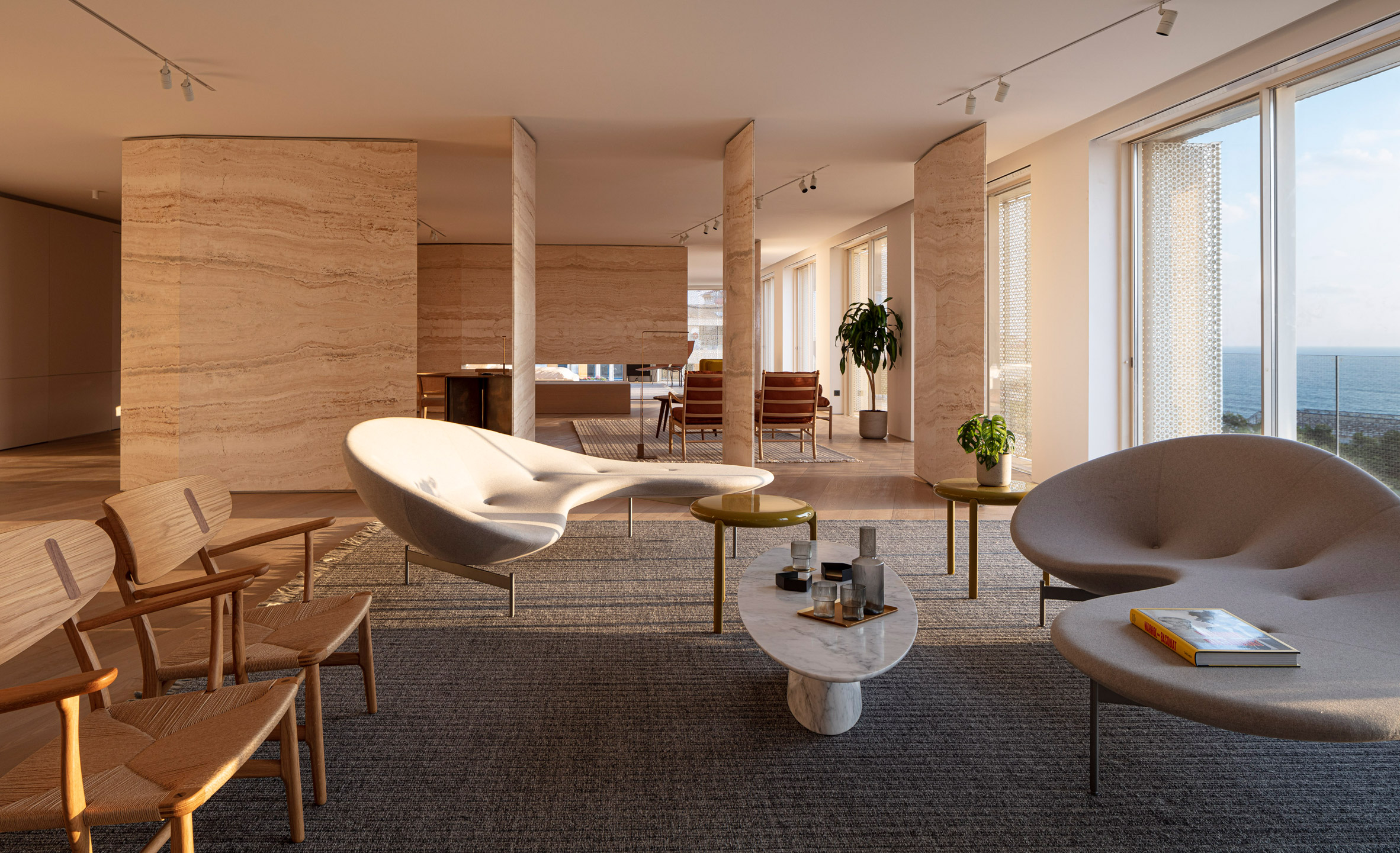 Because of the penthouse's numerous windows, almost all of the rooms can be opened up as indoor-outdoor spaces.

A rooftop patio rounds out the property and has travertine stone floors, an outdoor kitchen and several sitting areas.

The Jaffa Penthouse has services and amenities from The Jaffa hotel, including its outdoor swimming pool, private parking, concierge, and housekeeping and room services. 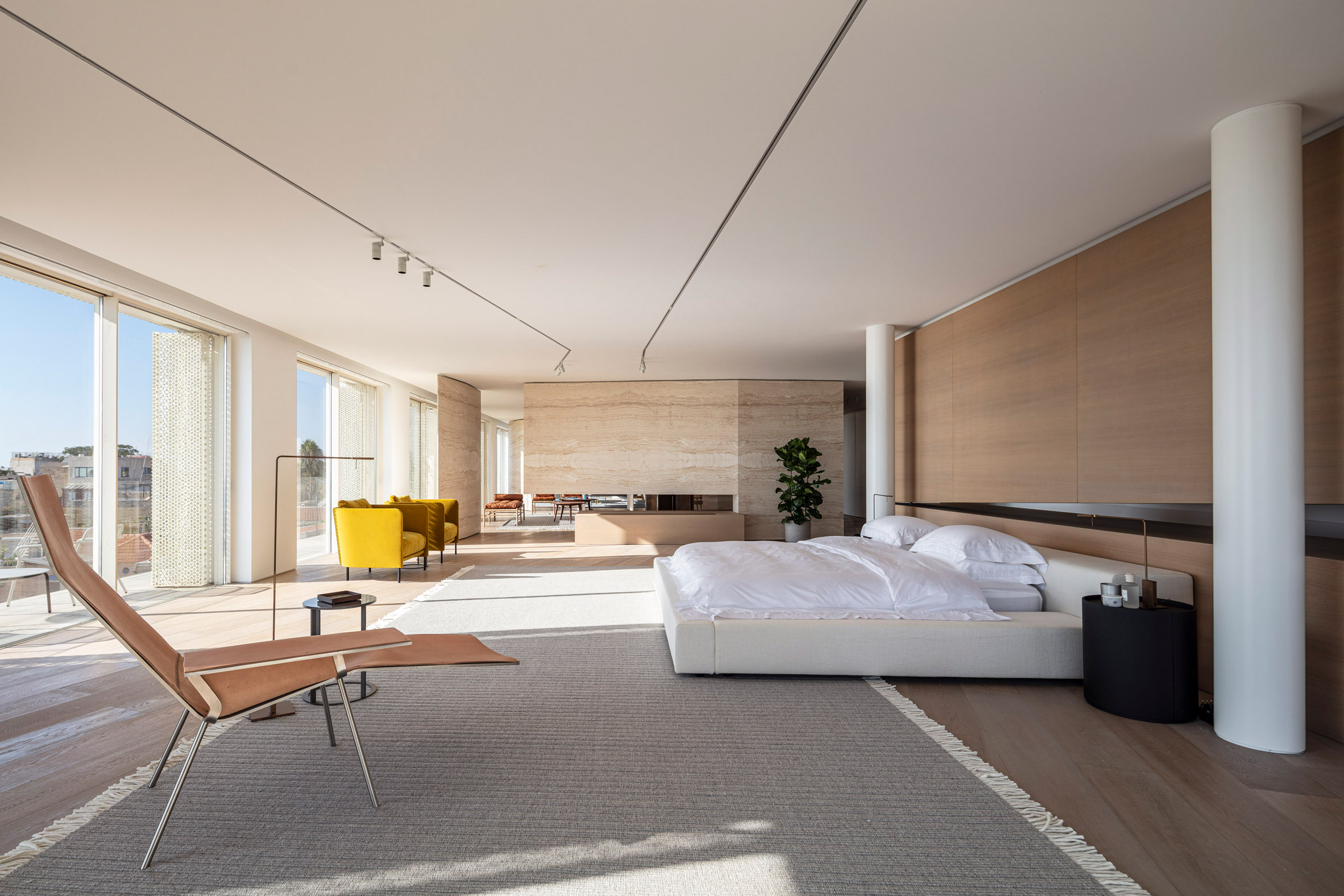 The Jaffa hotel has 120 rooms, some of which are contemporary while others reflect the site's history as a former French hospital in the 19th century.

Also part of the property is the Chapel bar, which was previously a cathedral, as well as Italian restaurant Don Camillo and Golda’s Delicatessen. 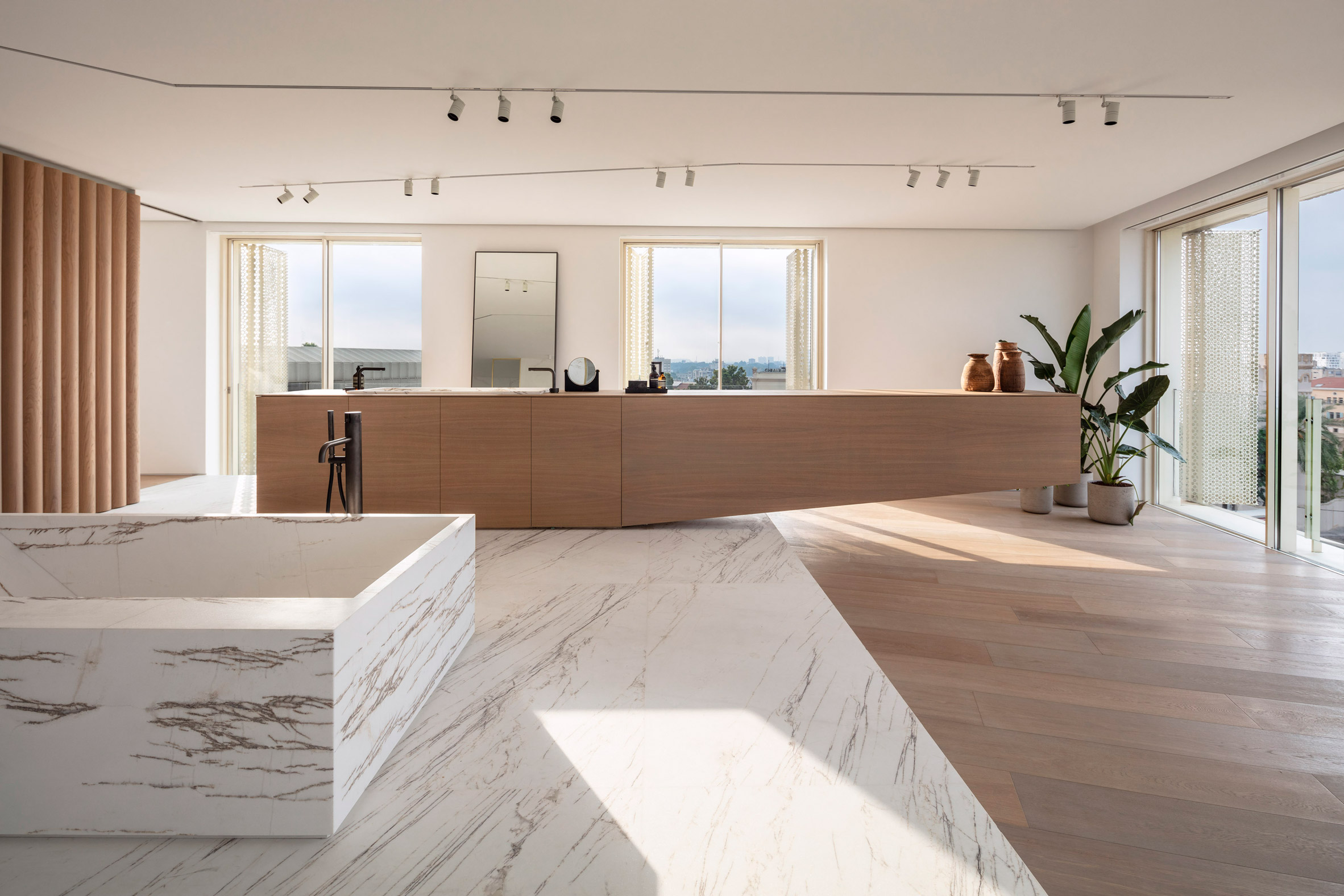 Pitsou Kedem, an eponymous firm founded in 2000, has designed a number of residences in Jaffa. These include an apartment with white plaster and black iron surfaces and a residence located in a building with historic stone walls.

Tel Aviv is very close to Jaffa, also known as Yafo, and the two cities are connected via a promenade along the Mediterranean beach. The greater area Tel Aviv-Yafo is flourishing with an ever-growing restaurant and hospitality sector.

Photography is by Amit Geron.

The post Spiral stair twists up to rooftop of penthouse at Pawson's The Jaffa hotel appeared first on Dezeen.