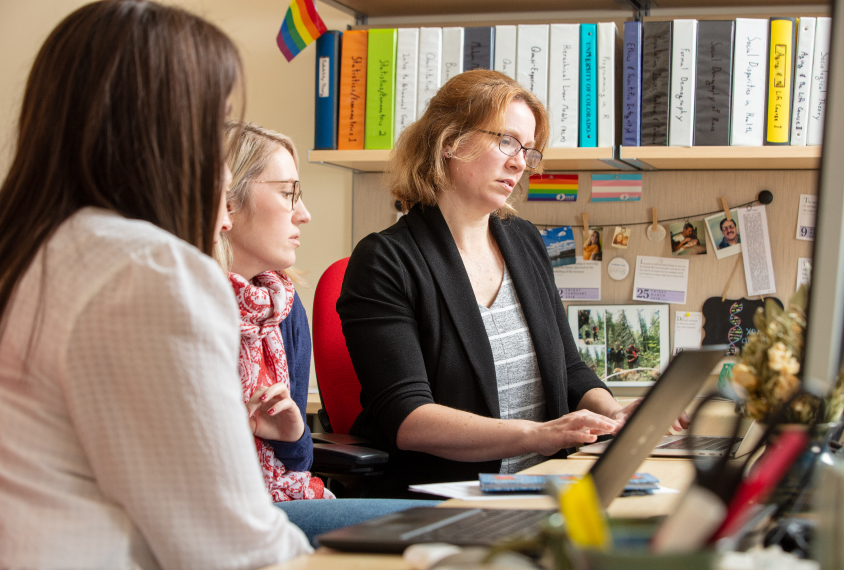 Elise Robinson: Untangling the roots of cause and effect

Elise Robinson’s newest office mates are a ficus tree, its broad variegated leaves enjoying the light from a narrow window, and a pair of small succulents perched one above the other at the edges of bookshelves. And these are just a fraction of what Robinson has in her home in Wellesley, where an expansive sunroom — mullioned windows on three sides, skylights above — hosts a grove of citrus at one end (plus “the world’s smallest olive tree” on the windowsill) and a table with pots of everything from paperwhite narcissus bulbs to a Norfolk Island pine tree at the other.

This was Robinson’s childhood ambition — “to have a house full of trees.” The other was to understand how people make sense of the world, a question that has informed much of her autism research.

“Growing up, I was very interested in the way people think and the way they relate to numbers and numeric logic,” says Robinson, an institute member at the Broad and assistant professor of epidemiology at Harvard University. At the time, she did not know the technical term to describe this: causal inference. But even so, her work — like her habitat — still reflects “an adult version of who I was at 8.”

Robinson also brings the expansive gaze and imagination she exhibited early on to her pursuit of science. Whereas many autism researchers are experts in their own arenas — studying genes exclusively, for example, or deeply characterizing autistic people’s traits — Robinson is a geneticist with a deep understanding of the condition’s clinical presentation.

“Elise recognized both sides of the equation as being important,” says Mark Daly, Robinson’s postdoctoral advisor and director of the Institute for Molecular Medicine Finland at the University of Helsinki. “She has really managed, I think in ways that haven’t been done very effectively before, to bring expertise on both sides together.”

This ability led Robinson to explore the interplay between the different types of genetic variants that contribute to autism — and to lead a study that aims to bring African populations into autism research on a scale no one has attempted before. This study, with scientists across three continents, is “one of my favorite things about my job,” she says. “It was this beautiful blending of really nice, constructive, productive working relationships with people who are approaching it with different skills.”

Robinson is among the few autism researchers who could pull off this cross-disciplinary project. Over the course of her career, she has switched fields multiple times, ranging from anthropology to epidemiology and digging into genetics only when she was already well into her postdoctoral work. Her generous and calm work style, as well as her shrewd experimental designs, have made her a sought-after collaborator. Somer Bishop, one frequent collaborator, told Robinson she wanted to talk on the phone at least once a month. “I don’t care what we talk about,” says Bishop, associate professor of psychiatry at the University of California, San Francisco. “Every time I have a conversation with her, I feel like, ‘We can do this — we can figure this out together.’”

Robinson grew up in Kensington, Maryland, a suburb of Washington, D.C. Her mother was an elementary school teacher and her father a lawyer. Her younger sister is also a lawyer, as is Robinson’s husband, Tom Byron. Robinson, too, has a way of choosing words carefully when she speaks that could be described as lawyerly — precise and persuasive.

As a child, though, her favorite subject was mathematics. When she entered college at Dartmouth University in Hanover, New Hampshire, in 2001, she assumed she would major in mathematics or science, but she struggled to succeed in the formal, lecture-based classes. “The things that made grade school and high school unpleasant for me just made college really, really difficult,” she says.

She discovered anthropology by luck during her second year and loved it: The discipline played to her strength at working independently. Plus, “I just liked it,” she says, in a conspiratorial half-whisper. She immersed herself in trying to understand how people make sense of numbers and facts to develop beliefs about causation, questions she had pondered since childhood.

By the time she graduated from Dartmouth, she was ready to do what she describes as more “activist” research. She enrolled in a master’s program in public health at Emory University in Atlanta, Georgia, where she investigated ways to minimize geographic disparities in access to services for people with developmental conditions. “Through those two years,” she says, “I figured out that what I really like is statistics.”

She specifically became interested in analyzing the heritability of social skills and autism traits. So she pivoted again, this time to a program in psychiatric epidemiology at Harvard. Her advisor there, epidemiologist Karestan Koenen, connected Robinson to other researchers — including Angelica Ronald of Birkbeck University of London in the United Kingdom — who had access to data from twin registries and long-term studies of child development.

Robinson immediately showed initiative and leadership that Koenen says is rare in someone at such an early stage of their career.

“She showed the independence, and ability to initiate, and ability to lead these collaborations in a way that was — I’m not sure I’ve seen it,” Koenen says. Robinson finished the degree in three years instead of the more typical four or five. (Koenen is now another of Robinson’s office mates, sharing space with the ficus and succulents.) 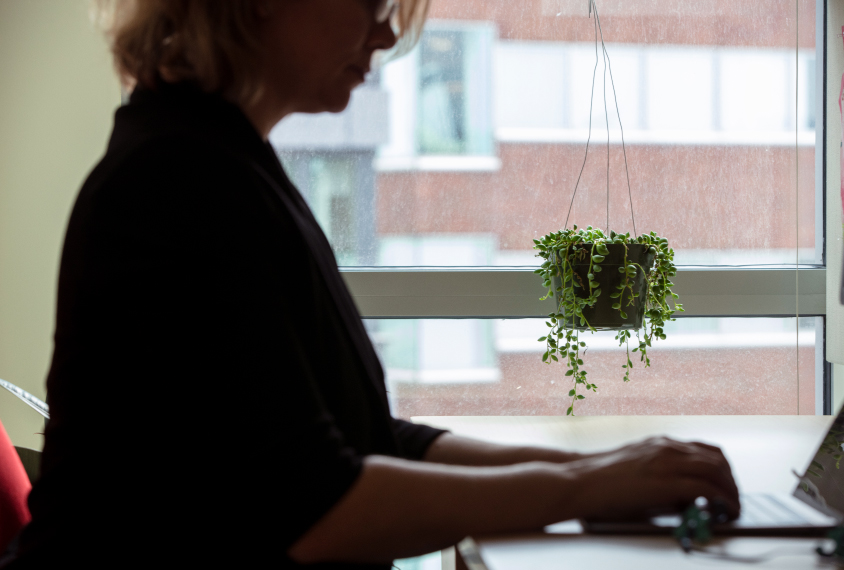 After finishing her degree, Robinson stayed at Harvard. Officially, she was a postdoctoral researcher mentored by Susan Santangelo, though she also continued to work closely with Ronald using data from those British studies. In 2013, one of Robinson’s analyses yielded some of the strongest evidence then available to support the ‘female protective effect,’ a leading hypothesis to explain the skewed sex ratio in autism.

“No one had really looked at [the female protective effect] as a quantitative trait, in spite of knowing that’s a more powerful method,” says Stephan Sanders, associate professor of psychiatry at the University of California, San Francisco, and one of Robinson’s collaborators. The study was emblematic of Robinson’s ability, he says, to “distill big questions down to a testable hypothesis and then do a really good study about it.”

There was one more turn to come in Robinson’s path. One day in 2011, she got drawn into a scientific debate with a postdoctoral researcher in Daly’s lab, psychiatric geneticist Benjamin Neale. No one remembers what the debate was about, but it got so heated that at some point they called Daly in to referee. Daly and Robinson got to talking and realized they were both interested in the idea of autism as one end of a continuum of typical traits. She joined his lab as a postdoctoral researcher not long after.

Robinson knew she was entering one of the top labs in the highly competitive, male-dominated field of psychiatric genetics, and with no prior training in genetics. But she was unflappable, Daly says. He attributes Robinson’s ease in the situation to the fact that she was not driven by her ego or to score intellectual points: She just wanted to learn at her own pace and pursue questions that interested her.

For the statistically minded Robinson, dealing with genetic variants was not a huge scientific shift. “It’s really just a different kind of x variable,” she says. Plus, as she sees it, genetics provides the cleanest, most powerful approach to her long-time interest in establishing cause and effect.

As her familiarity with genetics ramped up, Robinson contributed to a massive analysis showing that genetic variants linked to autism affect social and communication skills in the general population. She also mined data from existing studies to tackle one of the thorniest problems in autism genetics: the relative contributions to autism of rare and harmful spontaneous mutations versus common and mild inherited variants. 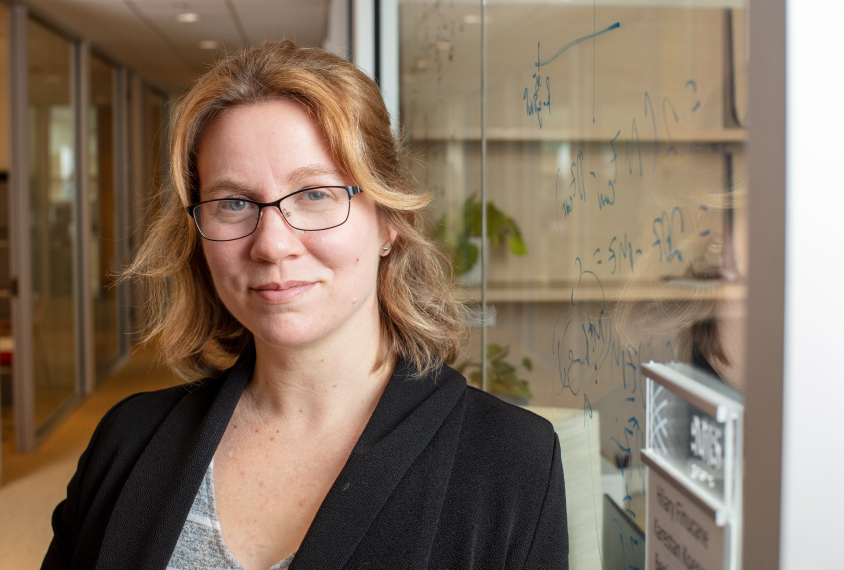 Soon after joining Daly’s lab, Robinson began working with him on a grant application that enabled her to set up her own lab in 2013. The following April, she had her first child, a daughter; three years after that, she was named assistant professor of epidemiology and had a second daughter. Her other achievement of 2017 was the debut of a statistical method she had developed called the polygenic transmission disequilibrium test. Neale remembers Robinson leaping up in excitement when she realized the method could be a better way to investigate common variants linked to autism.

In the study, Robinson and her colleagues analyzed genetic data from more than 6,000 families to show that children with autism inherit more common variants associated with the condition than would be expected by chance. Robinson had been skeptical this would be the result. But as someone more interested in finding the correct answer than in proving she had been right all along, she welcomed the experience. “That was a productive exercise,” she recalls, laughing. “I had a nice time figuring out that I was wrong.”

For the first time in her career, she has also embarked on collecting genetic and clinical data, from more than 5,000 people in Kenya and South Africa1. Robinson’s involvement expanded the project’s scope and ambition, says its research director, Victoria de Menil. “Before she was leading, the study was going to be much more opportunistic,” de Menil says, and the researchers planned to collect brief, categorial data on a few variables. “When [Robinson] came on board, she had this conviction that we needed to be doing very deep phenotyping.”

That meant taking several months to identify detailed questionnaires that would yield reliable results, hiring additional staff members to administer the surveys and asking participating families for more of their time. Since late 2018, the team has collected data from about 1,000 participants.

Back in Boston, Robinson is also developing a lab that falls in line with her sensibilities. She tends to attract people who have backgrounds as unconventional and diverse as her own and gives them plenty of independence.

“If you saw all of us present our research, it would seem very disparate and all over the place, but then Elise can put it all together and show how we are all working for a common goal,” says Caitlin Carey, a postdoctoral researcher in Robinson’s lab.

Robinson also encourages her lab members to maintain hobbies; her interest in horticulture leads by example: “A bunch of people in the lab like plants, so we’re thinking more about what we as a group can grow.”

The post Elise Robinson: Untangling the roots of cause and effect appeared first on Spectrum | Autism Research News.

Elise Robinson: Untangling the roots of cause and effect