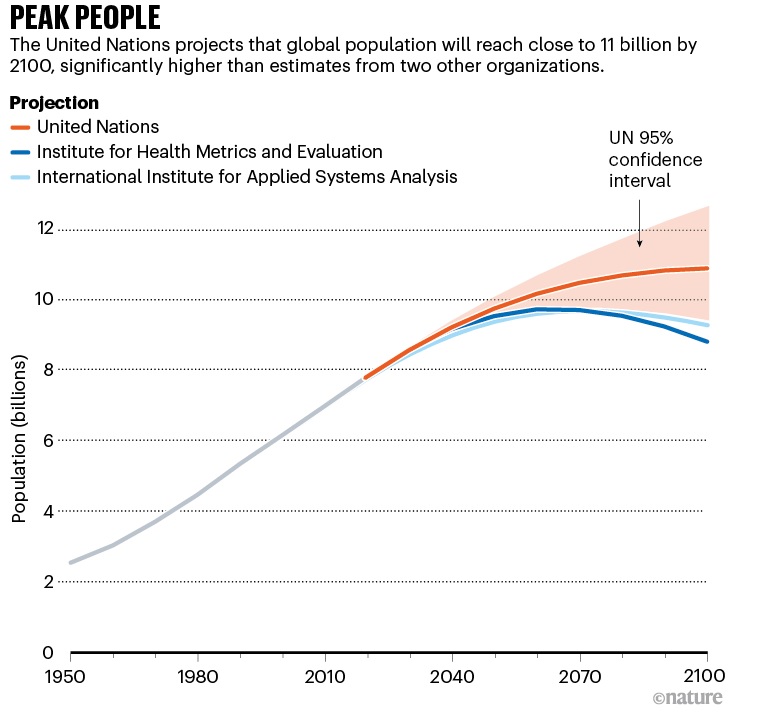 Elon Musk is more concerned with there being too few people rather than too many. He’s right.

Mega-billionaire and entrepreneur Elon Musk is more concerned with under-population than over-population. Speaking at a Wall Street Journal conference, the Tesla and SpaceX boss said having too few people in the future poses an existential risk to threaten human civilization:

I think one of the biggest risks to civilization is the low birth rate and the rapidly declining birthrate. And yet, so many people, including smart people, think that there are too many people in the world and think that the population is growing out of control. It’s completely the opposite. Please look at the numbers — if people don’t have more children, civilization is going to crumble, mark my words.

Musk is right that current demographic trends don’t show global population headed inexorably higher. More people for a while, but trending lower by century’s end. As this chart from Nature shows:

It’s also worth noting Americans in 2020 had the fewest babies since 1979, while the total fertility rate was the lowest since the government started tracking it in the 1930s. And it’s not just the COVID-19 pandemic. Birth rates never recovered after the Global Financial Crisis, costing the US some nearly 8 million additional people since the GFC, according to the Wall Street Journal.

Moreover, Musk is right that there are some big downsides to declining population growth. For example: More people seems to be better for generating technological progress. In the 2020 paper “The End of Economic Growth? Unintended Consequences of a Declining Population,” economist Charles I. Jones points out how fewer kids means fewer people imagining, discovering, creating, inventing, and innovating. From the paper:

In many growth models based on the discovery of new ideas, the size of the population plays a crucial role. Other things equal, a larger population means more researchers which in turn leads to more new ideas and to higher living standards. Automation could enhance our ability to produce ideas sufficiently that growth in living standards continues even with a declining population, for example. Or new discoveries could eventually reduce the mortality rate to zero, allowing the population to grow despite low fertility. Nevertheless, the emergence of negative population growth in many countries and the fact that it has profound implications for the future of economic growth make this a topic worthy of further exploration.

Humans aren’t liabilities. We’re assets to each other, both today and in the future. And it’s one job of public policy to help us maximize our human potential.

Learn more: We need more people doing science research. But maybe AI can help. | Looking at the puzzle of falling US birth rates | Thinking about Elon Musk and global poverty

The post Elon Musk is more concerned with there being too few people rather than too many. He’s right. appeared first on American Enterprise Institute - AEI.

Elon Musk is more concerned with there being too few people rather than too many. He’s right.