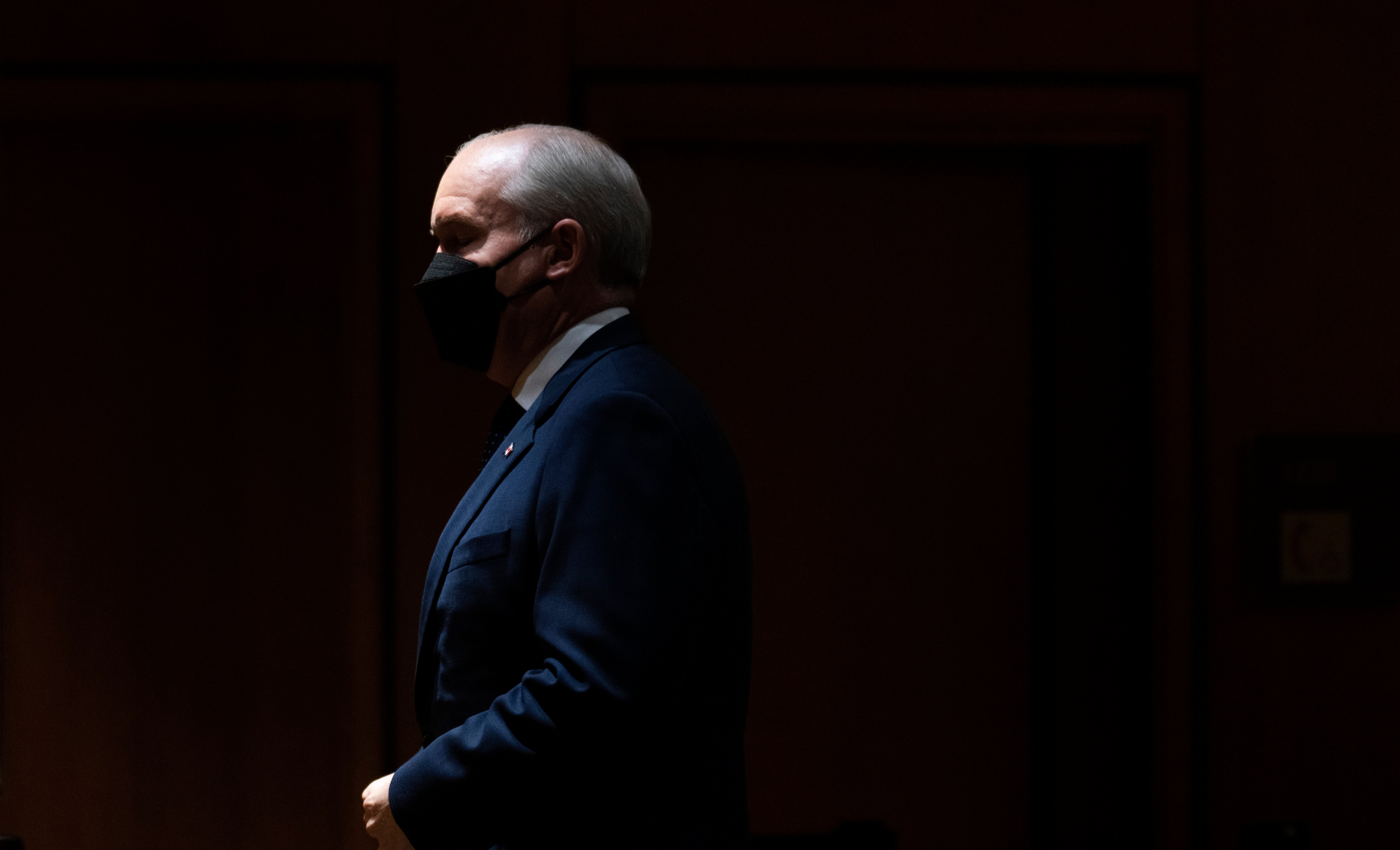 Erin O’Toole and the Multiverse of Madness

A strong rule of journalistic etiquette holds that reporters mustn’t grant anonymity to sources for the purpose of badmouthing political opponents. Follow along with me now as I trample that principle underfoot. I will be ably assisted by a member of the Conservative caucus, here unnamed, with whom I chatted on Monday night.

This MP strongly supports Erin O’Toole’s removal as leader of the Conservative Party of Canada.  As you’ll have heard, they have company. The party’s leadership will certainly be the top issue at Wednesday’s caucus meeting, if O’Toole can even hang on that long.

Replace O’Toole? With whom? “I don’t think it matters. To me it doesn’t. Anything would be better than this. I’m to the point of preferring a name drawn out of a hat.”

Why? The “straw that broke the camel’s back,” this MP said, was “the ham-fisted response to this trucker convoy.” The Conservative leader spent last week and the weekend looking for an attitude in response to the arrival of thousands of protesters in the nation’s capital: from studied incomprehensibility to assorted shades of support and concern.

“No matter what position you have” on the truckers, “he had it too,” the MP said. “Nobody believes the guy any more.”

It’s in the nature of straws that they only break the backs of already-strained dromedaries. The trucker protest follows last week’s partial release of an internal report about the 2021 election defeat that “could have been written by Fred DeLorey,” a longtime Nova Scotia Conservative who was the party’s national campaign manager and is a staunch O’Toole supporter. The report “contained such gems as ‘universal praise for the leader’s performance’… It was a completely sanitized view of what happened.”

What’s the head count on a leadership review? “We got 30 per cent”— the fraction of the Conservatives’ national caucus required by Conservative MP Michael Chong’s Reform Act, which is now law and has been ignored by other parties but has been invoked, under its own terms, by the Conservatives.  The Reform Act sets out rules for the hitherto informal process of turning on a leader and devouring him, and it means O’Toole’s caucus rebels need another 24 votes to reach a majority. “If we’re not there, we’re close,” my source said.

Surely close only counts in horseshoes? Most leaders would realize their tenure was unmanageable if they were contested by anywhere close to half the caucus, this MP thinks. O’Toole may well try to tough it out and punish the rebels, “as we saw with his ham-fisted attempt to politically assassinate Shannon Stubbs,” an MP and reputed internal critic of O’Toole’s who has faced allegations of inappropriate workplace behaviour from former staffers.

I’ll leave my unnamed source behind soon, but perhaps only after canvassing a few more issues with him or her. First, this MP believes only Chong’s Reform Act makes this sudden, quick crisis possible. And that the party leadership unwittingly prodded the rebels into quick action, starting with Chong. Last week columnist John Ivison quoted the urbane Toronto-area MP attempting to perch O’Toole’s opponents on the horns of a dilemma: they could wait for a review vote in the party’s convention in 2023, or they could invoke the Reform Act now. “We are a rule of law party and we have two processes laid out—the caucus process and the one through the party constitution at a national convention,” Chong said. “To short-circuit that, to have an expedited third ad hoc option does not follow these processes.” This received close attention in the caucus. Perhaps Chong thought he was ensuring the party would wait until next year. No such luck.

Then on Monday Rob Batherson, the Conservative Party president and, like O’Toole, a veteran of Nova Scotia Tory politics, appeared to dismiss a small number of recent votes in riding associations calling for a prompt leadership review. “I’m not overly concerned,” Batherson told the Hill Times. “To date, it’s a pretty small percentage.”

I’ll hazard no guess about what comes next. I didn’t know this was coming. I’ll note only that historically, when Conservatives lose a few times in a row, they start to consider pretty radical tactical and philosophical shifts. Often these conflicts have had elements of geographical divides and culture clash as well as ideology.

In 1948 the Conservatives picked George Drew, an Upper Canada College toff turned Premier of Ontario, husband to an opera singer’s daughter and then to the daughter of the Globe and Mail‘s publisher, as leader over John Diefenbaker, a Saskatchewan bumpkin, all jowls and brows. Drew spent the next eight years watching from the dispiriting perch of the opposition leader as Mackenzie King and Louis St. Laurent governed. By 1956, Diefenbaker looked great to Conservatives, and he swiftly became leader, and two elections later he won the largest Parliamentary majority in Canadian history. But by 1967, Diefenbaker’s party was back to losing, and another Atlantic Red Tory group led his unwilling ouster and replacement by another very different leader, Nova Scotia premier Robert Stanfield.

If there’s a trend from this point on, it’s that after the Dief putsch, the party’s east/west, insider/outsider shimmy becomes more pronounced, threatening and even breaking Conservatives’ unity. Brian Mulroney, son of small-town Quebec and Dalhousie University, won a majority to match Dief’s in 1984, but by 1987 his coalition had begun to collapse, and in 1993 his party did. Reform and the Bloc and the rump Progressive Conservatives battled it out for another decade, and only Stephen Harper has managed to beat a Liberal leader among all the Conservative and Conservat-ish leaders since 1988. Harper wanted to leave a viable, united, competitive Conservative party as his legacy. It’s pretty clear that the jury on that is still out, at best.

The big confounding variable in the party’s internal culture since 2015 is Trumpism, seen as toxic by the party brass but cheerfully consumed in great quantity, via Fox News and Facebook, by almost everyone west of Toronto who votes for the party or donates to it. Much of the party is tempted to flirt with that current, when they aren’t afraid to confront it or simply in agreement with many of its tenets. All of this is a very long discussion for another day.

But there’s no guarantee the party will stay united. Indeed it spent nearly half of the last 35 years divided. The question facing O’Toole was always whether he was a large enough political talent to hold the party together when it took a decade of humiliation plus Stephen Harper and Peter MacKay to sew it together in the first place. The same question will await whichever name next comes from the hat.

The post Erin O’Toole and the Multiverse of Madness appeared first on Macleans.ca.

Erin O’Toole and the Multiverse of Madness