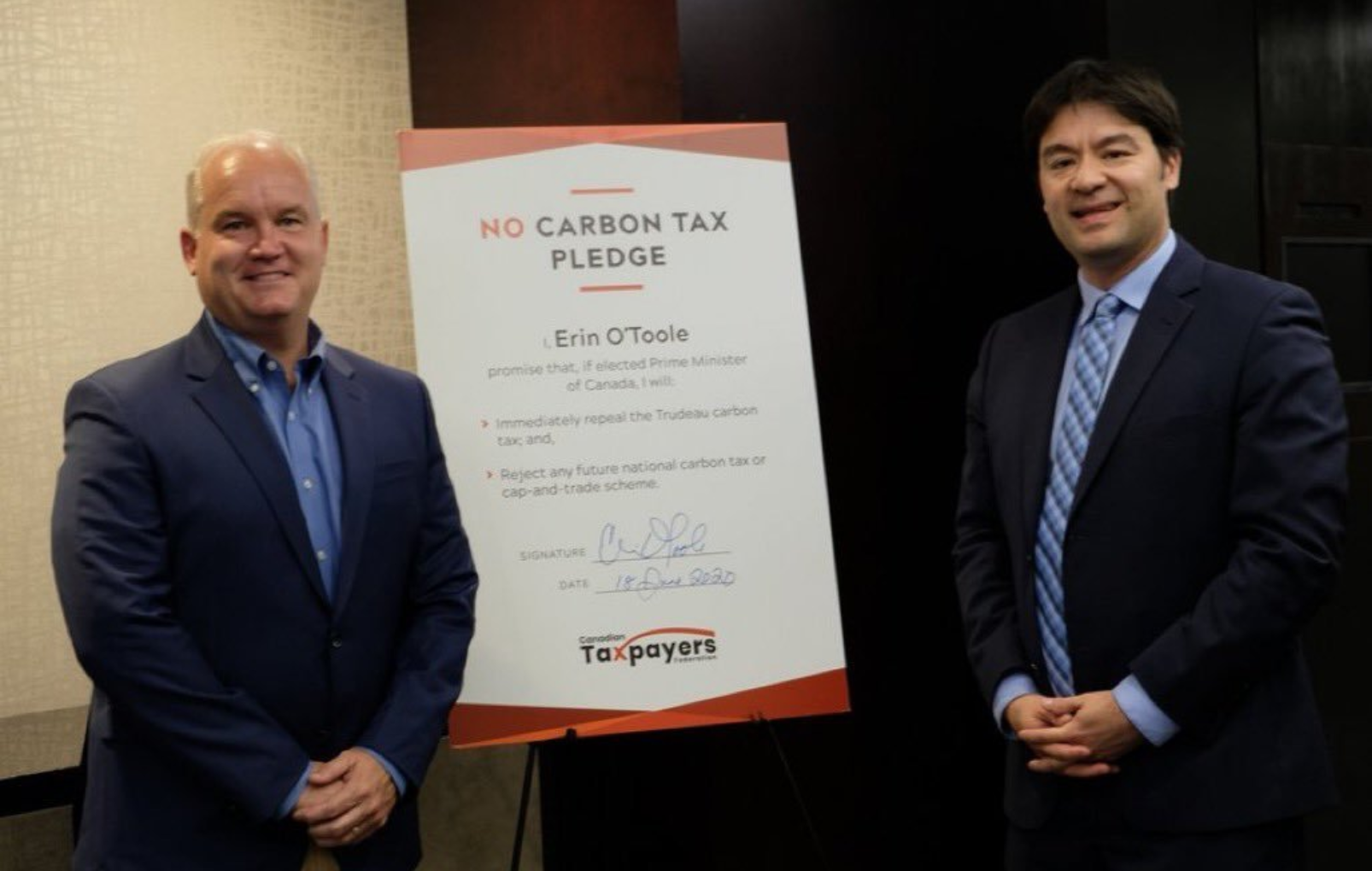 When word of Mr. O’Toole’s plan to put a price on carbon as part of the Conservative election platform leaked to the CBC on Wednesday followed by his confirmation yesterday, no one could have been more shocked than conservatives here in Alberta, where under Premier Jason Kenney opposition to any form of carbon tax has become a fundamental pillar of the party’s core beliefs.

The reaction of many Conservative true believers in Wild Rose Country was shocked and bitter.

Former Wildrose and United Conservative Party finance critic Derek Fildebrandt straight out called Mr. O’Toole a liar on his online right-wing news and commentary website. “O’Toole lied. And his carbon tax is worse than Trudeau’s,” screamed the headline over his commentary.

“I, @erinotoole promise that, if elected Prime Minister of Canada, I will: Immediately repeal the Trudeau carbon tax; and, reject any future national carbon tax or cap-and-trade scheme,” Mr. Terrazzano quoted the coroplast sign to which Mr. O’Toole affixed his signature.

Back in the fall of 2016, when Mr. Kenney left federal politics to lead a campaign to unite Alberta’s two conservative political parties, he was one of the most powerful leaders of the conservative movement in Canada, someone who might well return to Ottawa someday to lead the federal party. There was no question of his opposition to carbon taxes.

His effective campaign to topple the Alberta NDP relentlessly attacked premier Rachel Notley’s carbon levy as the worst thing imaginable for Albertans and their province’s economy.

In 2018 he joined newly elected Ontario Premier Doug Ford at a “Scrap the Carbon Tax Rally,” where they formed a mutual admiration society, boasting of their “bromance” and vowing not to give an inch in their opposition to carbon taxes.

At the end of that year, Maclean’s Magazine featured Mr. Kenney, Mr. Ford, Saskatchewan Premier Scott Moe, and then federal Conservative leader Andrew Scheer on its cover, proclaiming them to be “a powerful new alliance of conservative leaders … taking a stand against the Liberals’ carbon tax plan.” The cover headlined them as “Justin Trudeau’s worst nightmare.”

If Mr. Kenney wasn’t seen as the unofficial leader of Canada’s conservative movement, he was certainly a contender.

When his Alberta electoral campaign succeeded in 2019 and his UCP became Alberta’s government, he was revered by Conservatives throughout the Dominion. If any of them dared to challenge his implacable opposition to carbon taxes, federal or provincial, it wasn’t apparent.

But while Mr. Kenney’s attitude may not have changed, that was then. This is now.

In October 2019, Mr. Scheer fumbled and lost the federal election that was his to win.

Since then, and through the pandemic, Mr. Trudeau’s Liberals have dominated the polls in most parts of the country. Mr. O’Toole’s best efforts to challenge him seem to have had all the effectiveness of writing on water.

Recent national polling suggests that if a federal election were held tomorrow, Mr. Trudeau would not only win, but restore the majority he lost in 2019.

While Conservatives remain the dominant force in federal politics on the Prairies, Mr. Kenney’s United Conservative Party has seen a dramatic reversal of its fortunes, including a lagging economy, series of highly unpopular policies and scandals, a school curriculum that’s become a national disgrace, perceptions on both sides of the aisle it’s mishandling the province’s response to the COVID-19 pandemic, and a full blown rebellion by about of a quarter of its MLAs opposed even to the weak measures taken by the government to control the pandemic.

It doesn’t help that a green-tinted Democrat now occupies the White House in Washington either.

Mr. Kenney’s personal approval level keeps falling too, and is now said to be near the bottom of the pile for Canadian premiers.

The days Mr. Kenney could tell other Canadian Conservative leaders to keep up the fight against carbon taxes and be assured they’d snap to attention are over.

Mr. O’Toole may have had his come-to-Jesus moment when he read the polls and saw what Canadians outside the Prairies thought about the need for Canada to play a meaningful role mitigating global climate change.

Or maybe it was when the Supreme Court of Canada said, no, gentlemen, sorry, but the federal government had a right to govern the federation – including putting a price on carbon.

His carbon tax proposal may be problematic. The idea Ottawa should tell Canadians what they can spend their carbon tax credits on is not going to be popular anywhere, especially for a party that constantly accuses its opponents of advocating a “nanny state.”

Still, this means that whether or not the prideful and inflexible Mr. Kenney likes it, carbon taxes are coming to Canada in some form, no matter which party forms the next government.

Mr. O’Toole’s willingness to sign onto the elite consensus that carbon must be taxed shows Mr. Kenney’s influence is waning, quite possibly along with that of his friends at the Canadian Taxpayers Federation, the organization he once led.