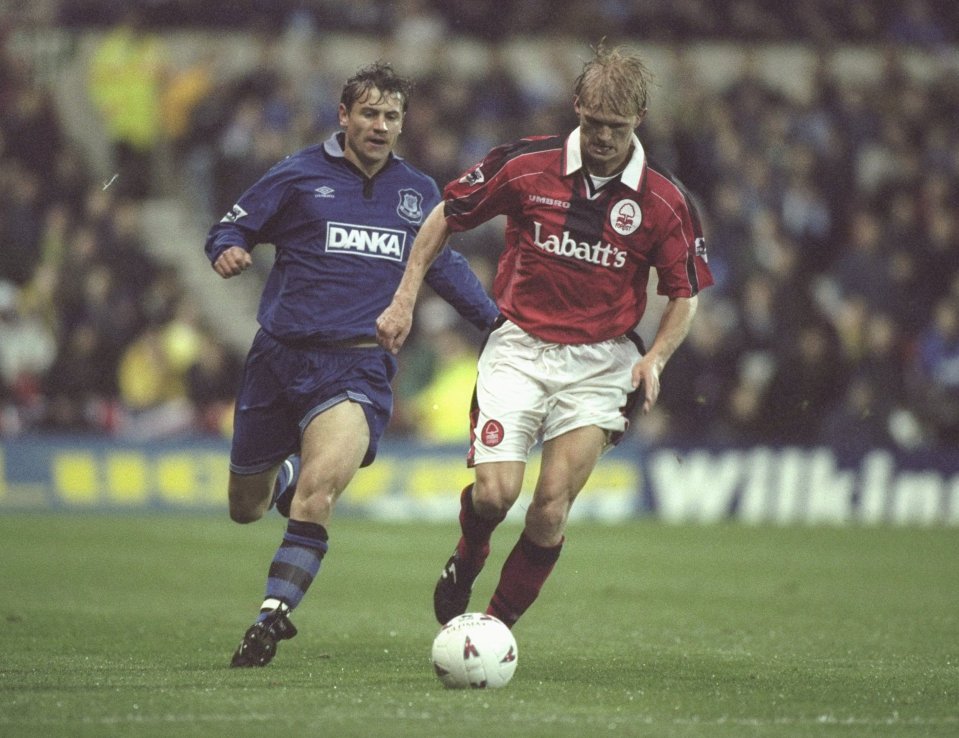 Erling Haaland is the name on everyone’s lips right now ahead of a huge summer transfer window.

Borussia Dortmund’s Norwegian ace is already ripping up the record books in the Champions League at just 20 years old.

His father, Alf-Inge, is also returning to the news, accompanying agent Mino Raiola in Madrid and Barcelona as they sound out potential deals for the striker.

Manchcester United, Man City, and Chelsea are also set to be in the market for the forward, each having their own reasons to spend big money on the talented target man.

And if Erling were to join a Premier League side he’d be following in his dad’s footsteps.

Alf-Inge could play a bit too, you know, and spent 10 years in England. His son was even born in Leeds and supports the Whites.

Before he got to Elland Road, though, Alf-Inge first arrived on the scene in England with Nottingham Forest.

He should actually have signed for the club under legendary boss Brian Clough in 1992 but eventually the deal was concluded after he’d resigned and the Tricky Trees relegated to Division One – what is now The Championship – in 1993.

Alf-Inge Haaland signing for The Reds back in October 1992, pictured here with Brian Clough and Ron Fenton.

Haaland wasn’t first choice to start with at Forest but was part of the promoted side that made its way back to the top flight. Even in his first two Premier League campaigns, 1994/95 and 1995/96 he only made 37 appearances, and scored once.

Capable of playing in defence and in midfield, Alf-Inge grew into English life alongside compatriot Lars Bohinen at the City Ground. Although it wasn’t without its downs, which included being punched by a teammate in training.

Not one to shirk a battle, Haaland allegedly kept raking at Stan Collymore’s Achilles and after being warned on two occasions the striker lashed out.

His ex-teammate admitted: “The first time I said: ‘easy Alf’, the second time I said: ‘Alf have a ******* word with yourself’ and the third time he was left looking up at me from the turf.”

Teammates of the duo were keen to see a lighter side to the incident though.

“The day after I knocked out Alf-Inge Haaland in a training-ground fight, I walked back into the dressing-room to be greeted by Stuart Pearce and the lads singing the Rocky theme tune,” Collymore said in a Daily Mirror column in 2019.

Even manager Frank Clark recalled Collymore’s clump: “I remember him decking Alf-Inge Haaland with a left hook during training. I described it as a Henry Cooper special.”

Haaland at the double!#OnThisDay in 1996, #NFFC defeated @Arsenal in Stuart Pearce's first game as player/manager thanks to Alf-Inge Haaland's brace at The City Ground. pic.twitter.com/VLQMHaikPn

In 1996/97, Haaland finally became a first-team regular in the east Midlands but unfortunately this was as the club’s fortunes began to crumble.

He played 35 times for Forest that season, scoring goals at Old Trafford against Manchester United, twice in a win over Arsenal, while also getting strikes against Sunderland, Blackburn and Middlesbrough, but his valiant all-action displays couldn’t turn the tide and they were relegated.

Haaland, though, was snapped up by a Leeds United side keen on climbing the Premier League table for £1.6million. Although, his knowledge of the Tetley Brewery suggests it may not have been just football tempting him to Yorkshire.

Having joined in July 1997, the storyline which would amplify his career began two months later.

In a match with rivals Manchester United on September 27, he continually clashed with Roy Keane and eventually the Irishman lashed out, clipping Haaland but doing more damage to himself.

“I was trying to trip him up rather than kick him. I knew it probably meant a booking, but f*** it…” Keane said later.

The tackle, though, saw him catch his studs in the turf, tearing his cruciate ligament. Haaland wasn’t to know but stood over his opponent telling him to stop play-acting.

The Norwegian’s career continued, scoring seven times as he helped propel the Elland Road outfit to a fifth-place finish.

| #OnThisDay in 1999, #LUFC defeated West Ham 5-1 at the Boleyn Ground, with goals from Hasselbaink, Smith, Harte, Bowyer and Haaland pic.twitter.com/WrbYuxZVE4

He added Liverpool to the names of sides he scored against, something which has clearly never left his mind.

After netting against the same side for Red Bull Salzburg back in 2019, his son Erling told reporters: “He’s always telling me ‘I scored at Anfield, I scored at Anfield!’ Now I can say it back to him: ‘So have I’.”

His efforts in 1997/98 fired Leeds into the UEFA Cup and despite a change of managers, with David O’Leary replacing George Graham, Haaland remained a regular and helped them to fourth-place in 1998/99 and got them another shot at the UEFA Cup.

They would lose out in the semi-finals to Galatasaray but Haaland’s game-time began to dwindle as O’Leary transformed the side and in June 2000 he would leave for Manchester City in a deal worth £2.5m.

On their return to the Premier League after four years away, manager Joe Royle named Haaland, a player he had chased for two years, his captain.

Royle said proudly on his arrival: “I’ve been a big admirer of Haaland for a long time. He’s a versatile player who can play anywhere in midfield or defence and he will be an important part of our Premiership campaign.”

He was right, the Norwegian was a firm fixture, playing in 35 league matches.

Two of the games he missed were the final ones of the season, Haaland and Keane had caught up with each other again before those.

They had clashed previously too, with a bit of needle, but on April 21 2001, it was different. After 85 minutes the Irishman went in high and recklessly on his opponent with a brutal challenge.

Haaland was feeling oddly humourous after the fateful match.

“There are always hard fouls in a game like this, but that was well over the top. I won’t tell you what he said to me. Let’s just say it wasn’t very nice. I’m only glad my leg was off the ground, otherwise he would have done me a lot of damage. I must upgrade my insurance the next time we play Manchester United.”

There would be no next game against the Red Devils, though. The knee Keane didn’t clatter with venom was the real problem and it had already been playing up. Surgery would be needed to try and correct the issue.

City had been relegated in his first season, and he attempted a comeback in December 2001 but four short substitute appearances is all Haaland would make.

In February 2003, via a clause, Man City terminated Alf-Inge’s contract, which had been due to run until 2005.

“I have had a great career in football, something I would not change for the world,” said Haaland. “I have had 10 good years injury-free and consider myself lucky to have had the opportunity to play football as a career.”

His legacy as a player in the Premier League remains but as a father it could be about to begin.

Haaland’s former clubs are in action on talkSPORT on Saturday.

To tune in, click the radio player below or HERE for the live stream.

Here are the other ways to listen…

Radio – talkSPORT is available across the United Kingdom via DAB digital radio and on 1089 or 1053 AM.