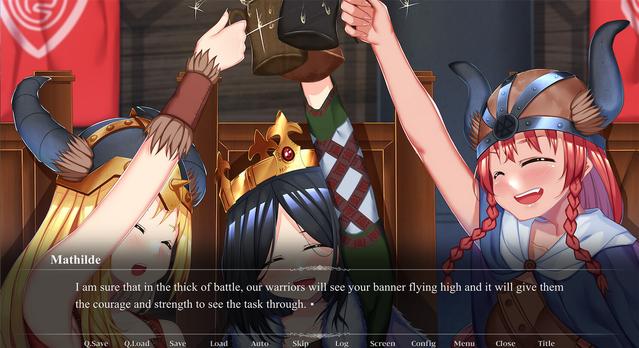 Beautiful Vikings set off on an adventure to defeat an octopus monster in King Key Games’ King of Vikings, now available on Itch.io.

The most recent addition to King Key Games' King of series of games, King of Vikings aims to take players back in time to the age of Vikings. The game is a short, comical visual novel with anime-styled characters and rustic, painted backgrounds. Originally, the game was released on Steam back in February of 2020 but has since been made available on Itch.io.

When a colossal octopus monster started attacking the boats of raiders and fishermen off the Western Fjords, the people of Vestland were beside themselves with worry. Viking raiders and mere fishermen alike relied upon this ocean, now fraught with danger. The story's hero, Prince Ragnar the Silver, was summoned by Queen Mathilde to rid the kingdom of this menace, that the boats would be safe to cast off once again. Along with Helga and Freja, two Valkyries chosen by the queen to aid your expedition, you must slay the tentacled beast. Can Prince Ragnar and the girls triumph against the monster or will the kingdom of Vestland crumple before its mighty tentacles?

Will you be able to slay this foul beast or will Vestland fall to ruin? Only you can find out by playing King of Vikings.

You can buy King of Vikings on Itch.io for the discounted price of $3.19. When the sale ends, the game will return to its original sales price of $3.99.

If you want to support LewdGamer directly, consider subscribing to us on SubscribeStar.