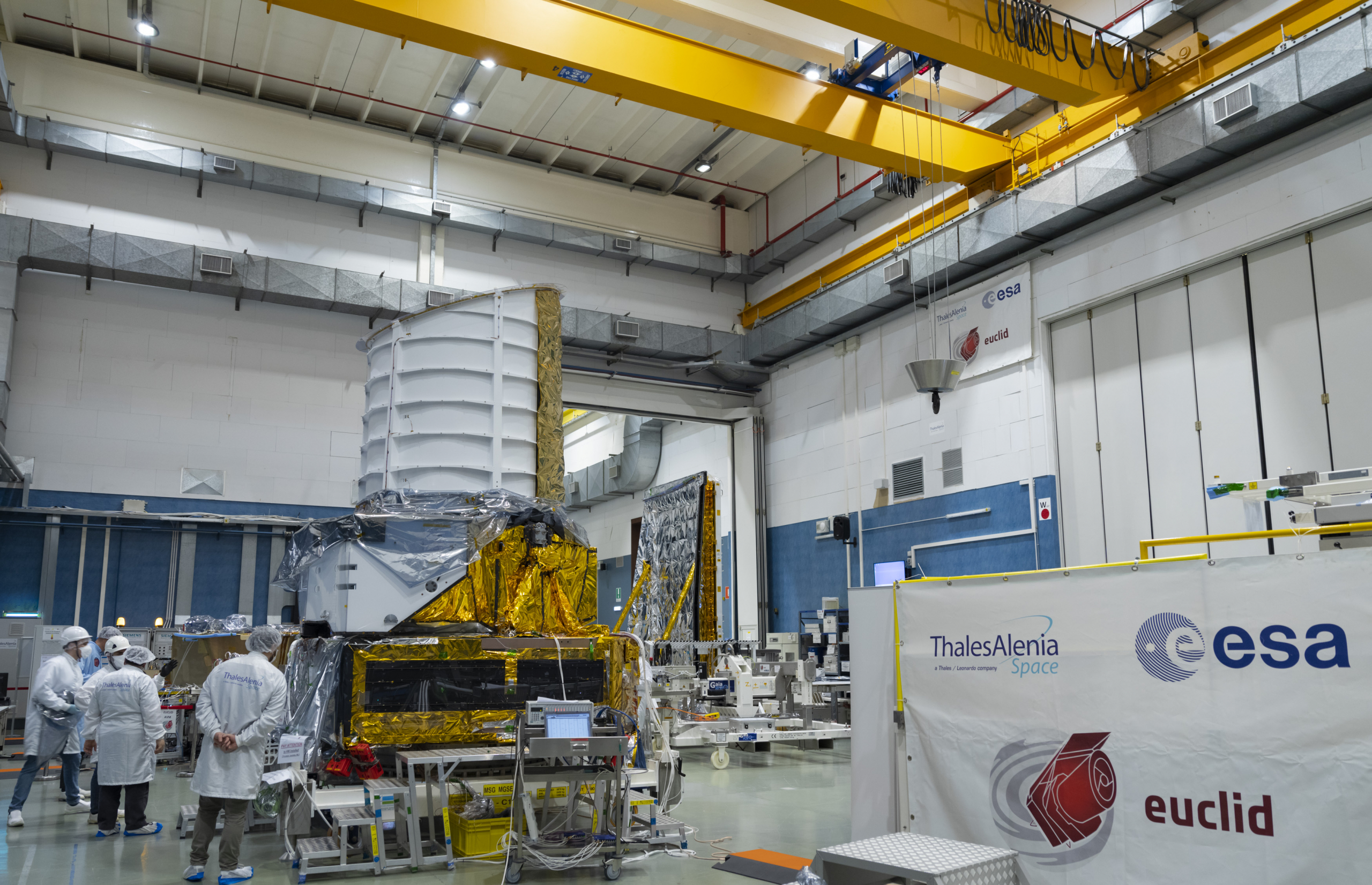 The European Space Agency’s (ESA’s) Euclid space telescope has moved closer to launch after prime contractor Thales Alenia Space mated the spacecraft’s service module and payload module. Euclid will aim to study the “dark universe” through visible-light and near-infrared astronomy. The mission had been slated to launch no earlier than the first quarter of 2023, but this is now expected to be delayed due to an enforced change of launch vehicle.

Euclid is the latest mission in the European Space Agency’s Cosmic Vision 2015-2025 program. This program encompasses all of ESA’s space science missions and is the successor to the earlier Horizon 2000 and Horizon 2000 Plus programs which previously saw the agency develop and launch the Planck, Herschel, Gaia, Lisa Pathfinder, and BepiColombo missions. 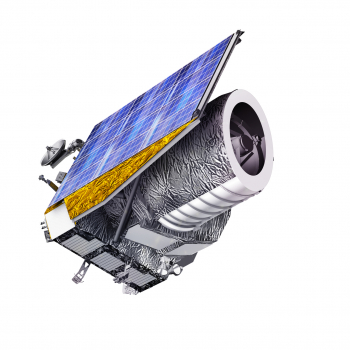 Cosmic Vision was created in 2005 as ESA looked to plan its next tranche of space science missions. Two missions under this program have already been launched: the Characterising Exoplanet Satellite (CHEOPS) in 2019 and Solar Orbiter in 2020. Several further missions are already planned, including the Jupiter Icy Moons Explorer (JUICE), Solar Wind Magnetosphere Ionosphere Link Explorer (SMILE), and the Comet Interceptor.

Euclid will be the second Medium-Class (M-Class) mission under the Cosmic Vision program, after Solar Orbiter. The mission has its origins in two earlier proposals, the Dark Universe Explorer (DUNE) and the Spectroscopic All-Sky Cosmic Explorer (SPACE), which were both submitted in response to the new Cosmic Vision program. Both missions were designed to use similar techniques to study dark energy.

Due to their similarities, the two missions were combined to become the Euclid program, named after the Greek mathematician Euclid of Alexandria. Euclid, who lived around 300 BCE, is considered the founder of the field of geometry. The Euclid spacecraft will help scientists better understand the geometry of our universe.

In 2011, the Euclid mission was selected by ESA’s Science Programme Committee (SPC), along with the Solar Orbiter mission. At the time, Euclid was expected to launch in June 2012.

While the Euclid mission is led by ESA, the project is a collaboration including scientific contributions from organizations in several other countries. These include NASA, who joined the project in January 2013. NASA is contributing a near-infrared instrument as well as 40 scientists to the Euclid Consortium — the team of engineers and scientists formed to plan the mission and analyze the data that the spacecraft will eventually return.

The Euclid spacecraft has been built into two modules: a payload module and a service module. Thales Alenia Space, who are the prime contractor for the mission, began construction of the service module in July 2013. The payload module was contracted to Astrium, now Airbus Defence and Space.

The service module houses critical equipment — including the propulsion, electrical, thermal control, and communications systems — that will be used to support the payload module throughout its mission. It includes a sun shield which will be used to help provide thermal protection and keep the spacecraft’s instruments out of direct sunlight. This shield also incorporates the single solar array which will power Euclid. 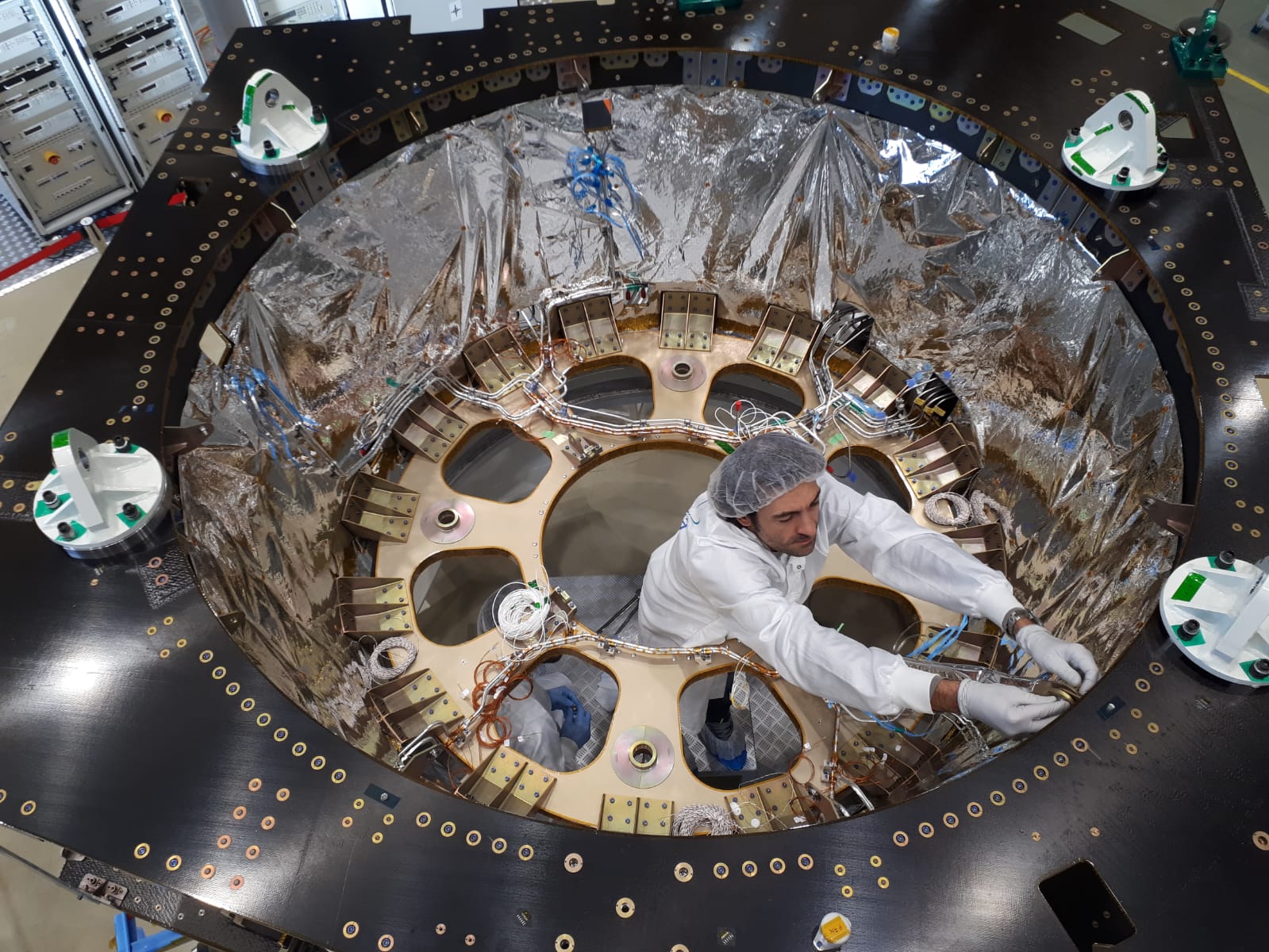 The service module also houses the Attitude and Orbital Control System (AOCS), which will control the orientation of the spacecraft and carry out both the tiny adjustments required for fine pointing and larger high-speed slew motions. Reaction wheels will be used to slew the spacecraft, while a set of twelve micro-newton cold-gas thrusters will be used for precise control, measured by the Fine Guidance Sensor (FGS) on the payload module.

The spacecraft also carries hydrazine thrusters which can be used for maneuvering and orbital adjustments while it is not in science mode.

Sitting on top of the service module, the payload module will house the telescope and two instruments. Euclid features a Korsch-type telescope using three curved and three flat mirrors. A Korsch telescope has a wide field of view, while still providing a sharp image. Euclid’s has an aperture diameter of 1.2 meters.

Light collected by the telescope will be directed to the instruments through a dichroic filter, which will separate the light into visible and near-infrared wavelengths. 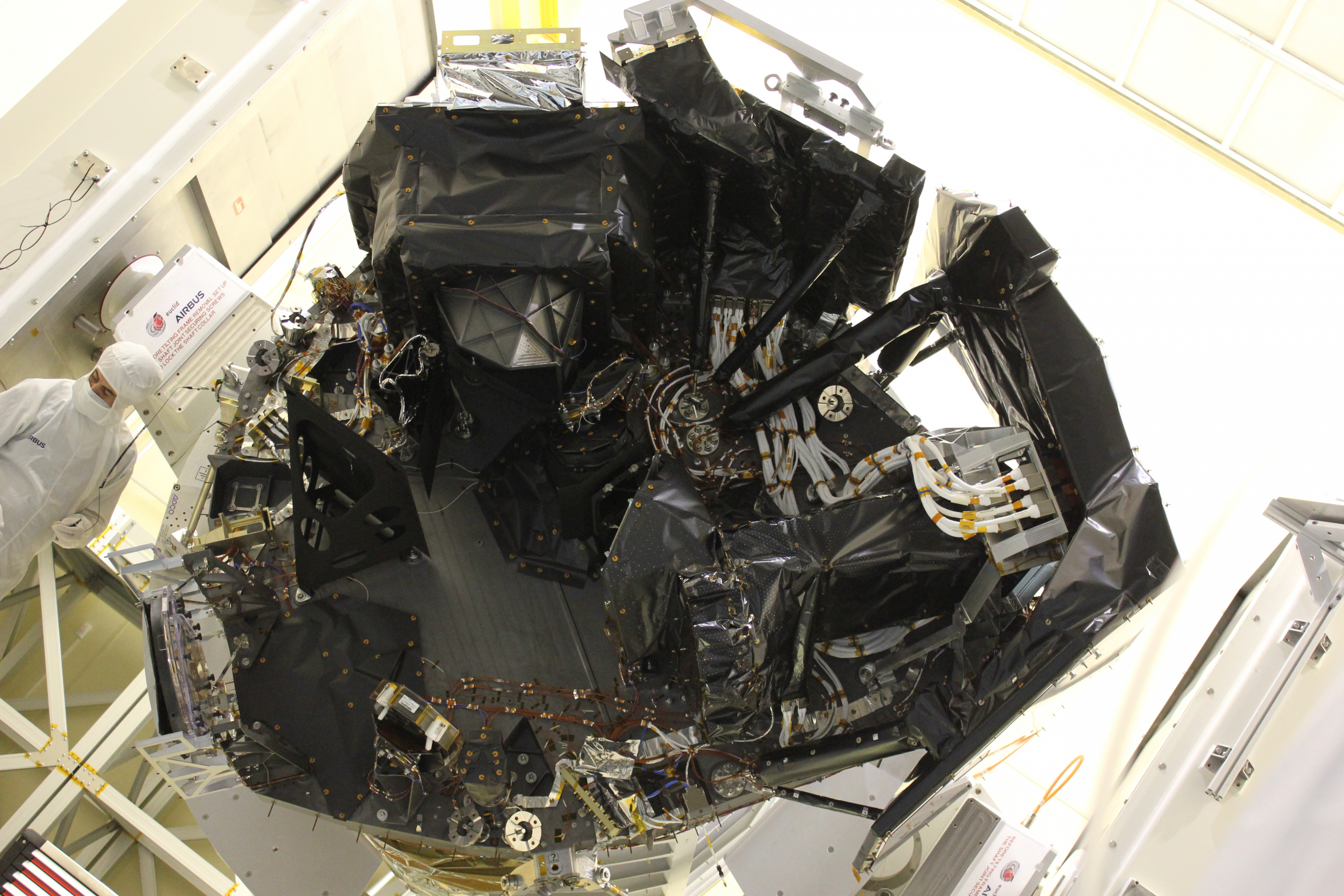 Euclid’s two instruments are the Visible Instrument (VIS), provided by ESA, and NASA’s Near-Infrared Spectrometer and Photometer (NSIP). VIS will be used to take precise measurements of the shapes of galaxies, while NISP will take spectroscopic measurements, splitting the light from a galaxy into individual wavelengths.

The mirrors and detectors for Euclid’s payload module began to be delivered in 2017 and 2018. In December 2018, the critical design review (CDR) was completed, giving the green light for the final assembly stage of the project to begin. July 2019 saw the completion of the NISP instrument, which was then delivered to Airbus. VIS was delivered a year later, with the two instruments integrated into the payload module in December 2020.

In 2021, the payload module was tested in a vacuum chamber, simulating a space-like environment to give engineers and scientists an understanding of how Euclid’s instruments would operate in space. With this complete, the payload module was delivered in late 2021 from France to Turin, Italy, in preparation for its mating with the service module, which had been constructed and undergone its own testing separately.

On March 24, 2022, the two modules were integrated together. Teams from ESA, Airbus, and Thales were there to oversee the integration, with the 800-kilogram payload module lifted onto the service module’s eight connectors, with an accuracy of 50 microns (0.05 mm) required to complete the operation.

Speaking after the integration was complete, Hans Rozemeijer, an engineer responsible for the assembly, integration, and testing of the Euclid spacecraft, said: “It was really exciting to see the spacecraft coming together and get one step closer to seeing the mission become a reality. I almost feel like we have united two family members.”

“We had to make sure that the flatness of the service module closely matched the flatness of the payload module at the connection points to reduce the loads on the telescope as much as possible […] We were targeting a difference of less than 50 microns at every point. It’s not like a piece of Ikea furniture that you can hammer into place – this task required extreme precision!”

With the payload and service modules integrated, Thales will complete construction by attaching the sun shield and high-gain antenna to the spacecraft. Euclid will then undergo further testing as a complete spacecraft before it is transported to the launch site. The finished spacecraft will measure 4.7 meters tall by 3.7 meters wide. Fully fueled, it will have a mass of 2,160 kilograms. 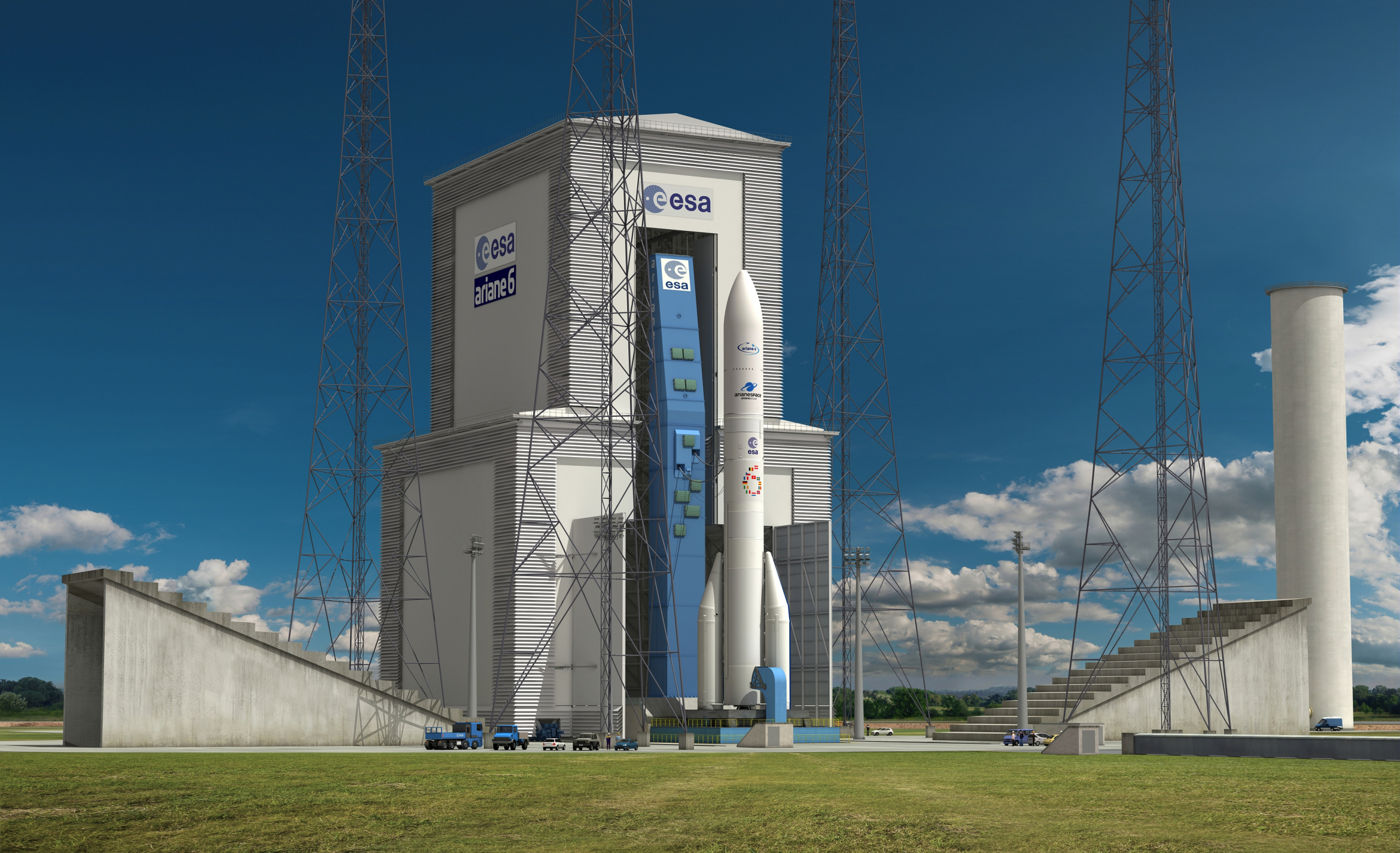 Euclid had been slated for launch in the first quarter of 2023 aboard a Soyuz-STB rocket from Kourou, French Guiana. With Arianespace suspending its partnership with the Russian Federal Space Agency as a result of Russia’s invasion of Ukraine, Soyuz is no longer available as a launch vehicle, and ESA has been forced to look for an alternative.

While no official announcement has yet been made, the Euclid mission is expected to be transferred to Arianespace’s new Ariane 6 rocket, which is currently preparing for its debut mission later this year. The Euclid launch will most likely use the Ariane 62 configuration.

Euclid will be launched towards the L2 Sun-Earth Lagrange Point, where it will join ESA’s Gaia and NASA’s James Webb Space Telescopes. It will take approximately 30 days to make the 1.5-million-kilometer journey to reach L2.

Once at L2 and fully commissioned, Euclid has a planned mission lifespan of six years.

Euclid will create a sky map covering more than a third of the sky, with time as a third dimension. It will look out to galaxies up to 10 billion light-years away, measuring redshifts of up to ~2. Redshift is the increase in the wavelength of light coming from an object that is moving away from the observer. By studying the distance, redshift, and structure of these galaxies, Euclid will aim to find imprints of the dark energy left over from the expanding universe.

The wide and deep surveys made by Euclid will also enable scientists to discover new galaxies and determine more accurately the characteristics of the galaxies that the mission observes. This could be used to plan follow-up observations using other telescopes like James Webb to provide a more in-depth look at points of interest.

The Euclid Wide Survey will cover 15,000 square degrees of the darkest parts of the sky. This wide survey will be the core of the mission, searching for the distortion signals made by dark energy. Three Euclid Deep Field surveys will cover 40 square degrees and will help to calibrate the wide survey data, while also helping to extend the scope of the mission. The deep field surveys will be able to find faint high-redshift objects.

Observations will be carried out in a step-and-stare mode. The two instruments will have time in each area before moving to the next area. Euclid will observe a strip of 10-20 degrees per day, allowing it to cover patches of 400 square degrees every month. Every six months, the telescope will be reoriented to point in the opposite direction so it can survey the other hemisphere.

The Euclid mission will help scientists answer pressing questions about the structure and nature of the universe. While it is currently uncertain when the spacecraft will launch, the recent integration milestones represent an important step on its journey toward space.