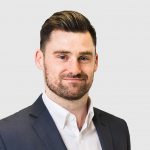 EUR/USD – Can it turn things around?

Or are there bigger falls to come?

The euro is trading lower against the dollar again after a brief rebound late last month. But was the rebound brief or is there more to come?

While the one-hour chart appears to show no shortage of momentum, the latest daily candle appears to indicate some hesitation. That appears to be contradictory, but the fact that this happened so close to the prior lows may be significant.

The question is whether the hesitation near the lows or the momentum on the shorter-timeframe is more significant. It’s hard to ignore either but it should become clear one way or the other, and very soon.

Another failure to break the lows could come on rapidly deteriorating momentum, or a breakout could occur on much more.

Or, we could see a breakaway attempt in the other direction. The first hurdle here is 1.13. A move above here takes us above the descending channel on the one-hour chart, and the 55/89 and 200/233-hour SMA bands.

That would be a strong bullish signal on the hour chart that may generate some upward momentum in the near term and could lead to a broader correction on the longer timeframes.

EUR/USD – Can it turn things around?