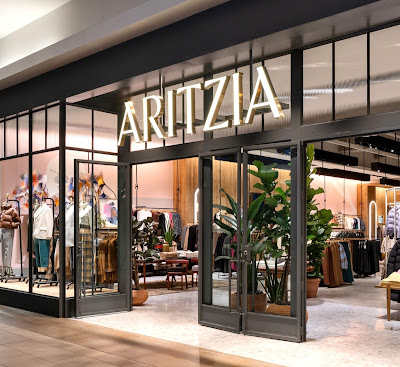 [EXCLUSIVE] At Last, Aritzia to Arrive in Atlanta

ToNeTo Atlanta wondered in 2013 when popular Canadian women's retailer Aritzia might open in Atlanta, and we are pleased to share that the day is coming soon! Permits recently filed with the City of Atlanta indicate that the retailer plans to open a roughly 11,000 square foot store at Lenox Square in Buckhead.

The company plans to spend $1.85 million to convert the space to suit their needs.  The permit filed indicates that Aritzia is opening in suite "2711" which simply does not exist.  That said, the most likely space Aritzia would occupy in the mall is the former TOPSHOP space on the main mall level.
TOPSHOP closed its two-level space at the mall in 2019 and since then it's played host to TFTI, an interactive selfie shop.  The space is currently vacant, with Aritzia likely to take the roughly 11,000 square foot upper level, not the roughly 6,000 square foot plaza level space.  Representatives from Lenox Square, which is currently without local public relations representation, did not respond to our request for comment or confirmation.

Brian Hill opened the first Aritzia in Vancouver, British Columbia in 1984.  Today, there are more than 100 locations between Canada and the U.S.  In addition to Aritizia, the company also operates several in-house brands, some of which operate stand-alone shops in Canada.  These brands include Wilfred, Wilfred Free, Le Fou by Wilfred, TNA, Babaton, The Group by Babaton, Ten by Babaton, Sunday Best, Talula, Main Character, and Community.

The one product the store carries for men and women is their exclusive The Super Puff, a down coat that comes in several versions and ranges from about $200 to about $400.  The Super Puff is available in sizes 3XS up to XL for women and XS up to XL for men.  According to the Aritzia website, many variations of The Super Puff are either sold out online or are available but with "ship dates" well into 2022.

Aritzia also carries a curated selection of products from other brands such as Levi’s Premium, Citizens of Humanity, Salomon, New Balance, and Clarks, among others.  The company's offerings of both in-house and third-party brands have led some to compare Aritzia to a cross between Zara and J.Crew.

According to the Simon website, the Lenox Square Aritzia location would be the first full-line store in its portfolio, joining existing outlets at Toronto Premium Outlets in Halton Hills, Ontario and Woodbury Common Premium Outlets in Central Valley, New York.

The new Atlanta Aritzia will be the second in the southeast for the Canadian retailer, who this past November opened at The Mall at Green Hills, an upscale Nashville mall.

Are you excited for the opening of Aritzia in Atlanta?  Have you ever been to an Aritzia store?  If Aritzia expands in Atlanta, where else would you like to see them open?

[EXCLUSIVE] At Last, Aritzia to Arrive in Atlanta