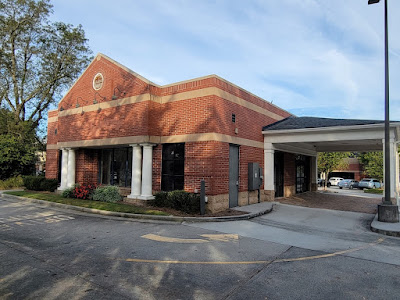 Chipotle Mexican Grill plans to bring their new "Chipotlane" to Dunwoody, according to permits recently filed with the city.  The new location, 1614 Mount Vernon Road in Dunwoody Village, was most recently an outpost of Tide Dry Cleaners, but has sat idle since Tide's 2020 closure.  Tide's Dunwoody location was one of four franchises locally, but all of them - including others in Alpharetta, Duluth and Johns Creek - have closed.   The building and its drop-off/pick-up doors will be converted to suit the needs of the quick-serve burrito joint.

Prior to opening as Tide Dry Cleaners in April 2014, the roughly 2,000 square foot building was a branch of RBC Centura Bank.  Interestingly, according to Google Maps, the drive-thru lane was added by Tide and not present during the building's life as a bank.  Despite the absence of an actual Drive-Thru window, the space was marketed by local real estate firm The Trilogy Group as "restaurant space with drive-thru."

Chipotle's "Chipotlane" is not a traditional drive-thru, but is instead a lane designated for mobile order pickups. (Can you imagine making one, let alone two or three customized Chipotle orders via a drive-thru speaker?)   The first "Chiptotlanes" were piloted in late 2018 with the first opening in metro Atlanta in 2019 when Chipotle converted a former Boston Market in East Cobb.  In the years since, the company added "Chipotlanes" to new locations in Austell, Loganville, Dawsonville, Hiram and Buford, among others.

According to a company release, "Chipotlanes are expected to be included in more than 60% of new Chipotle restaurants."  QSR Magazine did an extensive report earlier this month on the "Chipotlane," something it called called "game-changing."

Have you used a "Chipotlane?"  What is your favorite quick-serve Mexican restaurant?  What kind of restaurant would you most like to see open in Dunwoody?