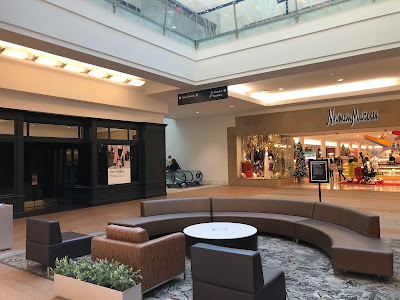 Luxury retailer Gucci is doubling down on Buckhead with plans to open a second store.  Already with a popular boutique in Phipps Plaza, the company intends to open a second store just outside Neiman Marcus at Lenox Square, according to a recently filed permit with the City of Atlanta.  Plans indicate that Gucci will spend an estimated $275,000 to convert the roughly 3,300 square foot former H. Stockton space on the first floor of the Luxury Wing.

A Gucci representative indicated that plans call for the new store to offer a similar yet smaller selection of merchandise than the Phipps Plaza outpost and for it to open in April 2022.  Locally owned H. Stockton closed its Lenox Square boutique last year first after water damage and later due to the uptick in crime at the mall, according to a store associate.

Gucci in late 2018 expanded their boutique at Phipps Plaza from about 5,200 to about 8,200 square feet.  While the addition of a second store in the market is not unheard of, Gucci does likely represent the most upscale brand to have dual representation.  [Louis Vuitton operates a "shop in shop" within Saks Fifth Avenue at Phipps Plaza in addition to their flagship store in the Luxury Wing of Lenox Square.]

Tory Burch added a Lenox location in addition to their Phipps store in 2015, while Sunglass Hut continues to operate a location in Phipps Plaza as well as two in Lenox Square.  Both primary "main mall" locations of Starbucks remain "temporarily closed," while a satellite location within the Macy's at Lenox Square remains open.

Coach, Williams-Sonoma, Gap, and Chick-fil-A, among others, previously closed their Phipps Plaza locations in favor of remaining open at Lenox Square.  Armani Exchange and Abercrombie & Fitch moved from Phipps to Lenox, while Kate Spade and Bally moved from Lenox to Phipps.

Are you surprised to hear that Gucci plans to open a second store in Buckhead?  Have your shopping habits in Buckhead changed over the past year?  Do you think Buckhead City would solve all the challenges Buckhead is currently dealing with?