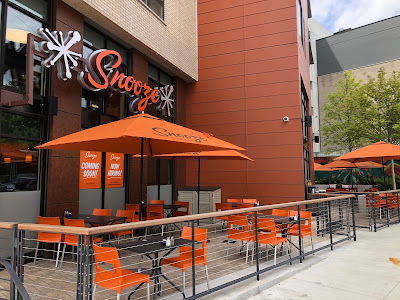 Snooze, an A.M. Eatery, a growing breakfast concept, has leased space for their next two locations in metro Atlanta.  The Denver-based chain made its Atlanta area debut this past January in Sandy Springs and added a second location on the Westside in September.  Now, ToNeTo Atlanta is pleased to confirm that the company is planning additional locations in Midtown and Buford.  Both new locations should open in phases during 2022.

In Midtown, Snooze will open alongside existing anchors Trader Joe's and Landmark's Midtown Art Cinema as well as the upcoming Italian oyster and seafood bar Alici from chef Pat Pascarella and a new location of Yumbii in Midtown Promenade on Monroe Drive.  The breakfast eatery will occupy a roughly 4,000 square foot space in a portion of the old Tuesday Morning.  Charlotte's Asana Partners purchased Midtown Promenade in early 2019 and is in the midst of a significant repositioning of the center that will provide for better access to the Atlanta BeltLine as well as the addition of several new tenants.

Snooze Buford will be part of Fuqua Development's new The Exchange at Gwinnett project along Buford Drive on the opposite side of I-85 as The Mall of Georgia.  The restaurant, which will be similarly sized to other locations in Atlanta, will join existing dining options in the center such as MOD Pizza, Jinya Ramen Bar, Chipotle, Five Guys Burgers & Fries, and Starbucks, among others.  The center itself is anchored by a huge new Rooms to Go combo store, Andretti Indoor Karting & Games, Topgolf and Sprouts Farmers Market.

Several breakfast chains have recently opened or plan to open in metro Atlanta soon.  In addition to Snooze, Louisville-based Biscuit Belly announced plans in October for a franchise group to open at least five locations in the greater metro Atlanta area in the coming years.  Bradenton, Florida-based First Watch went public in September and raised $170 million in the process.  The breakfast chain, which already operates a dozen locations in the greater metro Atlanta area, has its eyes on several new locations including one that is expected to open next year at the new Publix-anchored Perimeter Marketplace in Dunwoody.

Another Broken Egg Cafe late last month debuted their "New South" restaurant redesign at their locations in Dunwoody, Roswell and Vinings, with company CEO Paul Macaluso telling ToNeTo Atlanta that the company also plans to return to Buckhead where they closed over the summer.

Are you excited for the openings of Snooze in Midtown and Buford?  What is your favorite breakfast eatery?  Where else would you like to see Snooze open in metro Atlanta?