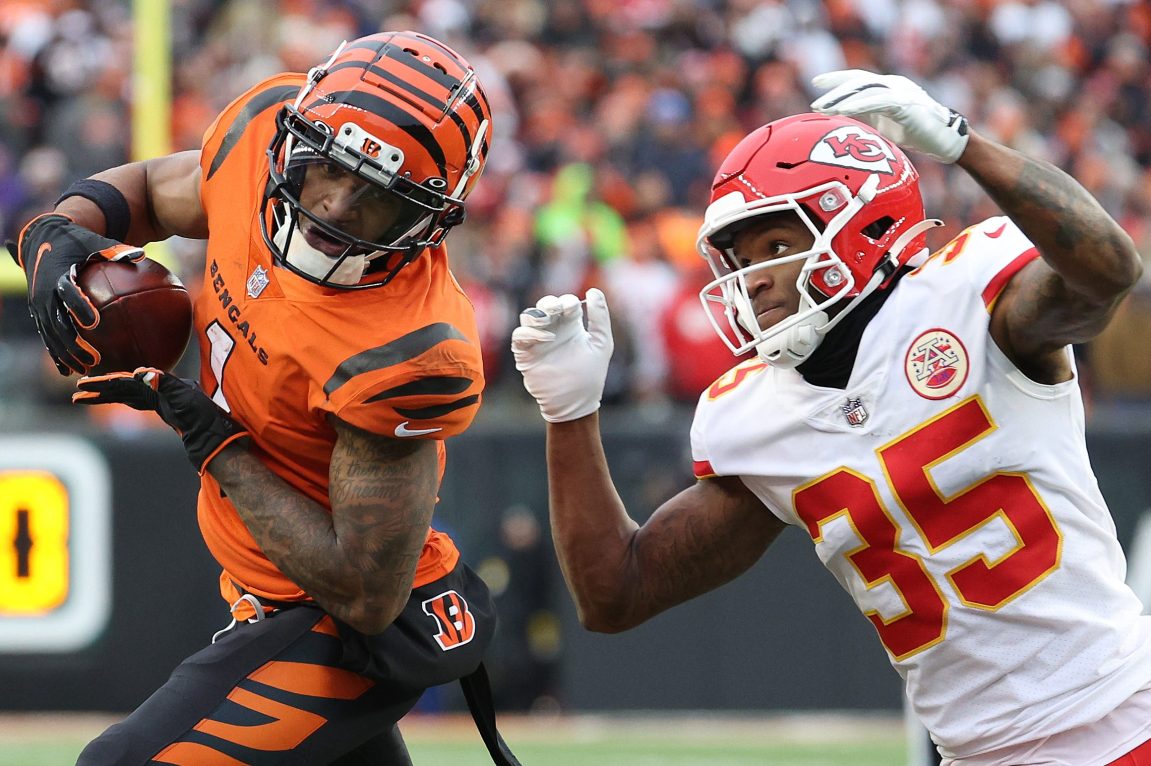 This is NFL Best Bets, a recurring series in which professional sports handicappers lend us their insights and picks for the most intriguing matchups for each week of the football season.

For this edition of Best Bets, Thomas Gable, the director of race and sportsbook at the Borgata Hotel Casino & Spa in Atlantic City and sports betting reporter Josh Appelbaum of VSiN share their opinions on the Bengals taking on Chiefs in Kansas City and the 49ers going to Los Angeles to match up with the Rams.

You’ve got places to go, people to see and possibly some wagers to make, so let’s get to it.

A compelling matchup because … it wasn’t the story of the weekend when these two teams played on the penultimate Sunday of the regular season because of what Antonio Brown did at the Meadowlands, but the Bengals were pretty sensational in upsetting the Chiefs 34-31 in Week 17. Joe Burrow passed for nearly 450 yards and had four touchdowns with no interceptions. Three of those scores went to Ja’Marr Chase, who had 266 receiving yards on the day. Burrow and Chase will need to be better than that if the Bengals are going to have a chance against the Chiefs, who are playing for the chance to go to the Super Bowl at home for the fourth straight season. ‘Nuff said. Cincy’s rookie kicker Evan McPherson has been nails all season, including in last week’s win over the Titans, and if this game somehow comes down to a field goal, he’ll probably make it.

Appelbaum’s Assessment: This line opened with Kansas City listed as a 6.5-point home favorite. The public is happy to lay the points with the Chiefs at home after their instant-classic win over Buffalo. This lopsided betting has pushed Kansas City from -6.5 to -7. Some shops are flirting with a further move to 7.5. The Chiefs will likely be a popular teaser play (-7 to -1), which goes through the key number of 3. At this point, the Bengals offer buy-low value as a road contrarian dog with an inflated line, especially if you can wait it out and pounce on the hook (+7.5). There’s some familiarity here, with the Bengals upsetting the Chiefs in Week 17, winning outright as 3.5-point home dogs. Cincinnati also has a rest advantage, having played on Saturday afternoon while the Chiefs played Sunday night. I’ll wait it out and grab Bengals +7.5.

Gable’s Guess: This is a rematch from Week 17 in Cincinnati. The Chiefs closed as 3.5-point favorites in that game. Now at Arrowhead, the spread is four points higher. I think there’s a definite home-field advantage at Arrowhead for the Chiefs and that explains the difference in the numbers. In Week 17, the Bengal defense was able to contain Tyreek Hill and Travis Kelce. In this one, I think a lot depends on the Kansas City defense. Cincinnati’s offensive line gave up nine sacks to the Titans last week. It was amazing how many times Burrow got hit in that game. There’s no doubt in my mind the Chiefs are the better team here. I am going to lay the seven with the Chiefs, but if it gets to 7.5, I’m not going to do that.

Our Pick: The numbers are big all around here. Take the points and the Bengals or go with the over.

A compelling matchup because … the Rams are looking to become the second team in a row to win the Super Bowl in their home stadium but will first need to win at SoFi Stadium against a team that has beaten them six straight times, including in the final game of the NFL regular season earlier this month. The 49ers have been road warriors thus far in the playoffs and may actually have some home-field advantage despite playing in Los Angeles, as San Francisco fans have been buying tickets to this game in droves. It’s difficult to beat a team three times in a season, as the Saints found out against the Bucs in last year’s playoffs, but the Niners are tough, well-coached and have plenty of postseason experience. The same can be said for LA — and the Rams are also very talented. This game may come down to which quarterback, Jimmy Garoppolo or Matthew Stafford, makes fewer mistakes.

Gable’s Guess: The Niners are a very good road team and they’ve gotten here by winning on the road. Stafford struggled against the Niners this season and threw four interceptions in those two games. But Cooper Kupp played well with 18 receptions, 240 yards and a touchdown in those two games. With Odell Beckham Jr playing well and Stafford showing confidence throwing to him, the Niners won’t be able to just focus on Kupp. In those two games against the Rams, the Niners had 85 rushing attempts and Deebo Samuel had nine receptions for 192 yards and one touchdown to go along with 13 carries for 81 yards and two rushing touchdowns. I’d expect the Niners to continue to try and run the ball. Garoppolo is not going to be airing it out all game. This is going to come down to the Niners’ defense limiting the number of points the Rams put up and maybe limiting the number of possessions they have. Otherwise, they don’t really stand a chance to keep up offensively with LA. I expect this to be more of a defensive struggle with the Niners going all-in on defense. I’m going to take the under.

Our Pick: San Fran’s offense was non-existent last week. Lean with the under here or lay the points with L.A.

Editor’s note: Betting lines fluctuate throughout the week based on injuries, weather reports and other factors such as COVID-19. Make sure to double-check odds before betting.