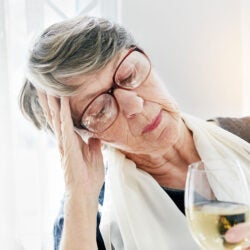 Experts note rise in alcohol use among older adults

As the baby boomer generation moves into retirement age, it is expected that by the year 2034, older adults (ages 65 and up) will outnumber children  in the United States for the first time in history. As the population ages, demand for health care will increase, and rising rates of alcohol use in older adults may create additional challenges to an already burdened health care system.

Trends in alcohol use in older adults

Alcohol use in older adults has been trending upward over the years, particularly among women. One epidemiologic survey determined that in the United States between 2001 and 2013, among people 65 and older, the rate of alcohol use disorder increased 107 percent. The University of Michigan’s 2021 National Poll on Healthy Aging found that although the majority of older adults surveyed were drinking alcohol at low to moderate levels, there was a subset of older adults exceeding the recommended guidelines for alcohol use. In particular, 20 percent of respondents drank alcohol four or more times per week; 27 percent reported having six or more drinks on at least one occasion in the past year; and 7 percent reported alcohol-related blackouts.

Negative effects of alcohol use in older adults

Drinking too much alcohol can have negative physical and mental health consequences, including heart and liver problems, memory issues, mood disorders, as well as an increased risk of cancer and a weakened immune system. In addition, age-related changes in the body place older adults who drink alcohol at additional risk.

This is an excerpt from an article that appears on the Harvard Health Publishing website.

To read the full story

Experts note rise in alcohol use among older adults