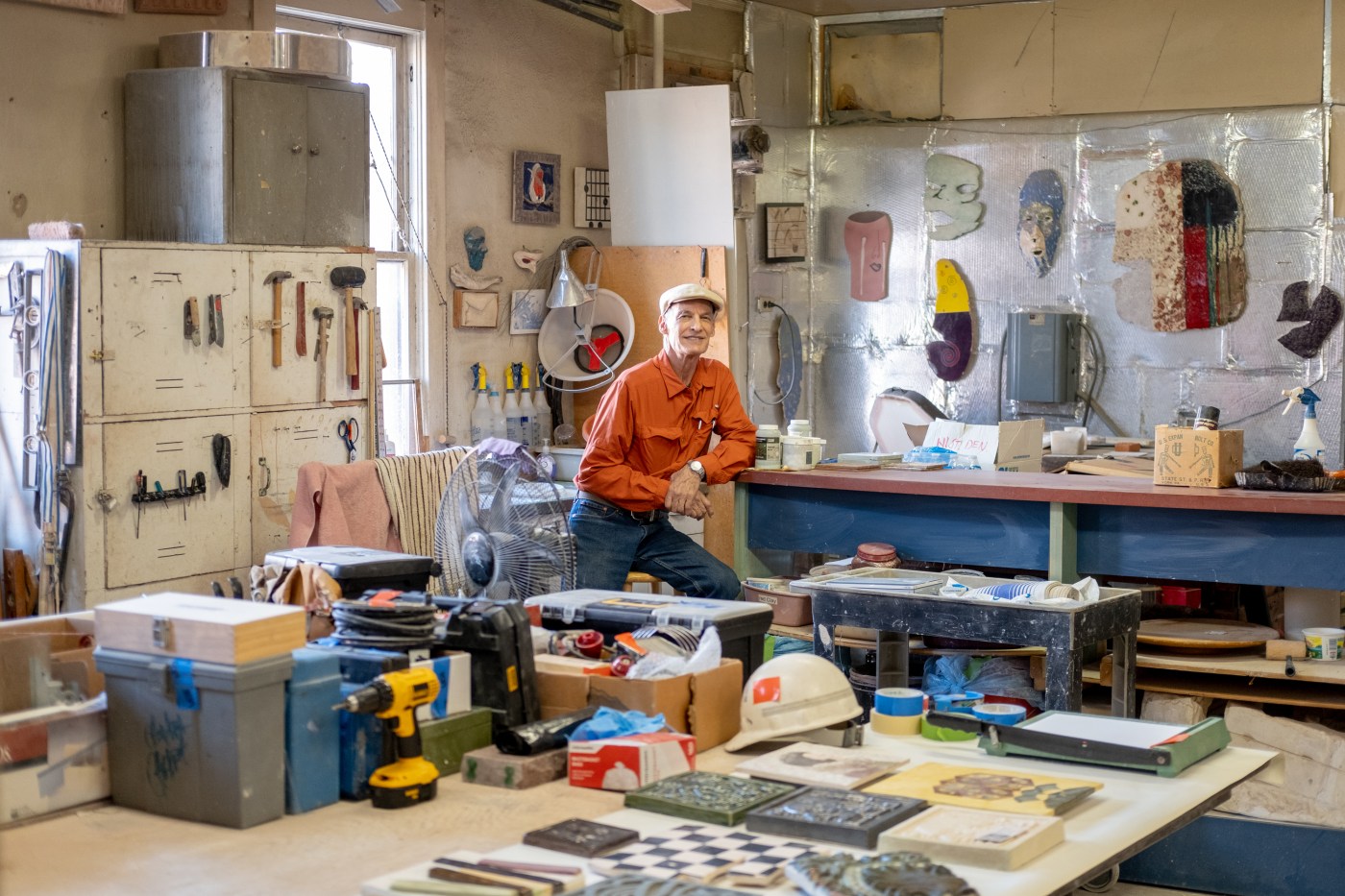 Each year in the city and county of Denver, hundreds of thousands of people stream by Barry Rose’s work, and it’s a safe bet that some of them even stop to contemplate it.

“The most challenging thing is making art that speaks to the community where it’s installed,” said Rose, 70, as he hiked the creaking wooden stairs of his soon-to-be-vacated studio, just off East Colfax Avenue and Logan Street, where he has worked for the past 46 years. “That’s what makes it successful.”

By that measure, Rose is one of the state’s biggest all-time arts successes. Over the decades, his work has provided the visual backdrop for millions of people navigating Denver, such as his iconic book-spine sculpture outside the Denver Public Library main branch. But by the art’s nature, his name is not attached.

But as he was preparing to downsize from his longtime perch in Capitol Hill, where he’s been working in and taking care of the Art in Action Building at 1450 Logan St., since 1975, he’s also reflecting on a career of service.

“You can make up anything you want about my stuff,” he said as bells from the nearby Cathedral Basilica of the Immaculate Conception clanged through an open window. “That’s one way to bring people in.”

Rose’s “stuff” explodes from every corner of his studio. Each surface seems crowded with yellowed sketches, colored tiles, one-off sculptures, kilns, tables and abandoned concepts. Dried globs of paint on the sides of hundreds of tin-plated steel cans splash color from neatly stacked shelves. Oblong foot paths are practically worn into the floor.

“The worst thing that ever happened here was getting broken into, just after we opened,” Rose said below a wall of historic photos and prints. “They didn’t even take anything, just trashed the place.”

Some of the photos in Rose’s sprawling studio show him receiving awards from Denver’s mayors, or standing next to civic boosters such as Henry Lowenstein (Rose designed statuettes for Lowenstein’s namesake theater awards). A Denver native, Rose said he’s proud of having worked on important buildings and parks that he visited while growing up.

This story is part of a project highlighting the many unique individuals across Colorado.

Do you know someone we should know? Tell us about your neighbor, friend or family member who has a story Colorado should hear.

Across his adult life, Rose has also become one of the region’s go-to restorers for terra cotta-accented buildings, such as the 16th Street Mall’s Fontius Building, the Sage Building and the imposing Hirschfeld Press Building. He’s organized or designed large-scale public works projects with dozens of other artists, spanning paint, bronze and stone, in addition to hundreds of personal works and concepts.

Some of his favorites — a mural on Steele Street, for example — have been removed over the years as Denver exploded in size and density. But Rose isn’t precious about his pieces, having internalized the endless cycles of creation, restoration and replacement that keep public art rolling forward.

“I was married to those first few pieces, and then one day, it’s just gone,” he said. “Occasionally they’re stored or moved, but usually they’re torn down. That’s the nature of it. Sometimes they’ll give you a piece that they saved.”

Rose has protested at controversial sites such as the Rocky Flats nuclear weapons plant and contributed to international projects critiquing such weapons and other political hot-button issues, including his own ceramic caricatures of Spiro Agnew and Donald Trump.

He’s also proud of his personal art, which has been displayed inside numerous Colorado galleries over the years (and which he still sells out of his studio), such as themed ceramic paintings that tell stories of enlightenment and coming together.

Rose is far from the young, hungry kid who, skipped college to work on public commissions, he said, first at the University of Washington and then at the University of Colorado. The George Washington High School graduate has by this point been repeatedly lauded and awarded, and has lived long enough to see the city’s public art collection become a marketing tool for tourism boosters. But for most people, his name is still under the radar, and he’s not entirely upset about that.

“I’ve always considered it a privilege to be so lucky,” he said. “Although luck strikes a moving object more readily than a static one.”

Subscribe to our weekly newsletter, In The Know, to get entertainment news sent straight to your inbox.