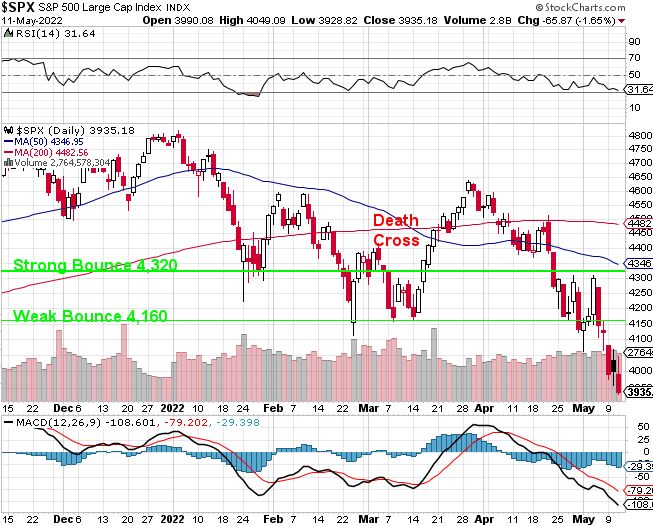 I find it very concerning that volume didn't spike as we crossed 4,000, which indicates there are no bullish buying programs that were triggered at that support – that's what gives you support.  If we consider a simpler approach for Money Managers who aren't cognizant of our 5% Rule™, they would likely be looking for a 20% correction from 4,800, which is our 3,840 line so THAT is where we'd BETTER find support or we will be praying 3,200 holds!

We're a little brave because I'm seeing a lot of stocks that are getting interesting at this point (see yesterday's list) and, whether they sell off further or not, they are still worth buying at this point.  As I said at the start of the week, we are suffering from a lack of catalysts to turn the market around and, sheeple that they are, the TV pundits have suddenly gone negative so now it's non-stop doom and gloom in the Financial Media.  With Bitcoin at $28,000, there's a lot of focus on that and what it means but PSW Members know it means NOTHING! because it's a meaningless made-up currency – just another meme that's blowing up but nothing that reflects on…