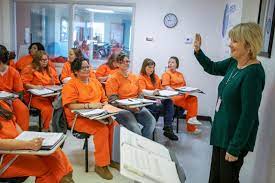 Faith-Based Prisons and Their Teachings about Gender

The following excerpt comes from Brad Stoddard’s book Spiritual Entrepreneurs: Florida’s Faith-Based Prisons and the American Carceral State (Copyright © 2021 by the University of North Carolina Press. Used by permission of the publisher. www.uncpress.org). The book explores the rise of faith-based prisons, what religious teachings they promote, and what such prisons reveal about mass incarceration in the United States.

This excerpt appears in the book’s fifth chapter, “The Conservative Center in Faith- and Character-Based Correctional Institutions.”

The Faith- and Character-Based Correctional Institution (FCBI) dorm for women at Lowell Annex was the first female FCBI that I visited. After I met with the warden, he escorted me to the FCBI dorm, where I met Chaplain Faithe Liburd, the FCBI dorm’s primary administrator. Chaplain Liburd arranged for me to interview several of the incarcerated women, and most of them repeated the aforementioned theories of gender and sexuality without any prompting. 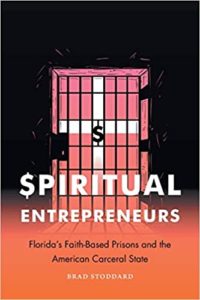 An incarcerated woman named Irene Wilson was the first woman I interviewed. She articulated a history of her childhood and adolescence that, combined with her experiences in prison and in the FCBI dorm, provided a familiar story that many of the women repeated, plus or minus a few details. As such, a detailed summary of her life and of her experience in the FCBI dorm is appropriate. At age fifty-seven, Irene is currently twenty-nine years into her life sentence for first-degree murder. She grew up in a Baptist family, although she did not see her biological parents very often, as both her parents worked multiple jobs to make ends meet. Instead, after school on most days her aunt took her to church, where she spent her evenings. It is not much of a stretch to say she literally grew up in church, and her Baptist faith played a central role in her upbringing. Not only did she spend most of her time in the church, but Sunday’s church services also provided the only chance for Irene to spend more than a few minutes with her mom, who worked as many as five jobs simultaneously.

Irene had a half-brother who lived with her grandma since before Irene was born. They had the same mom, but when their mom remarried, her brother went to live with her grandma, as Irene’s father did not think it appropriate to raise someone else’s son in his house. Irene said “there was a general consensus in the community that it would be wrong for the boy to live with the new family.” Irene’s faith began to be tested at the age of thirteen when three of her brother’s friends first sexually assaulted her. They raped her repeatedly over the next several years, but she did not tell anyone, as her community frowned upon premarital sex and she was embarrassed, ashamed, and fearful that she would be judged. The abuse stopped at age fifteen, but it came with a cost, as the abuse only ended after her brother was shot and killed. Her abusers simply stopped visiting the house. Irene described how she became angry, both because of her abuse and because of her dead brother, and God bore the brunt of her frustration. For the first time in her life, she resented her maker.

Irene finished high school several years later, and at age seventeen she married a man she had dated for two years. A year later she felt like her life was coming back together when she learned she was pregnant, but this optimism was short-lived after her baby son was born with a heart defect and died three days later. Her husband divorced her not long after, and she found herself an abused divorcee with a dead child. She dated the first man who expressed interest in her, but he, too, proved bad for Irene, as he was physically, emotionally, and sexually abusive. Irene recalled, “At first he told me what to wear, where to go, when I could leave the house, etc.” His yelling gave way to pushing which turned into slapping. On multiple occasions he even punched her.

The nadir of their relationship came one night when her boyfriend came home drunk and demanded sex. She told him that she was not in the mood, and unwilling to accept “no” for an answer, he chased her through the house. At some point in his pursuit, he grabbed a knife. He caught up with Irene and grabbed her by her hair, stabbed her in the back, and then bent her over and raped her at knifepoint while she bled from the new wound. This convinced Irene to end the relationship, but over the next several months, her now ex-boyfriend stalked and abused her. One night he found her at a local bar and dragged her outside, where he pinned her against a wall and choked her. She thought he was going to kill her right then and there, but a friend saved her.

She experienced a brief reprieve when he moved to the other side of Florida for a few months. This was a particularly dark period for Irene, as she worked during the days and then spent her evenings at home alone, where she drank excessively. “I didn’t trust nobody,” she said. Determined to get her life back together, she overcame the residual anger she held against God and she sobered up and went back to church. Things started looking better for Irene when her ex returned to town and promised to be the man she had always wanted, so they spent the weekend together. “It was so good,” she said, “I even skipped church.” A month later, however, the optimism faded as her boyfriend started abusing her again. She ended the relationship for good, although the ex-boyfriend continued to stalk her. Afraid that he might try to choke her again or worse, she made the decision she still regrets today—she bought a handgun.

Several days before Christmas in 1986, Irene went shopping to purchase Christmas gifts and then she went to a ball game. On her way home, she decided to stop at a fast food restaurant for dinner. As soon as she stepped out of her car, however, she saw her ex. More importantly, he saw her and, according to Irene, he ran toward her with a deranged look in his eyes. Irene grabbed the gun from her car, which she hoped would scare him. Instead, as Irene recalled, “Me ’n him started tussin’. Next thing I know, it went off.” She fled the scene and later learned that her ex-boyfriend died. The police arrested her the next day, and she has been incarcerated since.

Today, Irene is an esteemed and trusted prison “mom” in the FCBI dorm at Lowell Annex, where she is an informal leader and comforter for the other women. “God loves them,” Irene said; “they’re daughters of the most high and they need to know that. I help them get rooted in God.” She continued, “A lot of these women were mistreated by drug dealers. You know, [they were] raped, abused, [and] prostituted, so I remind them the good news that they get a new body in Christ. There’s no more defilement! They’re new again. I tell them how to have godly relationships with men. I always tell them about Peter and being submissive to their husbands. And that means they need to first find godly men. When you’re submissive to a godly man, you find freedom in Christ.” As this suggests, Irene, who has never had a positive long-term relationship with a man, now teaches other abused women to submit to men. Ironically or not, her god and the men who abused her have similar expectations—they can be distant, they claim that suffering breeds strength, and they demand her submission and obedience.

In summary, Irene not only repeated the all-too-familiar tropes about gender that I learned to expect in the men’s facilities, but she also teaches them to younger women. Perhaps, I thought, she was the exception. Or maybe her positions were the norm? Subsequent interviews quickly confirmed the latter, as the women’s stories predictably contained some combination of sexual abuse, drug abuse, and negative relationships with men. Almost without exception, they also grew up in Christian families (both Protestant and Catholic) and considered themselves Christians when they committed their crimes. They now believe that true Christians do not commit crimes, so they reconcile this contradiction by retroactively denying the religiosity of their former selves. As one woman said, “I used to blame God for the victimization that led to my crimes, but I now realize it was my fault, not God’s. Had I been a better Christian, God wouldn’t have allowed those bad things to happen. God casts a protective umbrella over his true children.” Finally, the women also repeatedly told me that their god wants them to submit to godly men.

My experience in the FCBI dorm at Lowell Annex taught me not only that chaplains and incarcerated leaders in FCBIs teach women that God only sanctions patriarchal gender relations and heterosexual unions but that these ideas are more prevalent in the female facilities. To a certain extent, this is predictable, as the chaplains and the volunteers who teach classes at all FCBIs overwhelmingly mingle in the religious circles that teach and that circulate a core set of religious ideas—including gender submission—and they teach these ideas in various settings, including FCBIs. Incarcerated men in FCBIs learn that they will become heads of households, but women learn to become submissive, and they are also taught how to submit. They have to learn how to trust men, how to obey men, and how to interact with authoritative men—a recipe that has not served many of them well in the past. To break their old selves, the women learn repeatedly through intense socialization to embrace their new gendered ethics.

Interested in more on this topic? Check out episode 13 of the Revealer podcast: “Faith-Based Prisons in the United States” with Brad Stoddard.

The post Faith-Based Prisons and Their Teachings about Gender appeared first on The Revealer.

Faith-Based Prisons and Their Teachings about Gender