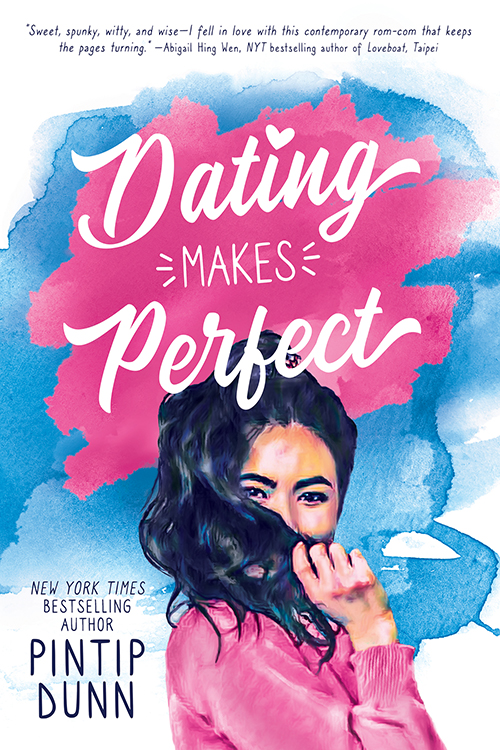 I adore rom-com movies. In fact, for an all-too-brief period, my husband and I had the tradition of celebrating our dating anniversary by watching a rom-com at the theaters. (Lucky for us, our anniversary is Valentine’s Day, so there was no shortage of romantic movies!) We saw My Best Friend’s Wedding on one such anniversary. Shakespeare in Love was another excellent celebration. I loved these movies because at the end of the evening, I always had a smile on my face and warmth in my heart.

So, what better way to pay homage to my favorite movies than to have my heroine Winnie go on fake dates inspired by them?

In my #ownvoices Thai YA rom-com, DATING MAKES PERFECT, the Tech girls have never been allowed to date in high school. However, when Winnie’s twin sisters go to college and their parents ask why they aren’t engaged yet, the sisters rebel and swear that they won’t marry for thirty years, not until they’ve had lots of practice dating. The parents — realizing that their strict rules have backfired — now decide that their youngest daughter, Winnie, must date in high school in order to practice her relationship skills. There are only two catches: They’ll organize the dates (around classic rom-coms)…and choose the boy she’ll be fake dating (who just happens to be her sworn enemy.)

However, the decision to include fake dates inspired by rom-coms stemmed from more than just my desire to honor the genre. First, neither one of the parents have ever dated in America, since they immigrated to the United States already engaged to one another. Thus, their only clue about how Americans dated came from these rom-coms.

Secondly, as Winnie’s mom explains, the movie tie-ins were supposed to remind Winnie — as well as her parents — that these dates were fake.

And finally, from my own perspective as an author, it was downright fun to write scenes inspired from the iconic moments of my favorite movies. The dates featured in this book include:

1) a car ride home from school, because Peter drives Lara Jean around in To All the Boys I’ve Loved Before;

2) a shopping date à la Pretty Woman, where Winnie is given free reign over her mother’s credit card — but Mat must approve her purchases;

3) a stroll around the food stands at the Songkran festival, to mimic the scene in Always Be My Maybe where Marcus and Sasha poke around a farmer’s market;

5) last, but certainly not least, eating pastrami sandwiches at a crowded deli like Harry and Sally in, you guessed it, When Harry Met Sally.

And these aren’t the only movies mentioned. Without giving anything away, the climatic scene of the book involves references to both My Best Friend’s Wedding and Crazy Rich Asians.

The mix of classic rom-coms with new diverse films was deliberate. As much as I love these older movies, I was always intensely aware that they featured white heroines and heroes.

This observation was par for the course. I am a Thai-American girl who grew up in southeast Kansas, where I hardly saw or read about anyone who looked like me — in books, on the television, or in person. Thus, I fully believed that in order for me to achieve my dream of being an author, I would have to write books with white characters.

Fortunately, I was wrong, and the strides the entertainment industry has made over the last few years have been tremendous. To be sure, a lot more needs to be done, but even a few years ago, there was immense pushback about having an Asian girl on a book cover.

That’s why it was so important for me to include To All the Boys I’ve Loved Before, Always Be My Maybe, and Crazy Rich Asians. I adore the Asian representation in these movies. I cried while I was watching Crazy Rich Asians because I couldn’t believe I was seeing all these beautiful actors on the big screen. I watched TATBILB with my daughter, and it was so special for me to see her experiencing something that I never did as a teenager — a mainstream movie with a gorgeous Asian girl as the heroine.

So, my reference to rom-com movies was both a homage to the past — and a hope about where these types of movies will go in the future.

GIVEAWAY: 1 person who comments will win a signed paperback of DATING MAKES PERFECT (domestic only). International winner is allowed so long as Book Depository ships there, with a signed bookplate