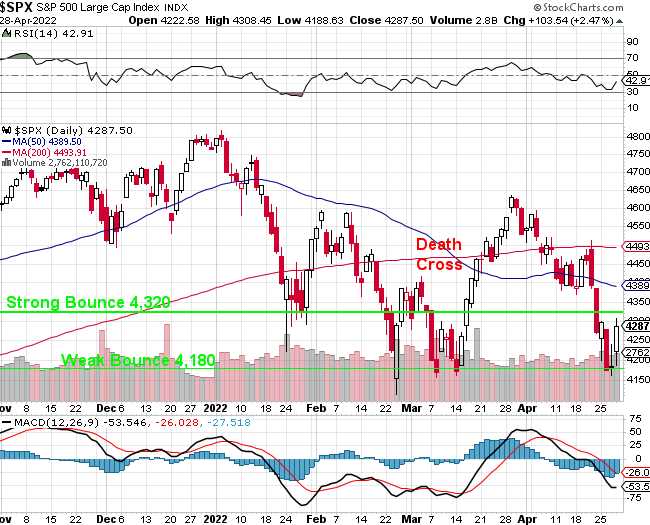 This has gone just as expected.

If not for yesterday's irrational end-of-month window-dressing, we'd be starting at finishing the month at the lows and adding even more hedges than we already did.  That's right, just like that – April is over and it's already May so we're already in the middle of Q2 and the war is still on and there is still rampant inflation and China is still locked down again.  Our GDP was -1.4% for Q1 and, so far, Q2 is not looking much better.

Two consecutive quarters of economic contraction is called a RECESSION – the one they say won't happen until next year.  Well, they can't be more wrong than having it happen in the very first two quarers of 2022, can they?  We'll jump off that bridge when we come to it but, for now, we'll keep buffing up our hedges – as we did in our Alert to Members yesterday.

On the good news front – China is taking their foot off the necks of their Big Tech companies, hoping their recovery will boost their teetering economy.  That's giving companies like BIDU, DIDI and BABA 10-15% boosts in pre-market trading and BABA is another position that's been killing our Long-Term Portfolio (LTP), with 40 long Jan $120 calls that should be back over $20 this morning and hopefully there's a nice short squeeze we can sell covers into.