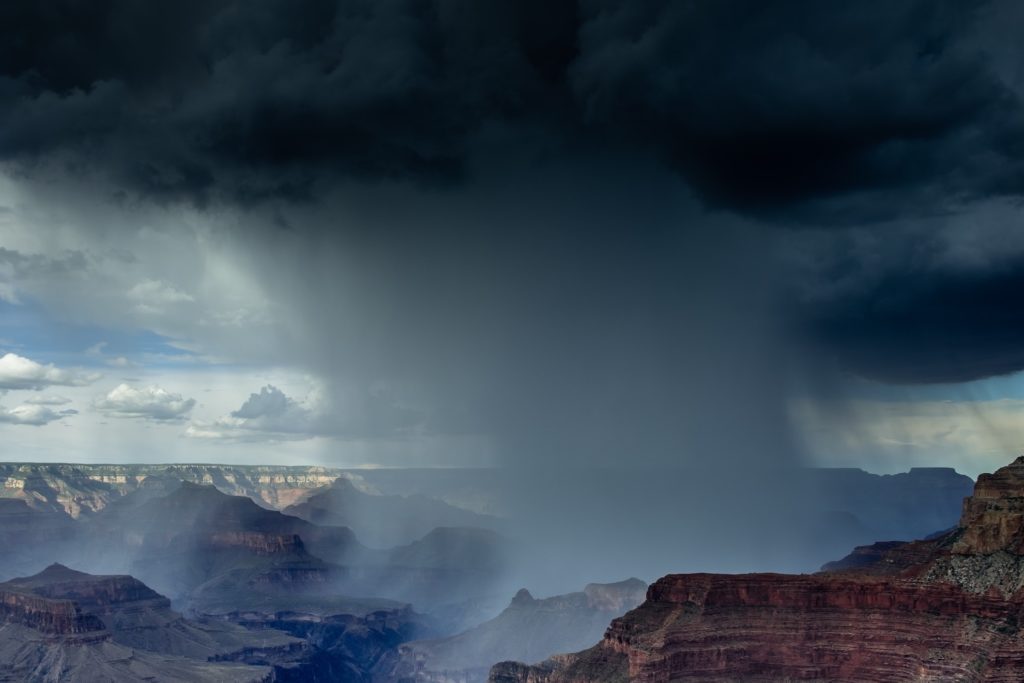 Fear is an inseparable companion of human life. We are afraid of illness and death, poverty and cataclysms, rejection and betrayal, failure and shame. We are afraid of the unknown, so in a sense we are afraid of the future and life itself. Unless we live in the illusory belief that we completely control our own lives and all its circumstances. This, however, will make our fall even greater.

For the first time, the Bible speaks directly about fear in Genesis 3:10: “[Adam] said: I heard the sound of you in the garden, and I was afraid, because I was naked, and I hid myself.” We could call this kind of fear theophobia, or fear of God. Adam hid from God because he knew that he had done wrong in confrontation with the Serpent under the Tree of Knowledge. It is interesting that the same Hebrew word translated in the above verse as “to be afraid” also appears, for example, in Leviticus 19:3, where we read: “Every one of you shall revere his mother and his father.” So, fear has at least two faces – it can be fear caused by guilt and the expected consequences of wrongdoing, but it can also be what we call respect or awe. Other passages in the Bible also speak of fear of danger, of the unknown, of death. Deuteronomy 20:8 adds that fear is contagious and that is why only men who could control “fear of the heart” were to participate in the wars of Israel. Apparently uncontrollable fear deprives us of the ability to face the threat – turns us into cowards.

From these cursory observations we can see that fear can be justified or not, it can perform a positive or negative function. In a sense, fear is a primal instinct that aims to protect us from danger. Pain signals that danger is already upon us, fear that danger is lurking around the corner. Our brain constantly assesses the level of danger in the environment, and it does so in proportion to our past experience. This means that a person living in constant fear and pain has a greater tendency to feel fear and eventually begins to feel fear, even when there is no reason to fear (cf. Ps 53:5). Although, the total absence of fear is also a threat, because then we are deprived of an early warning system. Lack of fear leads to lack of inhibitions, to thoughtlessness, carelessness, sluggishness, and arrogance. Life without fear, like life without pain, would expose us to unidentified dangers. We would not be able to recognize borders crossing of which would cost us dearly. Though the question remains, do we recognize threats properly? Adam in the Garden apparently made a mistake by hiding from God. On the other hand, he did not recognize the threat in talking with the Serpent. This meeting did not awaken him with the right instinct to escape. Fear as an early warning system is not always reliable.

So how are we to live with fear, since we can neither get rid of it and it would not be a good solution to do so? People adopt different strategies in the fight against fear and make various attempts to control it. Probably the most common of these is simply the routine of everyday life that makes us rarely surprised. Customs and routine greatly remove the unknown from experience, and instead bring predictability into our lives. This, in turn, reduces the level of fear without eliminating it completely. However, sometimes we reach for other methods of fighting fear. For example, we create a worldview that is supposed to explain the world in such a way as to eliminate the feeling of fear. For example, Epicurus, asked about fear of the gods and fear of death, stated that the gods are not interested in us in our lifetime, because they have other, better things to do, and after death we are completely disintegrated, so there is no chance that after death we could be judged by them. Conclusion – it makes no sense to fear the gods and judgment, as well as death, since death marks the final end of our existence. Falsifying reality with the help of worldview is a fairly effective method in the fight against fear, however its problem is that it results in detachment from reality and escape into the world of fantasy, which in the end can even lead to schizophrenic behavior.

It also happens that we look for relief from fear by escaping into a state of immaturity – in returning to the blissful years of early childhood, when parents provided us with security and met our needs. Besides, back then we not only had personal bodyguards at our service to give us a sense of security, but we were also characters with magical powers. It was enough to cry or scream, and our servants immediately appeared to soothe the pain and provide satisfaction. However, because such a return to childhood is not possible, that’s why we are looking for “foster parents” in the form of strong personalities, or at least those who give the impression of being omniscient, and thus also omnipotent. We want to base our lives and entrust our future to strong leaders. This, at least partly, explains the phenomenon of support for Hitler and Stalin, as well as the clumping of people into cliques and gangs, and sects. A strong leader is not only a source of security, but also frees us from guilt. For he carries responsibility for our lives, because he also makes the most important decisions for us. When he fails, then he becomes the optimal scapegoat that we can punish for unfulfilled hopes.

It is worth remembering, however, that such “strong personalities” are usually interested in keeping us in a state of anxiety that supposedly only they can relieve, as well as keeping us in a childlike state, because it allows them to play the role of our parents. A dictator can only be surrounded by immature or fearful people. As Hebrews 2:15 reminds us, fear is a very effective tool of enslavement, while Ephesians 4:14 adds that immaturity makes us particularly susceptible to manipulation. Timid people ask for someone to look after them and are ready to give up freedom for a sense of security. This mechanism probably explains the Hebrews’ recurring wish to return to Egypt. In a sentimental retrospective, Pharaoh appeared to them as a good father of the nation – much better than Moses leading them into the unknown amid hardships and shortages.

However, since – as we have stated – fear can have a positive function in our lives, and getting rid of it at all costs is not a good solution, instead of getting rid of fear at all costs it is better to master it, to tame it as much as possible – to use it for good purposes. It is also not about getting rid of fear completely, but about acquiring courage, which is not a lack of fear, but rather facing fear while not giving in to fear. God not only says: Do not be afraid! But also says: Be brave! Show due respect, but do not be enslaved by fear. Complete lack of fear deprives us of the ability to properly assess the situation, and feeding with fear leads to paralysis of life. This means that we have to look fear in the eye, to face it. Then react accordingly. If fear is justified, then it may be worth taking its warnings to heart. If not, then we have to do something with it so that – colloquially speaking – we do not go mad. Not everything that arouses fear is a real threat. And not every fear is proportional to the threat. In addition, there are forces and people in the world who want to fuel our fear precisely so that we are submissive to them, and submissive of our own free will; that we ourselves exchange freedom for security guarantees.

The fight against fear begins with identifying it and its source. Only then can we decompose and tame it. And it can be done only step by step, because “sufficient for the day is its own trouble” (Matt 6:34). We are not able to face too big a fragment of reality at once. Like Israel, who was unable to occupy the whole of the Promised Land in one brilliant military action, but she had to do it bit by bit, little by little (Ex 23:30, Deut 7:22). Who tries to face all his fears at once, usually falls into neurosis. It is worth remembering that the previously used shock therapy usually does not work in the treatment of various types of phobias. The more effective method is just small steps consisting of gradually getting used to the source of fear, and then gradually overcoming it. The dragon in all its glory always looks scary and terrifying. If you want to make a great impression, you must flex your muscles and get puffed up. But the individual parts of the dragon’s body are not as scary as the whole beast. So if someone is afraid of needles, for example, then you should not stick as many needles into his body as possible in the hope of dulling his instincts, but rather you need to start by taming the fear with the mere presence of a needle in his surroundings and in conditions that he is able to control. Here, the help of a person whom the patient can trust and who wants him to stand on his own feet is indispensable. Someone like this introduces an atmosphere of confidence in the face of uncertainty – like a good trainer giving swimming lessons.

Perhaps this is why the apostle Paul, writing about fear and uncertainty, asks rhetorically: “If God is with us, who can be against us?” (Rom 8:31). The awareness that He who watches over our fate is a good, faithful and powerful God who leads us to maturity, helps us face our fears. This does not mean that God saves us from every potentially dangerous situation. Paul continues to list dangers that meet us in life and which fill our hearts with fear: distress, oppression, persecution, hunger, nudity, sword, death, life, heavenly powers, present and future. At the same time, however, he promises that none of them will pull us out of God’s hand – will not separate us from the love of Christ who died and rose for our salvation, to free us from the fear of death. God does not protect us from all threats, he does not spare us any tests of faith, but he leads us through them so that we gain courage and maturity. God does not act like many “strong leaders” who want people to become slavishly addicted by keeping them in a state of emotional immaturity and fear. Rather, He prepares us for responsible life of liberty and discipline, and He does it like a good parent who, on the one hand, does not expose the child to too great a danger (cf. 1 Cor 10:13), but also does not surround him with a tight cocoon isolating him from normal life. For He knows that only by interacting with the real world we grow in courage, strength and wisdom.

Bogumil Jarmulak is pastor of Evangelical Reformed Church (CREC) in Poznan, Poland. His PhD is from Christian Theological Academy in Warsaw, Poland.