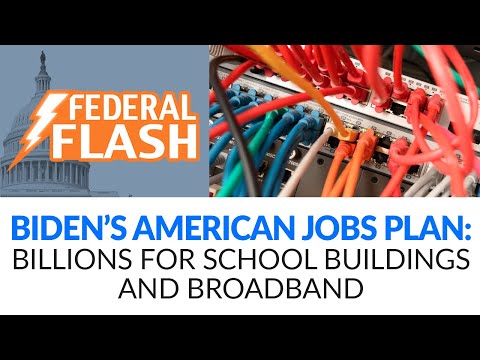 President Biden released his American Jobs Plan, which includes investments in school construction and modernization, childcare facilities, community colleges, and broadband infrastructure. Meanwhile, the U.S. Department of Education issued a first batch of waiver decisions to states related to statewide testing requirements, and the House of Representatives held a hearing on charting a path toward equity in education following the COVID-19 pandemic. Finally, graduation rates reach an all-time high nationally, with the greatest gains among students with disabilities. But will the pandemic wipe out states’ progress?

Last week, President Biden unveiled the American Jobs Plan, a sweeping $2 trillion infrastructure and jobs proposal. Most of the plan focuses on funding for conventional infrastructure projects like improving roads and bridges, including $45 billion to replace all remaining lead pipes and service lines. This will reduce lead exposure in homes, as well as in 400,000 schools and childcare facilities. But the plan goes beyond upgrades to physical infrastructure. It also includes investments, for example, to combat climate change, support the care economy, and provide job training.

Education advocates and lawmakers are cheering significant new funding to support education in the American Jobs Plan. Most notably, President Biden is proposing $100 billion for school construction and modernization. The funding would be split 50–50 between grants and by leveraging bonds, and projects to upgrade health and safety would be prioritized. The plan also provides $12 billion to improve community colleges and $40 billion to upgrade research facilities, with half of that funding reserved for Historically Black Colleges and Universities and other Minority Serving Institutions. Finally, the White House is proposing $25 billion to improve childcare facilities and increase access to high-quality care, especially for infants and toddlers.

Among the education-related proposals in the American Jobs Plan, All4Ed is particularly pleased to see $100 billion to expand high-speed broadband access. If passed, this historic investment would build on the $7.2 billion in emergency funding for the E-Rate program in the American Rescue Plan Act. Altogether, these long overdue investments in internet infrastructure and access will help close the Homework Gap affecting millions of students—and reach universal internet coverage nationwide.

Keep in mind, the American Jobs Plan is, for now, just a plan. It’s up to the House of Representatives to write legislation to pass these proposals—including President Biden’s proposed changes to the corporate tax rate to pay for it. While many Democratic lawmakers have welcomed the American Jobs Plan, the response from Republicans has been tepid at best, making it likely that Democrats will once again use the reconciliation process to pass all, or parts, of the plan with a simple majority.

The U.S. Department of Education made several decisions regarding states’ requests to waive federal assessment requirements under the Every Student Succeeds Act (ESSA) during the pandemic. As a reminder, All4Ed, along with 40 other organizations, has advocated to maintain the requirement for states to give statewide assessments, while recognizing that some flexibility would be needed this year. The Department outlined such an approach in guidance to states in late February, but states have since come forward with plans that go beyond those flexibilities—and have requested waivers as a result.

First, the Department rejected waiver requests from Georgia and South Carolina to cancel statewide tests this year and permit districts to use diagnostic tests or other local assessments instead. Denying these requests is consistent with the agency’s earlier guidance, which indicated the Department was not inviting blanket waivers of ESSA’s assessment requirements.

Second, instead of approving or denying their requests, the Department provided feedback to Oregon and Wisconsin. Oregon, which also proposed to use local assessments instead of statewide tests, was asked to reconsider its request so that its assessment plan included statewide, comparable data. The Department also requested more detail about a survey Oregon will use to assess students’ needs. Wisconsin, which is planning to administer its state test, requested a waiver because it was concerned about reduced participation. The Department informed the state that it does not need a waiver right now, as leaders are making every effort to assess students consistent with federal requirements. The Department may, however, consider a retroactive waiver if the state’s participation rates are extremely low.

Finally, the Department approved Colorado’s request to administer math and reading tests in alternating grades, instead of giving both subjects in grades 3–8, and to give its science test only in grade 8. This means elementary and middle school students will be tested in either math or reading, depending on their grade, unless their family requests for them to take both subjects. High school students will be tested in all three subjects using the SAT. Notably, Colorado’s plan goes beyond the flexibilities outlined in the Department’s prior guidance to states, so additional states may come forward with copycat requests to reduce testing in a similar manner.

Aside from the assessment waivers, the Department also approved several states’ requests for waivers from ESSA’s accountability requirements.

Over on Capitol Hill, the U.S. House Subcommittee on Early Childhood, Elementary, and Secondary Education held a hearing on advancing educational equity, building on lessons learned during COVID-19. Testimony from each of the witnesses, including Marc Morial, President and CEO of the National Urban League, Alberto Carvalho, Superintendent of Miami-Dade County Public Schools, Selene Almazan, Legal Director for the Council of Parent Attorney and Advocates, Inc, and Jennifer Dale, a parent from Lake Oswego, Oregon, can be found on the Committee’s website.

Finally, the National Center for Education Statistics released new data on national and state high school graduation rates. The four-year adjusted cohort graduation rate reached 85.8% in the 2018–19 school year, an increase of 0.5 percentage points and an all-time high. Graduation rates also increased across all racial and ethnic groups, English learners, and low-income students, with students with disabilities seeing the largest gains: 1.1 percentage points. This graduating class, however, was the last cohort before the COVID-19 pandemic disrupted education for millions of students, it is yet to be seen whether the pandemic slows the progress states have made in increasing graduation rates.

This blog post represents a slightly edited transcript of the April 7 episode of Federal Flash, the Alliance for Excellent Education’s (All4Ed’s) video series on important developments in education policy in Washington, DC. The podcast and video versions are embedded below. For an alert when the next episode of Federal Flash is available, email alliance@all4ed.org.

Anne Hyslop is assistant director for policy development and government relations and Ziyu Zhou is a policy analyst at All4Ed.