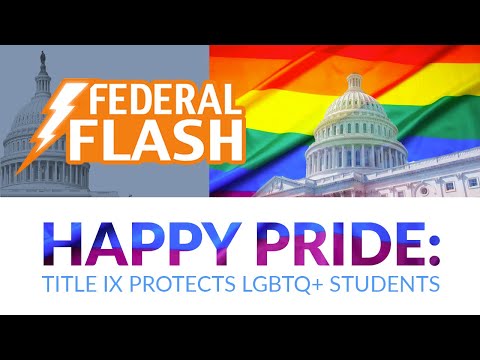 The U.S. Department of Education issued new Title IX guidance protecting transgender students, and the Supreme Court, for now, declined to take up the issue. Plus, the Federal Communications Commission (FCC) opened the application for schools and libraries to apply for $7.2 billion in Emergency Connectivity Funding from the American Rescue Plan. Finally, the Supreme Court ruled that the First Amendment protects students’ off-campus speech, but the limits of those protections remain unclear.

The notice reverses a 2017 decision by former Secretary DeVos to eliminate protections for transgender students implemented during the Obama administration. At All4Ed, we’re thrilled the Biden administration took this step to ensure schools are safe, welcoming, and inclusive of all students, regardless of their sexual orientation or gender identity.

The Department also marked the 49th anniversary of Title IX with a Dear Colleague letter clarifying OCR’s decision to fully enforce Title IX on behalf of transgender students, including links to resources to help states, districts, and schools serve LGBTQ+ students effectively. Additionally, the Departments of Education and Justice released a fact sheet for families and students facing anti-LGBTQ+ harassment in schools with examples of incidents they can investigate.

Meanwhile, in a 7–2 decision, the Supreme Court declined to hear the case of Gavin Grimm, a transgender student who challenged his Virginia school district’s policy prohibiting him from using bathrooms that matched his gender identity. By passing on the case, the lower court’s ruling—which found that the district violated the equal protection clause and Title IX—stands.

“Trans youth deserve to use the bathroom in peace without being humiliated and stigmatized by their own school boards and elected officials.”

Given the number of states passing anti-transgender bills targeting students and youth, however, the issue will likely reappear in the future, at which point the Court may wish to further define whether, and how, Title IX’s ban on sex discrimination in schools applies to gender identity and sexual orientation. We’ll keep you posted.

In other Department news, the agency will miss a Congressional deadline to revamp the application for federal financial aid. As part of the bipartisan COVID-19 relief package passed in December, the Department had to simplify the Free Application for Federal Student Aid, or FAFSA, by the 2023–24 school year. Despite its support for improving student access to financial aid, the Biden administration says it cannot complete the FAFSA overhaul until 2024–25 due to technical limitations in the 45-year-old system. Congress is working toward a bipartisan legislative fix to accommodate the adjusted schedule. Once enacted, the FAFSA should be trimmed from over 100 questions to 36.

Shifting gears, the Federal Communications Commission’s (FCC) application for Emergency Connectivity Funding is now available, alongside FAQs, webinars, and other resources to help schools and libraries apply. As we’ve discussed on Federal Flash before, the American Rescue Plan included $7.2 billion for schools and libraries to buy laptops, hotspots, and broadband for students who’ve been learning remotely during the pandemic. This will help close the Homework Gap for the millions of students—disproportionately low-income students and students of color—who lack sufficient internet and technology at home.

The application is open for 45 days. Eligible schools and libraries may apply for funds to purchase eligible equipment and services between July 1, 2021 and June 30, 2022. Applicants must also certify that all funds will support students and staff who would otherwise lack sufficient internet and technology.

Turning back to the Supreme Court, in an 8–1 decision, Mahanoy Area School District v. B.L. found that schools may only discipline students for off-campus speech if it causes substantial disruption to the school. The case involved a former Pennsylvania high schooler who was suspended from cheerleading for a year after posting a profanity-laden message on social media when she failed to make the varsity squad.

Although the Court ruled that the First Amendment protected her off-campus speech in this case, they didn’t go so far as to rule that districts lack legal authority to regulate all off-campus or online speech. In the majority opinion, Justice Stephen Breyer specifically listed bullying, harassment, and threats as off-campus incidents where schools have a significant interest. However, the precise contours of when, and under what circumstances, schools may regulate students’ online or off-campus speech remain murky and will need to be determined through future cases.

Finally, a few updates from Capitol Hill, where Secretary Cardona testified twice in the last two weeks. First, he appeared before the Senate Appropriations subcommittee to discuss President Biden’s 41% proposed increase for education in the FY22 budget. The hearing focused largely on higher education, including free community college, for-profit colleges, and financial aid. Although the Republican members and Democratic Senator Joe Manchin (D-WV) spoke out against the President’s plan for free community college, they were more open to ideas for expanding Pell grants. Republicans also expressed concerns with the overall funding level proposed.

Next, Secretary Cardona testified before the House Education and Labor Committee on the agency’s top priorities. Unlike the cordial Senate hearing on the budget, this hearing devolved quickly into debates over critical race theory—a 40-year-old theory about American racism studied by legal scholars. Many Republican members expressed considerable concern that the Department of Education is pushing schools to teach critical race theory. Secretary Cardona stressed, as he has in previous hearings, that the Department does not make curriculum decisions for states, districts, or schools.

This blog post represents a slightly edited transcript of the June 30 episode of Federal Flash, the Alliance for Excellent Education’s (All4Ed’s) video series on important developments in education policy in Washington, DC. The podcast and video versions are embedded below. For an alert when the next episode of Federal Flash is available, email alliance@all4ed.org.

Phillip Lovell is associate executive director and Anne Hyslop is director of policy development at All4Ed.