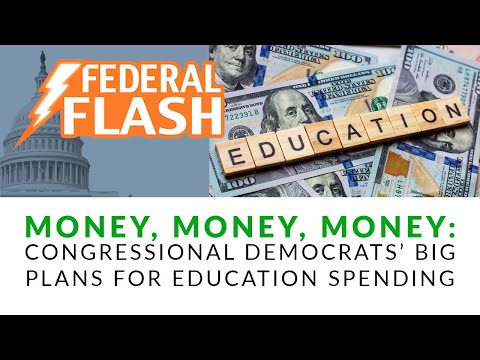 Last week the House Appropriations Committee passed a $65.6 billion K–12 education funding bill for fiscal year (FY) 2022, which begins at the end of September. The 62% increase would significantly boost the federal investment in K–12 education.

In particular, it more than doubles funding for the Title I program to $36 billion, an historic investment in the education of students in high-poverty communities. What’s more, to improve funding equity, the bill would allocate nearly 80% of the new Title I funds through the Targeted Grants and Education Finance Incentive Grants, or EFIG, formulas. Targeted Grants provide greater funding to schools serving high numbers or concentrations of low-income students. EFIG provides additional funding to states based on the equity and effort of their school finance systems. As one of our longstanding priorities, we’re excited by the Committee’s commitment to advancing equity and their proposal to target additional, much-needed federal resources to chronically underserved communities.

To be clear, the Title I increase in the House appropriations bill differs from President Biden’s $20 billion proposal for new “Equity Grants” in his FY2022 budget request that we discussed on a previous Federal Flash. The appropriations bill increases the total funding that flows through the existing Title I formulas, while the Equity Grants would have created a new, and separate, funding mechanism designed to address state and local resource inequities.

Beyond Title I, the appropriations bill also increases funding for special education, educator development, English learners, and the Department’s Office for Civil Rights. Full service community schools would see the most dramatic increase—boosting funding from $30 to $443 million. The Charter School Program, however, sees a slight cut from $440 to $400 million, along with a prohibition on funds supporting charter schools operated by for-profit organizations.

The bill faces considerable opposition from Republicans and a long road before becoming law, especially as any funding bill coming out of the House would need to be reconciled with the Senate. We’ll keep you posted.

Sticking with large spending proposals, Congressional Democrats announced a deal on a $3.5 trillion human infrastructure framework to go along with the bipartisan framework focused on more traditional infrastructure. The deal includes an expansion to the child tax credit, investments to combat climate change, and four additional years of public education. To pay for it, the proposal includes new taxes on corporations and the wealthiest Americans.

This framework builds on proposals put forth in President Biden’s American Families Plan, which we discussed on a previous Federal Flash. We agree with President Biden that 12 years of public education is insufficient to meet the challenges and opportunities of the 21st century, and we’re pleased the framework includes universal pre-K for three-and four-year old children and two years of free community college.

The framework, however, is just a framework at this point—not a full plan or bill. As such, other education-related proposals are on the table, such as funding free school meals for all students and funding to close the Homework Gap and expand access to high-quality broadband.

Once a bill is finalized, Democrats plan to pass it through the reconciliation process to avoid a potential Senate filibuster. Unlike other pieces of legislation requiring 60 votes to end debate, reconciliation bills need only 51 votes, but the bills must pertain to tax and spending. With Democrats having 51 votes only with Vice President Harris breaking the tie, the $3.5 trillion framework will likely need support from all 50 Democratic Senators to have a chance at becoming law. Moreover, the Senate Parliamentarian, a nonpartisan official, must rule whether all of the spending proposals can be included under the reconciliation rules. We’ll keep you posted.

Meanwhile, the Senate Education Committee held a confirmation hearing on three of President Biden’s key nominees to the U.S. Department of Education: Catherine Lhamon to be Assistant Secretary for Civil Rights, Lisa Brown to be General Counsel, and Roberto Rodriguez to be Assistant Secretary for Planning, Evaluation, and Policy Development. While the consideration of Brown and Rodriguez was fairly smooth, Lhamon was far more contentious. Republicans on the committee asked her questions on politically charged topics, including racial discrimination, campus-based sexual assault, and transgender students in school sports. Despite the tough questions, all three appear to be on track for confirmation by the full Senate in the coming months.

Finally, we’d like to remind our readers of the upcoming August 13 application deadline for the FCC’s Emergency Connectivity Funding included in the American Rescue Plan. As we’ve discussed previously, it provides $7.2 billion to increase internet and technology access by helping schools and libraries purchase laptops, wireless hotspots, and broadband.

We’re hosting a webinar for district and school leaders about the Emergency Connectivity Funding program on Thursday, July 22 at 2:30 pm EDT. The webinar will feature guests from the FCC and will cover the program, how funding may be used, and the application process. Register and watch here.

This blog post represents a slightly edited transcript of the July 20 episode of Federal Flash, the Alliance for Excellent Education’s (All4Ed’s) video series on important developments in education policy in Washington, DC. The podcast and video versions are embedded below. For an alert when the next episode of Federal Flash is available, email alliance@all4ed.org.