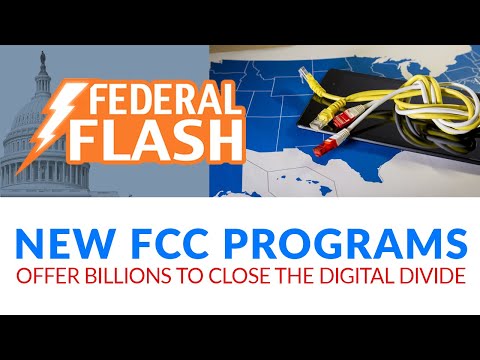 Two big announcements from the Federal Communications Commission (FCC). First, the Emergency Broadband Benefit Program opens May 12 to provide eligible, high-poverty households with discounts on monthly broadband service costs, as well as a one-time discount to purchase a computer or tablet. Also, proposed regulations for spending the emergency $7.2 billion investment under the American Rescue Plan to help schools and libraries purchase broadband and connected devices. And in other administration news, we cover Secretary Cardona’s testimony about President Biden’s FY2022 education budget request and an update on nominations to key positions at the Department of Education.

The COVID-19 pandemic exposed and worsened inequitable access to high-speed home internet and connected devices. To help address this problem, the FCC is opening the Emergency Broadband Benefit Program on May 12. The program was authorized by Congress last year in a coronavirus relief package. It provides federal funds to low-income households to help pay for monthly broadband services and a connected computer or tablet. Households are eligible if at least one member meets the eligibility requirements, including if a child is eligible for free and reduced-price school lunch.

Eligible households can sign up at GetEmergencyBroadband.org. Participants receive up to $50 off their monthly broadband service bill. These discounts increase to $75 per month for households on Tribal lands. Additionally, participants can receive up to $100 toward a one-time purchase of a computer or tablet if they contribute between $10 and $50.

That’s not all the FCC’s been doing to close the digital divide. As we discussed previously on Federal Flash, the American Rescue Plan includes $7.2 billion in one-time, emergency funding to help schools and libraries in low-income communities close the Homework Gap affecting millions of students.

To distribute these Emergency Connectivity Funds, the law requires the FCC to issue regulations by May 10. In a somewhat unusual move, Acting Commissioner Jessica Rosenworcel released a preview of the proposed regulations to the public—setting off a flurry of last-minute jockeying as stakeholders try to influence the final order.

The agency’s proposal would permit funds to be used retroactively to first reimburse districts for purchases made between July 1, 2020 and April 30, 2021, with a second window (if there’s remaining funding) to reimburse future purchases. Qualified purchases would include laptops, tablets, Wi-Fi hotspots, modems, and routers, but not smart phones or desktop computers. The draft order also proposes a maximum reimbursement of $400 for laptops and tablets and $250 for Wi-Fi hotspots. Although it didn’t propose a cap on reimbursements for broadband service plans, the FCC expects those will be made under bulk purchasing agreements, with costs of $10 to $25 per month.

With the FCC currently standing at four commissioners, Rosenworcel needs bipartisan support to enact the rule.

Shifting gears, Secretary of Education Miguel Cardona testified before the House Appropriations Subcommittee on President Biden’s FY 2022 budget request for the Department of Education, which would increase the agency’s budget by 41% to nearly $103 billion.

Republicans balked at the proposed increase, with Ranking Member Tom Cole (R-OK) calling it “unnecessary, irresponsible and unacceptable.” Cole did, however, signal he was open to some of the administration’s ideas, such as an increase in special education funding.

Secretary Cardona argued the proposed investments are needed to meet the unprecedented challenges caused by the pandemic and to reopen schools, as well as to address the significant, systemic inequities in our education system. While progress has been made returning students to in-person instruction, Secretary Cardona made some of his strongest statements to date about the urgency of getting students back in the classroom:

The best equity lever we have is in-person learning now. Not the fall, now. And we need to do everything to get our students in. Every day that they’re not in the classroom is a day wasted to have social-emotional engagement, to have that access to a teacher, a caring school environment…. we know students are suffering due to the trauma that they’ve experienced. They need to be in the classroom.”

Despite the hearing’s stated focus on the budget, members frequently raised other issues. For example, several Republicans accused the Department of using grant funds to push districts to adapt their civics education to incorporate the 1619 Project. In response, Secretary Cardona assured members that curricular decisions are made locally and in collaboration with the community, and reiterated that the Department does not—and cannot—mandate curriculum.

With the President’s request as a guide, Congress will continue the appropriations process in the coming weeks. To pass a budget, however, the bill needs bipartisan support. If Democrats and Republicans cannot find common ground, it’s likely Congress will pass a continuing resolution, leaving the Department to work with last year’s budget.

New Leaders at the Department of Education

Finally, President Biden announced a handful of appointments to leadership roles at the Department of Education, including James Kvaal as Under Secretary, Roberto Rodriquez for Assistant Secretary of Planning, Evaluation, and Policy Development, Richard Cordray as Chief Operating Officer of Federal Student Aid, and former Florida Congresswoman Gwen Graham as Assistant Secretary for Legislation and Congressional Affairs. Kvaal and Rodriguez both served as advisors in the Obama White House, and Cordray was the first director of the Consumer Financial Protection Bureau. Rodriguez has also been an All4Ed board member since 2018.

Kvaal and Cindy Marten, the nominee for Deputy Secretary, are awaiting confirmation votes by the full Senate, while Rodriguez and Graham still need to appear before the education committee. Several other key roles remain unfilled, including the Assistant Secretary for Elementary and Secondary Education.

This blog post represents a slightly edited transcript of the May 10 episode of Federal Flash, the Alliance for Excellent Education’s (All4Ed’s) video series on important developments in education policy in Washington, DC. The podcast and video versions are embedded below. For an alert when the next episode of Federal Flash is available, email alliance@all4ed.org.