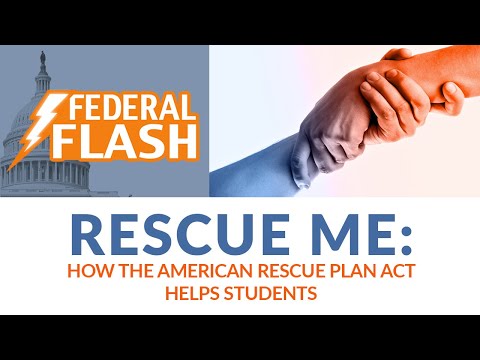 The $1.9 trillion American Rescue Plan Act is headed to President Biden’s desk, including much-needed investments in K–12 education and a groundbreaking change to the federal child tax credit. Plus, President Biden issued a new executive order guarding against discrimination on the basis of sex, gender identity, or sexual orientation, and the U.S. Department of Agriculture takes steps to provide free school meals for all students through the end of summer.

As the Alliance for Excellent Education’s (All4Ed’s) President and CEO Deborah Delisle put it, “Washington is finally stepping up in support of our children. The Rescue Plan Act is the most important piece of legislation for education since the COVID-19 pandemic shuttered schools twelve months ago and offers the relief that schools need to begin helping all students, particularly the most vulnerable, recover from this crisis.”

To do that, the act invests more than $123 billion in K–12 students, and an additional $3 billion specifically for students with disabilities. Like past COVID relief, funds will be allocated to states and districts based on their relative share of Title I funding. But, unlike past COVID aid, states and districts are required to set aside funds for specific activities.

States must reserve 5 percent of funds to address learning loss, 1 percent for summer enrichment programs, and 1 percent for comprehensive afterschool programs. We’re especially pleased to see an $800 million set-aside to support homeless youth, thanks to a bipartisan amendment to the final bill. Only 18 percent of school district homeless liaisons reported that funds from the Coronavirus Aid, Relief, and Economic Security (CARES) Act were used to support homeless children. Dedicated funding from the American Rescue Plan will help states better identify students experiencing homelessness and provide them with critical services.

Most of the K–12 funding a state receives from the American Rescue Plan will go to school districts. But unlike past federal relief, at least 20 percent of district funds must address students’ learning loss. These interventions must be evidence-based and designed to address students’ academic, social, and emotional needs. As a condition of receiving funds, school districts will have thirty days to publish their plans to return safely to in-person instruction.

Another welcome addition is maintenance of equity. This critical fiscal protection, which All4Ed supported, guards against the kind of disproportionate cuts to state education budgets we saw during the Great Recession that more than tripled funding gaps between low- and high-poverty districts. Maintenance of equity will prohibit states from making greater per-pupil funding cuts to high-poverty school districts than to other school districts.

Finally, the act includes a priority we’ve long pushed: $7.2 billion in new funding for E-rate to help close the homework gap affecting 17 million children. This one-time, emergency funding will increase the reach of the E-rate program and provide millions of students with high-speed home internet access and devices to support remote learning.

The American Rescue Plan Act didn’t garner support from any Republican members of Congress—despite the fact that the new law is estimated to cut childhood poverty in half. The act does so, in large part, by making child tax credit benefits more generous and fully refundable. This year, a family can receive $3,600 for each child under age six, and $3,000 for each child ages six to seventeen. The vast majority of American children and families qualify, although benefits phase out gradually for individuals earning more than $75,000 annually and for couples jointly earning more than $150,000 a year. Families could start seeing these payments as soon as the summer, rather than having to wait until they file taxes.

Speaking of summer, the U.S. Department of Agriculture has extended key pandemic-related flexibilities for schools through September. As we’ve covered before, these waivers enable schools to provide free meals to all students, regardless of income, during the pandemic. Meals also can be provided outside of typical times and locations, and families can pick up meals for multiple days on behalf of their students. Given the troubling rise in childhood hunger during the pandemic, extending these waivers is a no-brainer to ensure students’ basic needs are met.

The U.S. Department of Education (ED) also has been busy. Earlier this week, President Biden issued an executive order to ensure safe learning environments free from discrimination on the basis of sex, sexual orientation, and gender identity. Under the order, Education Secretary Miguel Cardona will review the May 2020 Title IX rule released by then Secretary DeVos, which raised the evidentiary threshold in sexual harassment and assault cases in schools and institutions of higher education. That rule was widely criticized by advocates for sexual assault survivors. As a result of the order, it seems likely that ED will either revise the rule or issue a new one to ensure students are protected against sex-based discrimination.

Finally, as we discussed on our last Federal Flash, ED again is permitting states to waive all federal accountability requirements this year. In addition to guidance published in February, ED just released the waiver application template. However, the template does not address changes states may be planning for their statewide assessment systems. We’ve joined with more than forty other organizations in urging ED to maintain the assessment requirements found in the Every Student Succeeds Act and not allow states to replace statewide tests with local assessments, or to assess only a subset of students.

Anne Hyslop is assistant director for policy development and government relations at All4Ed.