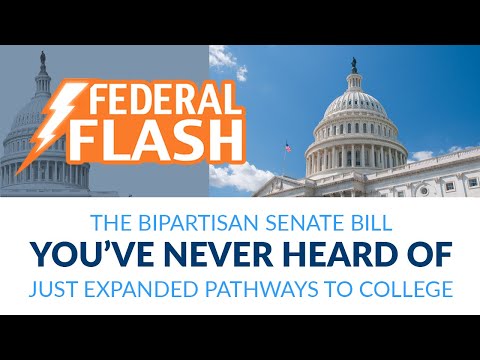 The U.S. Senate passed a bipartisan global competitiveness bill that includes new grants to expand science, technology, engineering, and math (STEM) pathways allowing students to earn college credit or an industry credential while in high school. Plus, the U.S. Department of Education published guidance on Maintenance of Equity in spending American Rescue Plan funds, launched an Education Equity Summit series, and issued a request for information on school discipline policies that could lead to new guidance and civil rights enforcement.

The U.S. Innovation and Competition Act

Last week, the U.S. Senate passed the bipartisan U.S. Innovation and Competition Act, previously known as the Endless Frontier Act. The roughly $250 billion package—designed to increase American global competitiveness—makes major investments in science and technology, but flew under the radar amid ongoing negotiations over infrastructure. A key goal of the bill is to increase the number of American students attaining college credentials in STEM. While the bill did not expand Pell Grant eligibility to short-term programs, it did include funding for state grants to expand college and career pathways by providing high school students opportunities to gain college credit or an industry credential in STEM courses.

This STEM pathways program is similar to the Fast Track to and Through College Act that we discussed on a previous Federal Flash. Each STEM pathway would offer at least 12 credits toward an associate degree or a recognized industry credential. And critically, all pathway courses must count not only toward high school graduation, but also transfer to the state’s public colleges and universities.

“This bill will help keep America competitive with other countries for years to come by encouraging more students, particularly low-income and first-generation college students, to complete a higher education degree.”

But first, the House of Representatives must vote on the U.S. Innovation and Competition Act. If it passes without significant changes, the bill would then head to the White House for President Biden’s signature.

Switching gears, the U.S. Department of Education released new guidance on the Maintenance of Equity requirement for Elementary and Secondary School Emergency Relief (ESSER) funds included as a part of the American Rescue Plan (ARP). As a condition of receiving funds, states and districts may not disproportionately cut funding for high-poverty, high-need schools. Given that these districts and schools often bore the brunt of spending cuts during the Great Recession, we joined with a number of civil rights and other education advocates to strongly support the Maintenance of Equity requirement.

The guidance provides much-needed clarity to states in meeting the new requirement. For example, it specifies capital outlays and debt services are excluded as funding sources. It also provides examples of how states identify “high-need districts.” First, districts are rank ordered according to their percentage of economically disadvantaged students using the Census Bureau’s Small Area Income and Poverty Estimates (SAIPE) percentage. Because special districts lacking geographic boundaries, like charter school districts, may not have Census data, the guidance clarifies states can use the same data they use for Title I funding in those cases. Next, states calculate the number of students equal to 50% of their total enrollment. Finally, states identify—beginning with their highest-poverty districts—those districts that account for half of the state’s total enrollment. States use the same process to identify their “highest-poverty districts,” except that they account for just 20% of the state’s enrollment.

Districts are also subject to Maintenance of Equity. They cannot disproportionately reduce combined state and local per-pupil funding in “high-poverty schools,” nor disproportionately cut the number of full-time equivalent (FTE) staff per pupil in those schools. The guidance supports districts in identifying their schools in the highest poverty quartile that qualify as “high-poverty schools” and determining whether maintenance of equity was met. For example, it clarifies districts can use the same poverty data they already use to determine Title I school eligibility. Districts can also rank order schools districtwide, or by grade span. This can support the identification of high-poverty middle and high schools.

When it released the guidance, the Department also announced a new Education Equity Summit Series to address inequities created and exacerbated by the pandemic. The first session will be held virtually on June 22, 2021 and feature Secretary Cardona, Deputy Secretary Cindy Marten, and a number of education leaders from across the country. It will focus on school reopening and how schools can better listen to the perspectives and meet the needs of underserved students. If you’re interested in participating in the event, you can register here.

In other Department news, the Office for Civil Rights (OCR) released a Request for Information on data, research, and suggestions regarding discipline in K-12 schools. As a reminder, in 2018, then-Secretary DeVos rescinded school discipline guidance developed during the Obama administration. Since then, Democratic lawmakers and civil rights advocates have continued to call for school discipline reform. For example, Representative Donald McEachin (D-VA) and Senator Chris Murphy (D-CT) recently reintroduced the Protecting Students in Schools Act which would prohibit corporal punishment in schools receiving federal funds—a practice still permitted in 19 states. And during the presidential transition, restoring, and improving, the Obama-era discipline guidance was a top priority for many civil rights advocates.

The Request for Information is likely the first step in doing so. OCR is seeking public comments through July 23, 2021 to inform its policy guidance, technical assistance, and other resources to improve school climate and safety and to enforce civil rights laws. Comments may be submitted online through the federal eRulemaking portal.

This blog post represents a slightly edited transcript of the June 15 episode of Federal Flash, the Alliance for Excellent Education’s (All4Ed’s) video series on important developments in education policy in Washington, DC. The podcast and video versions are embedded below. For an alert when the next episode of Federal Flash is available, email alliance@all4ed.org.