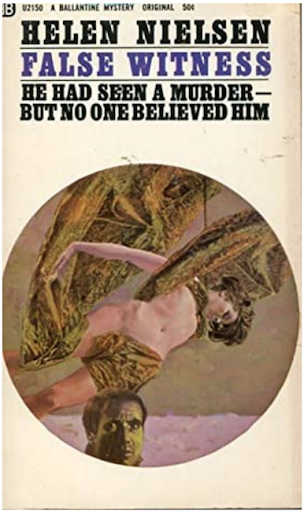 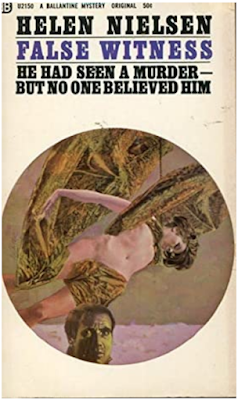 Publishing executive Markham Grant has been sent to Norway to secure the rights to the memoir of renowned resistance fighter Tor Holberg.  While riding a funicular up to a well known tourist spot in Bergen he witnesses a woman being strangled in the train that is descending on the opposite side of the tracks. But when he and a fellow tourist, Ruth Atkins, investigate no body is found. The woman seems to have vanished.  This bit of amateur sleuthing makes them late catching their cruise ship and it leaves without them.  Luckily, a local named Sundequist they met on board the cruise ship comes to their rescue and gives them temporary lodging at the nearby home of his friend Dr. Bjornsen. That evening Grant and Ruth meet Sundequist's artist niece and Grant is astonished.  She is the woman he saw strangled on the funicular!

In the new reprint of False Witness (1959) from Stark House Press Curt Evans rightly brings up Agatha Christie's classic Miss Marple detective novel The 4:50 from Paddington (aka What Mrs. McGillicuddy Saw!) with its similar eyewitness account of a strangling in a train on parallel tracks and the subsequent disappearing body. But Nielsen is not so much interested in the mystery of who the woman is and why she looks like Sigrid...or is it the other way around? This story is no real murder mystery.  Rather, it is a clever amalgam of psychological mystery and suspense thriller. False Witness owes less to detective novels of the Golden Age (something Nielsen indeed knows a thing or two about), but more to Alfred Hitchcock and his favorite trope of the pursuit thriller spiced up with espionage. The novel is rife with Hitchcockian details like a Macguffin (Tor Holberg's memoir), doppelgängers, dual identities, and even some questionable supernatural elements with a dash of hypnotism thrown in for good measure.  I would also mention that this novel is a cousin to The Manchurian Candidate by Richard Condon, coincidentally also published in 1959, while also hearkening back to Sax Rohmer's early Fu Manchu novels of the 1910s.  For what lies at the heart of False Witness is an intriguing idea about mind control that seems decades ahead of itself.

False Witness is also highly unusual for Nielsen, known for her gritty realism, because it dares to address the occult and extrasensory perception.  Clairvoyance and déjà vu permeate this quasi-supernatural thriller.  Grant has more visions while staying at the Bjornsen’s home.  Viewing a painting of a ruined church for the first time oddly brings back a rush of memories.  Wearing the borrowed clothes of Sigrid's dead husband makes Grant feel like someone other than himself.  The more time he spends with Sigrid the more his visions and sense of déjà vu rapidly increase. Nielsen does an effective job of making it seem like Grant is losing control of his mental faculties and that something eerie is happening to him and the people he interacts with.  But you can rest assured that there is something altogether more sinister at work here.  While the motives may appear diabolical, the villains at the heart of the devilry are entirely mortal. 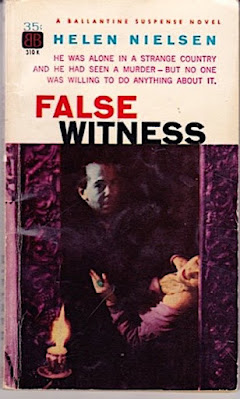 In exploring alternate realities and other worldly dimensions Nielsen seems to have become more self-conscious of her writing. The dialogue is teeming with a kind of Wildean epigrammatic speech with snippets like "Someday is nothing but a delayed now" and "The heart remains loyal; the mind forgets."  An abundance of this kind of talk can ruin the serious mood with unintended hokey humor, but Nielsen shows restraint and manages to make it seem natural.  I particularly admired her prowess in creating an unusually speedy intimacy between the leads. Sigrid makes a fire, takes Markham Grant's wet shoes and clothes from him. While he warms himself she gives him her husband's robe and slippers. They look at her paintings and talk about their lives. Soon Sigrid finds herself divulging her hidden life to Grant almost instantly. It's as if she creates a new Carl, her dead husband, in the person of Grant and uses him as her confessor. The intimacy flows naturally and allows for some nice poetic touches.

The novel does not turn into a sentimental romance thankfully.  Cary Bryan, the “freeloading American” as Ruth calls him, intrudes.  Bryan has been making a living as a cheap guide for English speaking tourists ignorant of Norwegian language and customs.  And he keeps appearing in the most unlikely settings leading Grant to believe he is being followed. Bryan is often wearing a dirty raincoat that reminds Grant of the raincoat the strangler was wearing.  And wasn't the man on the train a redhead too?  Or is Grant misremembering that?  Bryan takes on a sinister aspect and Grant suspects that what he saw was a vision of an event yet to take place, that he was somehow in touch with the future. He is determined to prove Bryan to be the strangler and prevent him from killing Sigrid.  If only he could get everyone else to believe him.

Eventually Grant meets up with his publishing colleague, Nate Talmadge, who secured the rights to Holberg's memoir and wants Grant to get the contract signed. Talmdage seems to be Grant's only ally and friend. When a real murder takes place the two men will discover the reason for Grant's visions and the truth of what took place in the train. 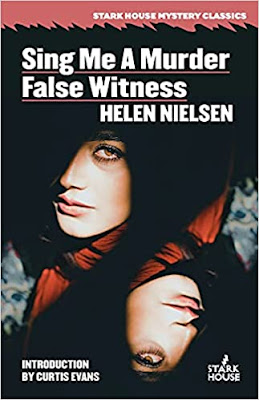 "[The portrait] was supposed to be [of Carl]; but I can't seem to get the face right. I can't  -- this is ridiculous, but I can't remember."

Discretion moves more rapidly than a police car with a screaming siren.

"It's guided thought that conquers; not the guided missile."

"Murders are done every day. A man goes mad and slaughters his children; a nation goes mad and invades a neighboring nation. What's the difference? It's all weird; it's all madness. Someone has just found a new approach to murder..."

NEW EDITION:  Stark House Press has reprinted False Witness in tandem with Sing Me a Murder also by Helen Nielsen.  This twofer volume goes on sale in mid-November 2021.  Sing Me a Murder, a superior crime novel equally worthy of its new edition, was reviewed on this blog several years ago. Those interested in knowing what that other Helen Nielsen book is about can read the post here