Files for Everybody: Fighter Options (PF2) 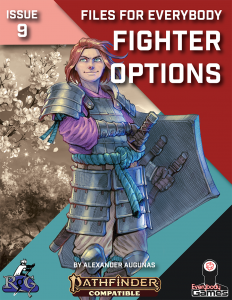 This pdf clocks in at 9 pages, 1 page front cover, 1 page editorial, 1 page introduction (which does contain new mechanics in the side bar), 2 pages of SRD, leaving us with slightly over 4 pages of content, so let’s take a look!

This review was moved up in my reviewing queue as a prioritized review at the request of my supporters.

We begin this pdf with 10 fighter feats for 1st level; among those, the passives are “X Training” feats; Trip Training, Shove Training, Intimidation Training, Feinting Training, Grapple Training and Disarm Training. The design paradigm of these is clear: You use a weapon instead of a skill for a maneuver, provided your weapon has the proper trait, you use an attack roll instead of the respective skill for the maneuver. For the physical maneuvers, this usually means not requiring Athletics, while Deception and Intimidation can be avoided with the respective feats; in these two instances, we also have a modification to prerequisites, allowing you to use a weapon rank’s proficiency rank instead. I am the only one who cares about that, but to me, Demoralize Training would have been a better feat name, and analogue to the other feat names, but that’s just me being OCD, and not a strike against the feats.

The remainder of the 1st-level feats take one action to activate, with Combat Advice being the first: You choose an ally and one opponent and make a fighter roll (explained as 1d20 + proficiency bonus for fighter class DC + key ability modifier); if you succeed, you briefly share proficiency rank for one attack (or until the ally’s next turn on a critical success); on a critical failure, the ally takes a penalty until the start of your next turn. The feat requires both to be within 30 ft, but oddly, not that you actually perceive both.

Parry has the Concentrate trait and lets you make an attack roll, which you compare with the AC of all opponents you’re observing; on a success, the next attack is resolved vs. attack DC (10 + proficiency bonus with used weapon + Strength modifier, or Dexterity modifier if you used a finesse weapon) instead of your AC; on a critical success, this lasts until the start of your next turn, while a critical failure nets you a penalty to AC and Reflex saves against that opponent. This feat is interesting, but it’s also a bit weird, in that it allows the user no control over the enemies against which it applies, save the “observing” caveat; RAW, you check against all opponents, which might end up with you having a critical success against some opponents, and a critical failure against others. Design-wise, I get this decision 100%, but from an in-game logic point, it strikes me as odd, as it potentially rewards limiting your own field of view.

The other 2 first-level feats use a new trait introduced, namely Exhaust; you can only a feat with this trait only once until you take the Rebound Exploration action, which also features the Concentrate trait; one use of Rebound refreshes all your ability to take actions with the Exhaust trait. (That’s the new content on the intro-page, fyi.) Battle Trance would be one of those feats: It has the Exhaust and Stance traits, and it adds deadly equal to the weapon’s damage die to all weapons you wield, and the effect increases as usual for striking weapons; if the weapon already has the deadly or fatal trait, you instead increase the die size by one step. Battle Trance lasts for Constitution modifier rounds and takes one action to activate. Con 14 is a prerequisite to ensure the feat is viable, which also extends to the next feat. For two actions, Second Wind can be used when your current Hit Points are less than your total hit points; this nets you 3 + Constitution modifier temporary hit points that last for 1 minute.

For 2nd level, we have 5 feats: Swift Aid takes an action and can eb sued once per turn, allowing you to Aid attacks of an ally. Which struck me as weird. Pretty sure that the action icon here is wrong, as the vanilla Aid already requires spending an action. Or this was supposed to eliminate the need for the reaction, but I’m not sure here. Size Up lets you Recall Knowledge using Perception, and nets you information on fighting prowess, whether the target uses offensive or defensive fighting styles, etc.; It’s nice to see that the control here remains firmly in the GM’s hands. One Step Ahead is a stance and makes you choose an opponent. If said opponent tries to use Manipulate and triggers and AoO, you disrupt the attempt if you hit, and can, on a critical success, even regain your reaction. Stance lasts for 1 round. Bravery is a reaction with the Exhaust trait, and makes a failed fear effect save a success, a success a critical success. Lightning Reload is another Exhaust action (1 action) and requires Dex and Con 14M it makes all trained weapons reload 0 and thrown weapons can thus be drawn as part of the same action as attacking them; the stance lasts for Constitution modifier rounds.

Among the 4th-level feats, we have one that builds on Second Wind, with scaling increases to temporary Hit Points. For one action, Distance Thrower is a stance that increases the distance of weapons you’re a master or legendary with. Half Haft is a stance that lets you one-hand 2-handed melee weapons at the cost of damage die decreasing by one size; when entering of exiting the stance, changing grip appropriately is a free Interact. With the Exhaust trait, we have two feats that also sport the Fortune trait: Unmoving requires wearing armor, and nets you a circumstance bonus to AC, save DC, or saving throw equal to the armor check penalty. I like the idea here; long-term, this is a feat that bears close scrutiny, though. Rebounding Attack is a reaction when you miss a Strike with a weapon you’re an expert with; it nets you a reroll, but can’t do anything for you on critical failures.

For 6th level, we have a total of 7 feats: Boundless Stamina lets you use up to 3 Exhaust actions before you need to Rebound. Armor Training decreases the Speed penalty by 5 feet for every 2 by which your Strength exceeds the armor’s Strength value; it also nets you minor physical resistance based on armor type. This feat makes sense in so many ways. I love it! Assured Strike is a feat with the Exhaust trait and can be triggered when you Strike an opponent and hit, dealing average weapon die damage, rounded down. The second feat with Exhaust, Determination lets you make an ability check against negative conditions, with the ability depending on the condition, and if you succeed, you get to decrease the respective condition value. Minor nitpick: The “Success” line has a formatting hiccup.

If you’re wielding a shield and are expert in Reflex saves, you can, for two actions, use Shielded Evasion to Raise a Shield. Until the start of your next turn, your Reflex save successes become critical. Makes so much sense, 2 thumbs up! Also, for two actions, we can make the classic Dazzling Display, but only if you are a master with simple and martial training and have Intimidation Training; this is a 60 ft. AoE Demoralize that uses your attack roll vs. Will DC of affected foes. Shrug It Off builds on Second Wind, and nets you temporarily half your level as fast healing for 3 rounds when using it.

For 8th level, we have two feats: Armored Assault enhances your unarmed attacks by your armor’s potency rune, and if it’s made from special materials, lets you bypass resistances. Hustled Step is a Flourish and Exhaust feat that requires no action and nets you a free Step. Finally, we have 3 10th-level feats: Quickened Combatant also has Exhaust and Flourish as traits and requires no action but must be used when you begin your turn; you get quickened 1 until the end of your turn and must use it for Strike or an attack action. Bolstered Stamina takes only one action but can be used only once per day: It nets you an instant Rebound. Battle Routine is a Stance with the Concentrate and Exhaust traits, one action to activate, and builds on Assured Strike; you can maintain it for Constitution ability modifier rounds, and while you do, Assured Strike no longer has the Exhaust trait.

Editing and formatting are good on a formal level, very good on a rules-language level. Layout adheres to the series’ two-column full-color standard, and the artwork featured is nice. The pdf needs no bookmarks at this length.

Alexander Augunas’ fighter options are bold and let you do some rather neat things; from the anime-inspired Battle Trance to the iconic option to use the shield to withstand dragon breath, the supplement offers quite a few feats I’d consider to be gold. The usage of the Exhaust/Rebound-mechanics to balance the more powerful options is nice as well and discourages from building nova-fighters that are very strong, and then need a rest after every combat…which is rather clever, design-wise. I like this supplement; it’s not 100% perfect, but certainly worth getting if you’re looking for some fancy fighter tricks. 4.5 stars, rounded up due to in dubio pro reo.

You can get this pdf here on OBS!

You can directly support Everybody Games here on patreon!

If you want to leave a tip, you can do so via paypal, or by joining my patreon. Thank you.