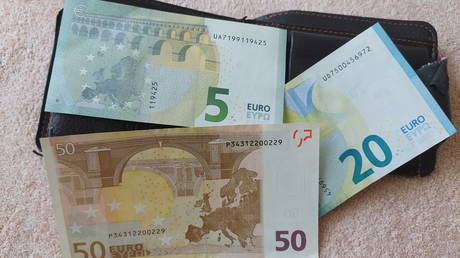 Helsinki has banned the “export” of euro banknotes to Russia

Finnish customs officials have begun seizing cash from Russians returning home across the border, media outlet Fontanka reported on Monday, citing a man who claimed his money was confiscated.

A resident of St. Petersburg identified only as Yuri was returning from a business trip to Serbia via Finland. He was driving back to Russia on Saturday evening when he was stopped at the border.

When asked if he had any money with him, Yuri showed the customs officials €1,390 ($1,390) in cash. The man said he brought all of it from Russia and did not acquire any additional money abroad. He also had rubles and Serbian dinars, but the customs officials were apparently only interested in the euros.

“They took only euros,” Yuri told Fontanka, adding that he was told he was “prohibited from taking the money to Russia.” The customs officials said he could either give all of his euros to “someone entering Finland” through the same border crossing, or hand it over to customs and get it back the next time he is in Finland. The man agreed to hand the money over, provided there was no time limit on when he could get it back.

According to Fontanka, Yuri is not the only Russian who has been subjected to these restrictions, which were introduced due to the conflict in Ukraine. Other travelers have reportedly shared similar stories on the outlet’s Telegram channel.

Finnish Customs officially warns on its website that “exporting banknotes of official EU Member State currencies to Russia is prohibited,” but says there are exceptions for money needed for diplomatic purposes and the personal use of those traveling to Russia.

The Russian-language version of the website specifically states that “taking unused cash to Russia by an individual living in Russia and returning home” does not count as “personal use.”

The measures are described as “export sanctions” related to the conflict in Ukraine, and it is not clear when they were introduced. So far, the Russian authorities have not commented on the development.